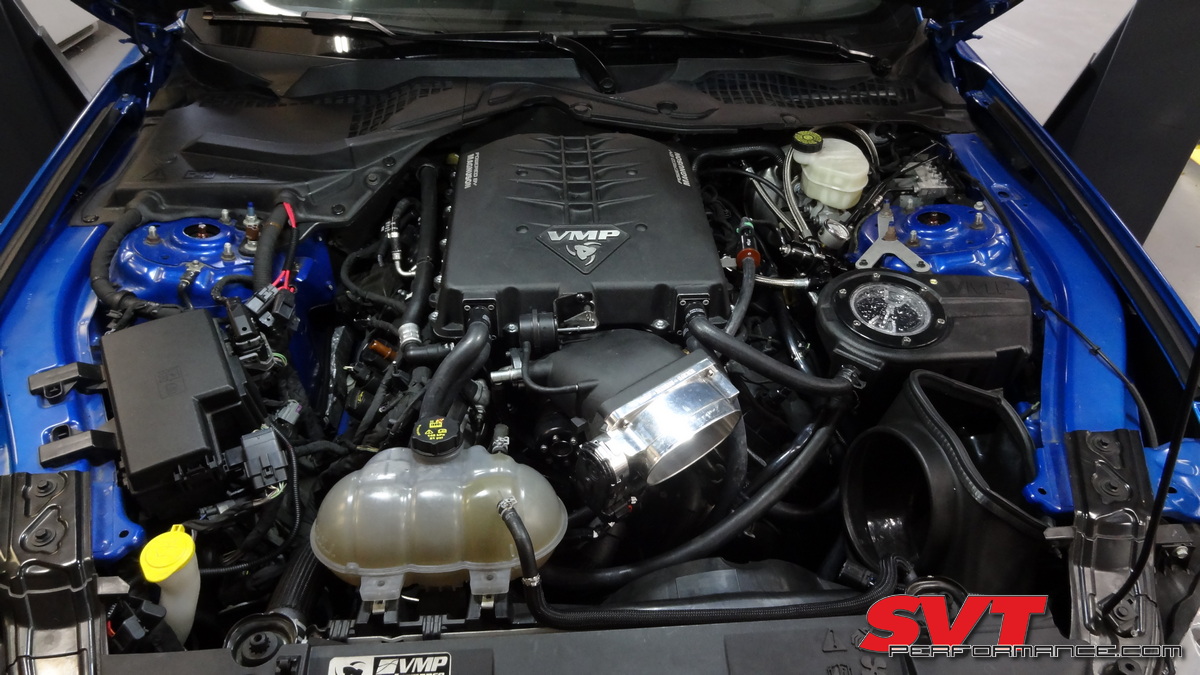 Few things get my inner scientist going like seeing practical engineering advancements being tested, and the crew at VMP Performance do that on the daily. We recently stopped by and found them working away on several projects that will soon be coming to a Mustang near you. One car on the scene that should be familiar to anyone in the Coyote Performance World is VMP’s own Chuck Harter’s 2019 10R80 equipped Mustang GT. It has been a VMP Odin blower test car since the program began, and they are far from finished with it. 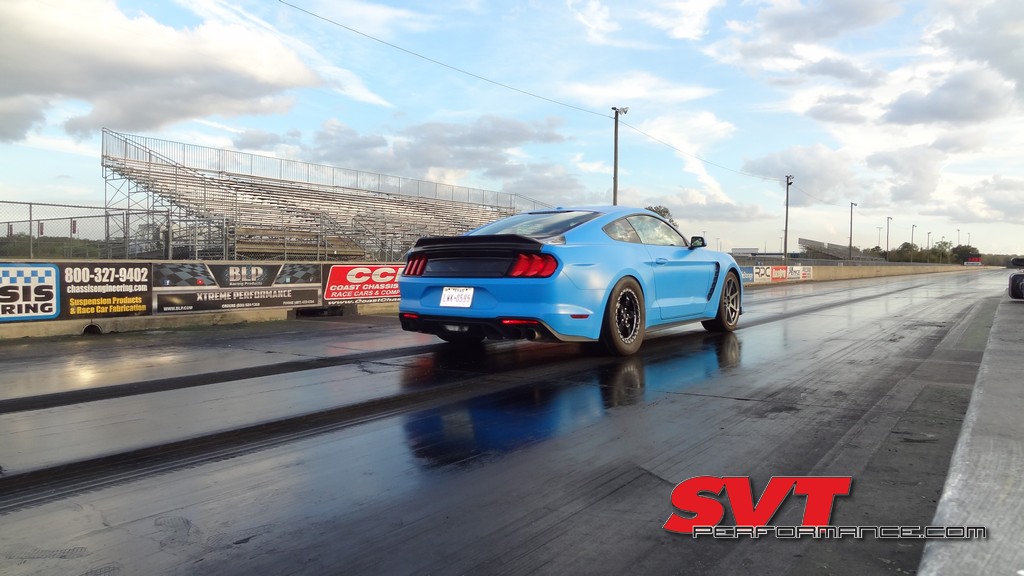 Chuck's S550 has been a test mule for pretty much every piece of VMP Odin hardware you can imagine.​
As it sits, Chuck’s car is sporting VMP’s latest Stage 3 Odin 2650 TVS Supercharger featuring Magnuson’s DFT port design. Magnuson is VMP’s manufacturing partner for the Odin line of blowers, and they bring over 60 years of supercharger design experience to the table. The VMP/Magnuson team has been producing some of the most impressive Mustang blower kits in recent memory and there’s a lot more on the way. If you’re interested in seeing inside a VMP Stage 3 Odin 2650 take a look at this vid:


​
So what advantage does the Stage 3 Odin design have over the Stage 2? The short answer is increased airflow via reduced restriction in the intake tract. The Magnuson DFT port on the rotor bearing plate is aided be the VMP 163mm throttle body and VMP’s new aFe produced cold air intake. That adds up to the Stage 3 Odin making two more pounds of boost at 20,000 RPM rotor speed than the Stage 2 model. If you plan on running your Coyote over 800HP the VMP Stage 3 Odin would be the version to shop. 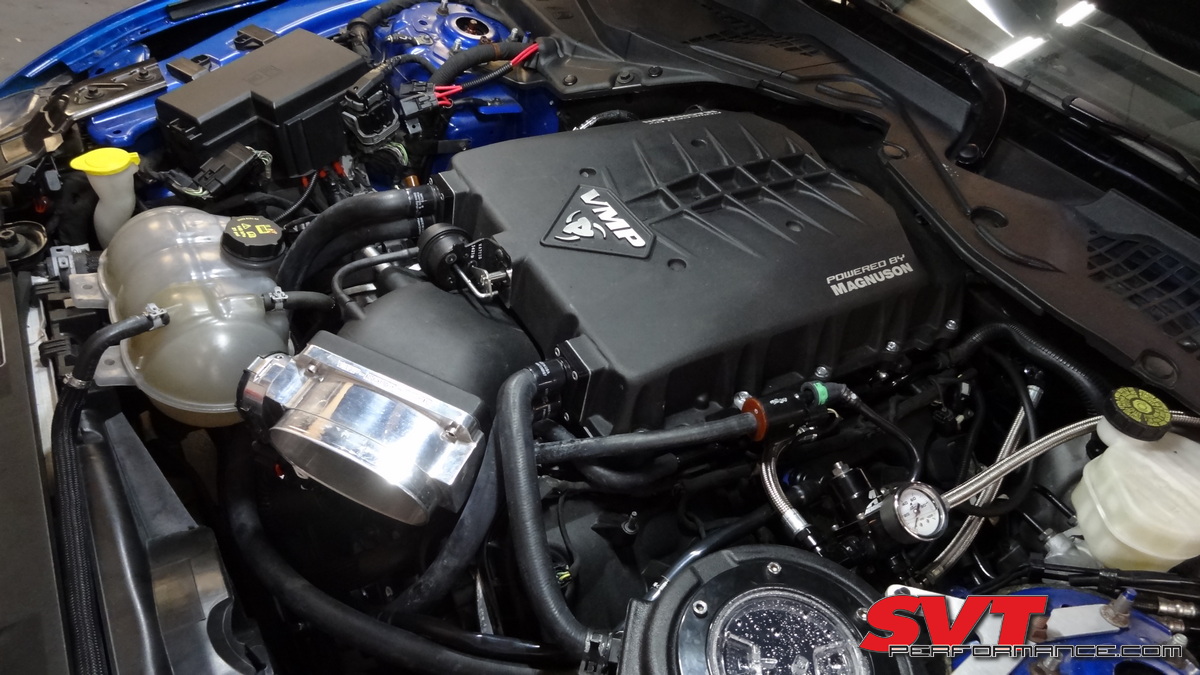 If you buy an Odin Blower kit, do yourself a favor and spring for the full package with the upgraded throttle body and CAI. The total package is the way to go.
​
But wait, there’s more! Chuck’s car is currently the test mule for the 1st, and currently only, VMP Odin Ice Tank. VMP designed this tank to accept the dual intercooler line design of its Odin Supercharger without the need to run an external Y connection. The Odin Tank instead features dual inlet ports. It is constructed of roto-molded plastic and Made in the USA. By making the part from molded plastic VMP was able to take advantage of the various contours and dead space available under the hood in order to make the tank extra deep. This allows it to hold about 10 pounds of ice while still having enough space to insure no ice is ingested by the discharge port. The tank also features a quick drain valve to free up volume between runs and it fits perfectly with the VMP Odin CAI. 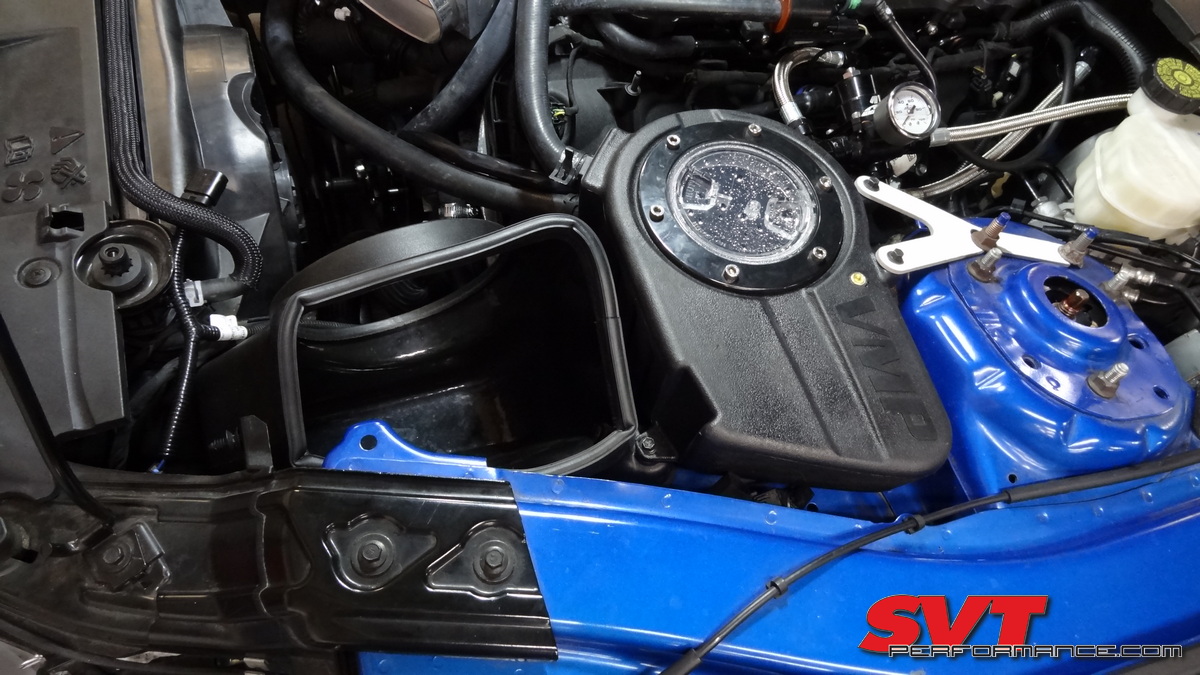 The Odin Ice Tank gives a huge performance advantage over smaller, non-loadable, coolant reservoirs. ​
Finally, to insure minimum belt slippage Chucks car is setup with an 8-Rib belt kit and a 20% overdrive balancer. This allows the Odin blower to turn higher RPMs with larger pulleys. Larger pulleys have a greater area of belt contact surface (belt wrap) than a smaller pulley setup, thus preventing power-robbing belt slip. To further aid in the battle against belt slip VMP has designed a No-Drill bolt on idler pulley bracket that cleverly mounts to the Coyote front cover. This bracket routes the blower belt in a way that optimizes the function of the tensioner to keep the blower belt properly taut. 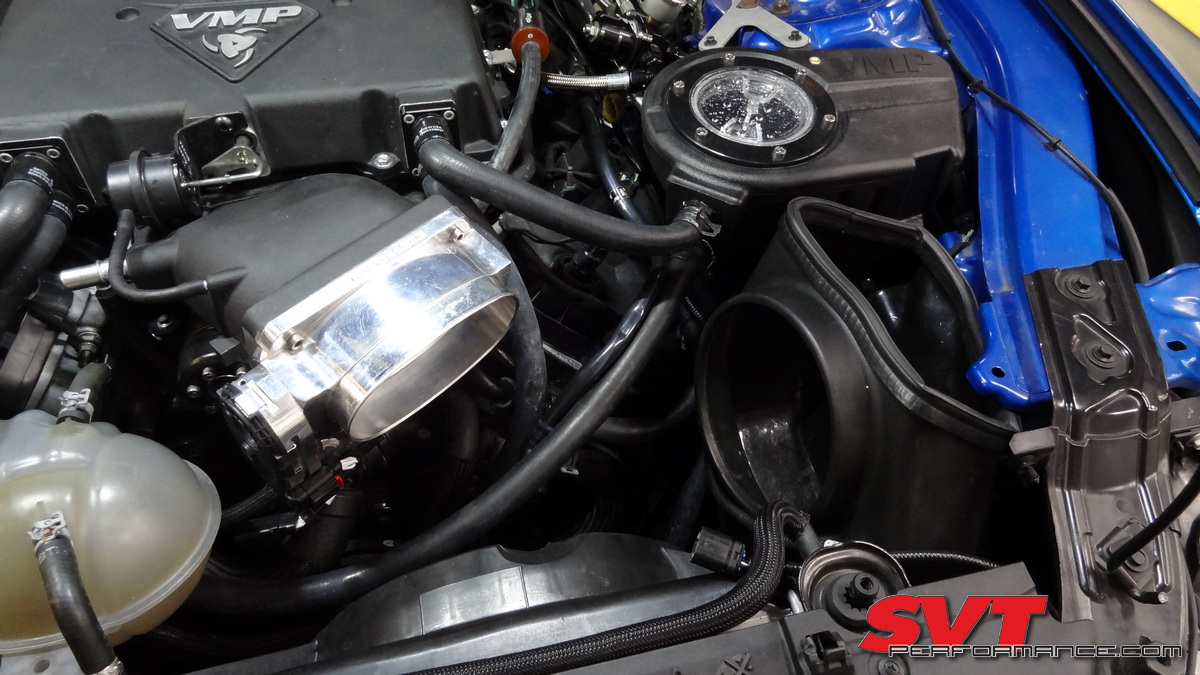 Here you can see the dual return lines going into the Odin Ice Tank.
​
During our visit, the mechanics were preparing to swap the currently installed bracket for an experimental one that moves the idler locations around a bit. That small change in one small part is a good example of the design philosophy behind many of VMP’s endeavors. Justin and his team are always looking for ways to improve their products (or design new ones) in order to go just a little bit faster. That’s attention to detail you have to respect. And while Chuck’s car hasn’t made a pass on the current setup, it is knocking on the door of 1,100 rear-wheel horsepower and has previously laid down 60-Foot times in the 1.3 second range. We’ll let you do the math on what kind of 1/4 mile time that should add up to. We’ll have more VMP content coming up in the very near future, so if you’re interested in learning more about their upcoming 3100 TVS blowers keep an eye on SVTP. 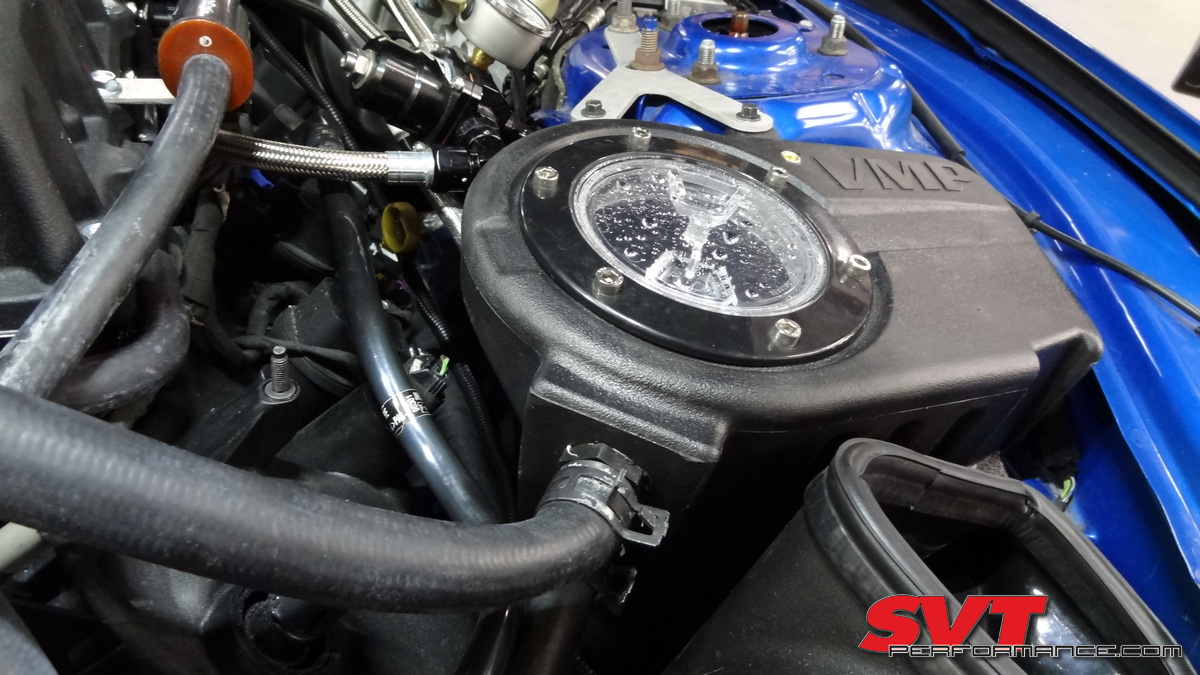 The Odin Ice Tank is designed to use all the available space in its mounting location while still fitting with the Odin CAI. 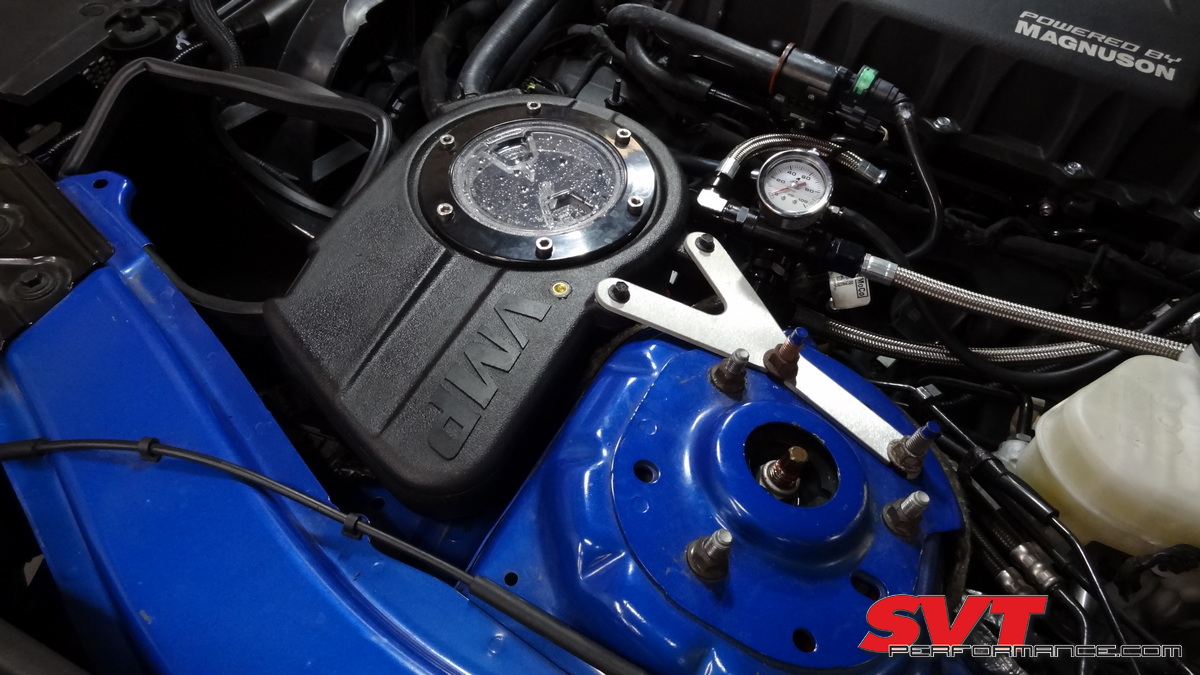 For the first part out of the mold, this particular part fits very well. That bracket mounted to the strut tower will be powder coated black for final production. 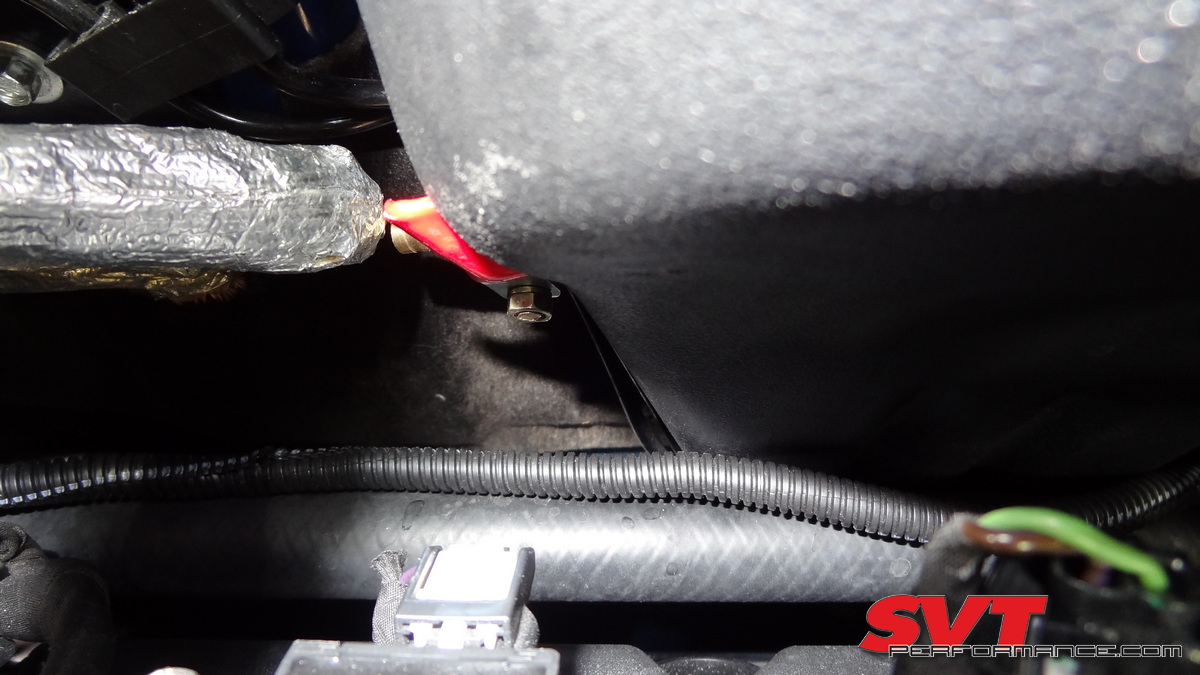 It's tough to see in this pic, but the Odin Ice Tank includes a drain valve to allow racers to remove excess water at the track between runs.
​
-Sid297
Last edited: Dec 16, 2020
Click to expand...

Thanks for stopping by travis!

[email protected] said:
Thanks for stopping by travis!
Click to expand...

Looking forward to stopping by again.
It's putting down almost 1,100 horsepower? Is that on a factory short block?

speeddemon2000 said:
It's putting down almost 1,100 horsepower? Is that on a factory short block?

That is still a ton of power for that setup.