Here are a few pics of my A50XS Coyote in a Factory 5 MkIV roadster. 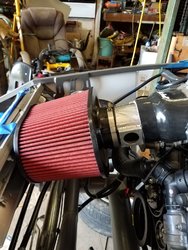 Not too much for posting with captions. I think most are self explanatory. I am in my second year on the build, got the parts in Nov 2017. All new parts, TKO 600, 3.55 trkloc IRS. Wilwood 6 piston front, 4 piston rear. Of course the A50XS is the heart of the whole package. I have been dodging the behind the dash wiring, but have about painted myself into a corner and cannot avoid it now.
I had to put a shallower pan on for ground clearance. The Ford pan was a 12 qt work of art, baffles, dams and sumps. I will try to take a picture. I need to post it for sell anyway.
The Moroso is an 8 qt, so maybe it is up to the task.
Last edited: Feb 21, 2019

Love the build. That Traction-Lok might not last if you launch hard on sticky tires. But for street fun you’ll be fine.

The heaviest of these models weigh less than 2500 lbs. Hopefully, I can get a decent launch with good tires without frying the clutch pack. Probably more street cruising than straight line track. I hope to get it on the track at Barber Motorsports some day.

Here is the power steering cooler. It is an old Moroso trans filter and cooler. I removed the filter, cleaned it up and plumbed it in the return line. Other builders say the steering needs a cooler and it adds a little more fluid volume.

Here are some poor videos of the engine's first runs.
There is a glimpes of my best mechanic friend. He wanted to see how the trans shifted out. We had to pull the trans that morning, due to the wrong length pivot bolt for the clutch fork. I am using a hyd clutch with external slave cyl. The short cold air tube seems OK, will have to see how it takes to a Lund tune.

Here are a few pics. Been working on getting all the sheet metal installed. I lack a couple of bolt holes for the passenger seat, before pulling them and riveting in the sheet metal. Should have cleaned up the clutter, but that is how it is. 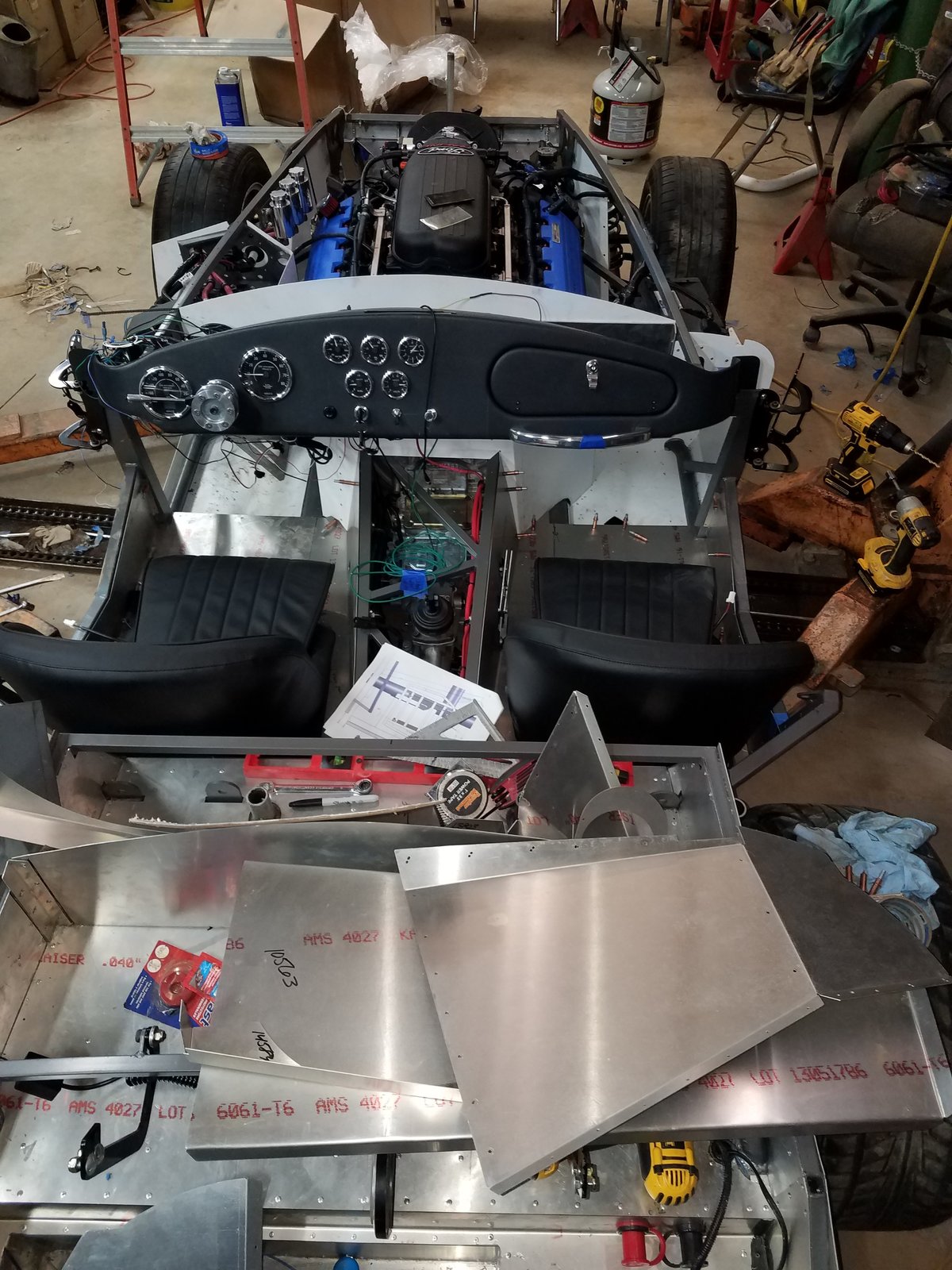 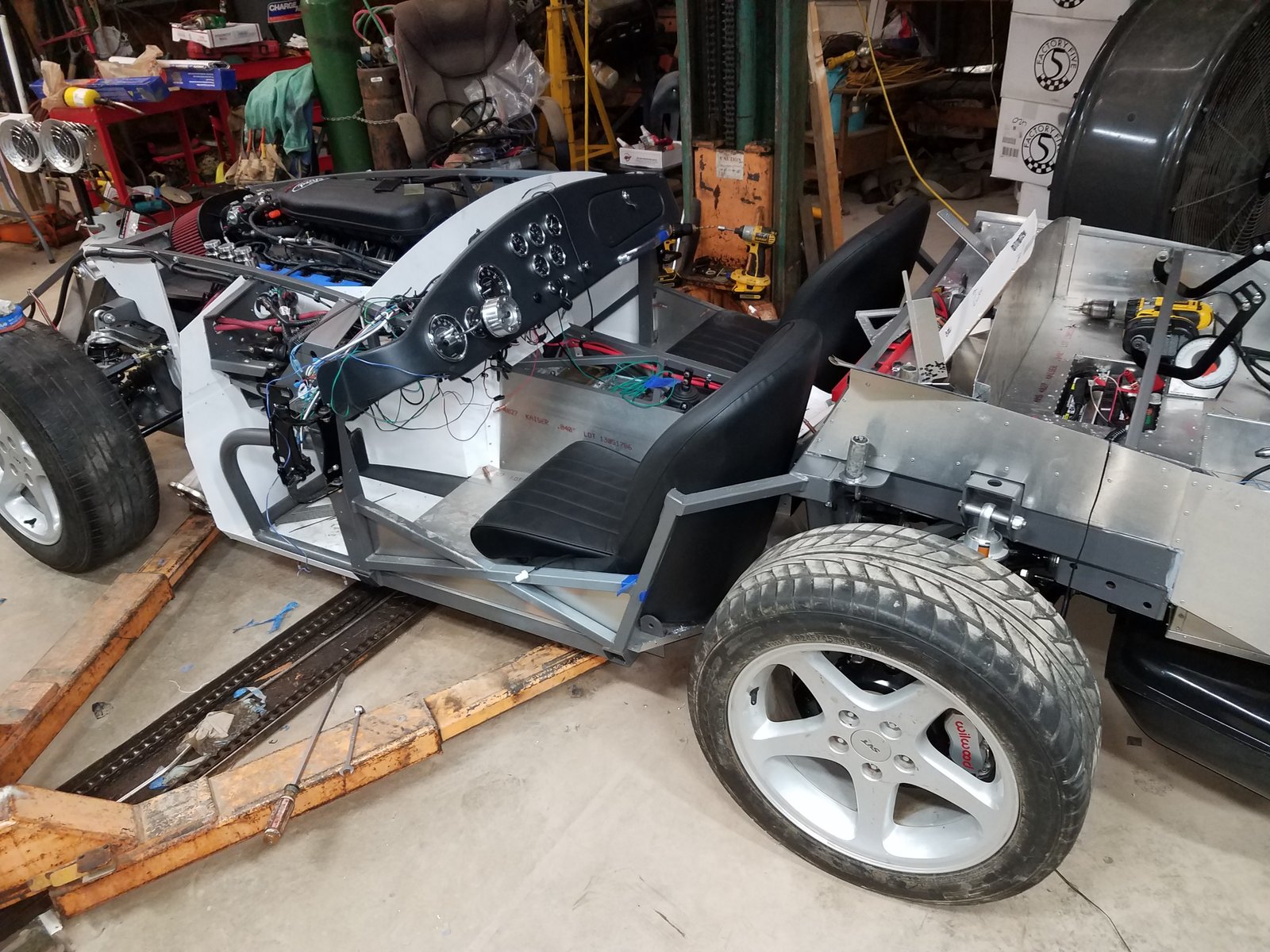 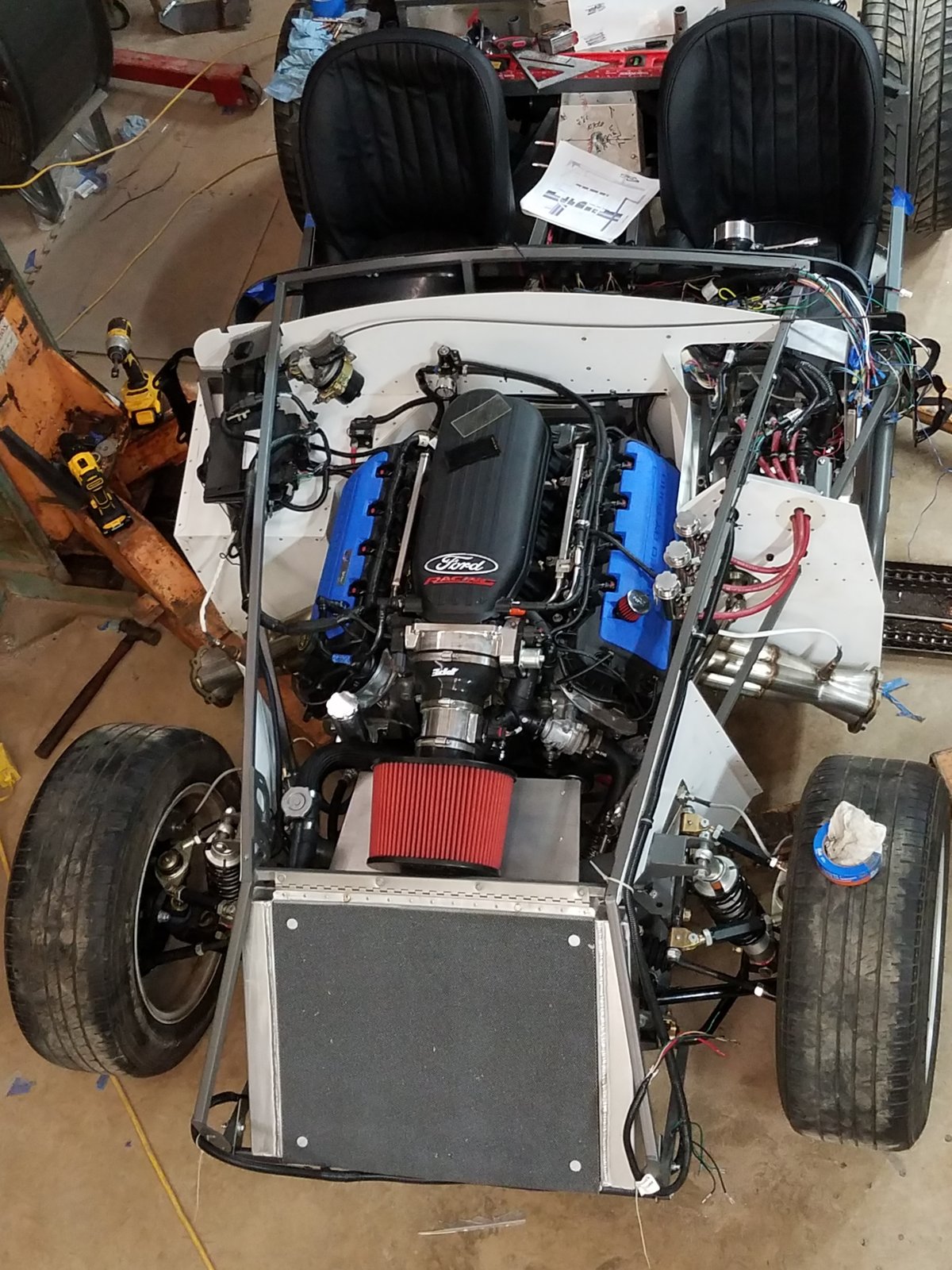 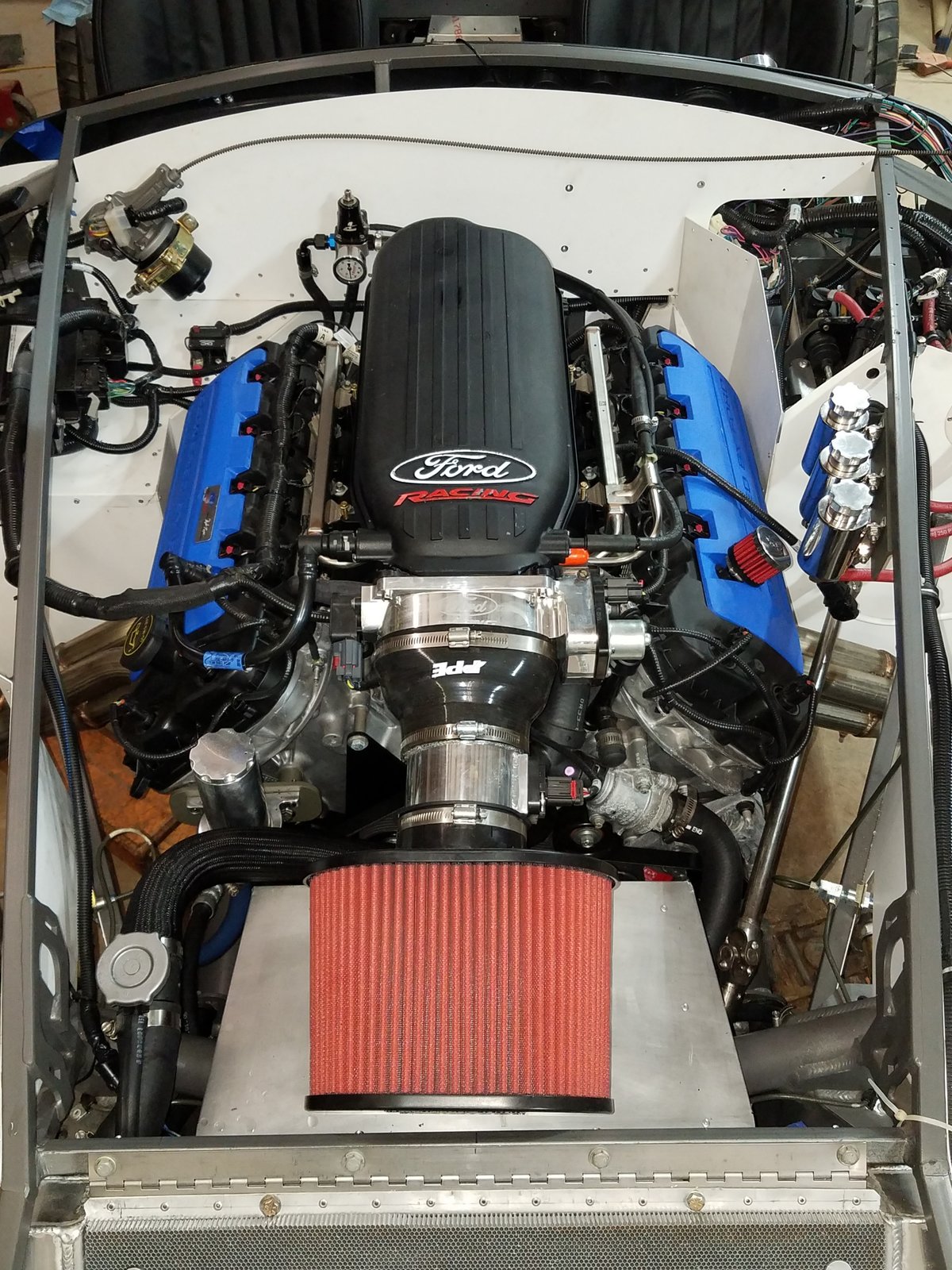 Got the new tires on the Halibrands. Brought the car down to the house, before going back to the shop for more work. Gotta give a lot of thanks to Ed for so much help in getting this far.

Here are some of my latest pics. 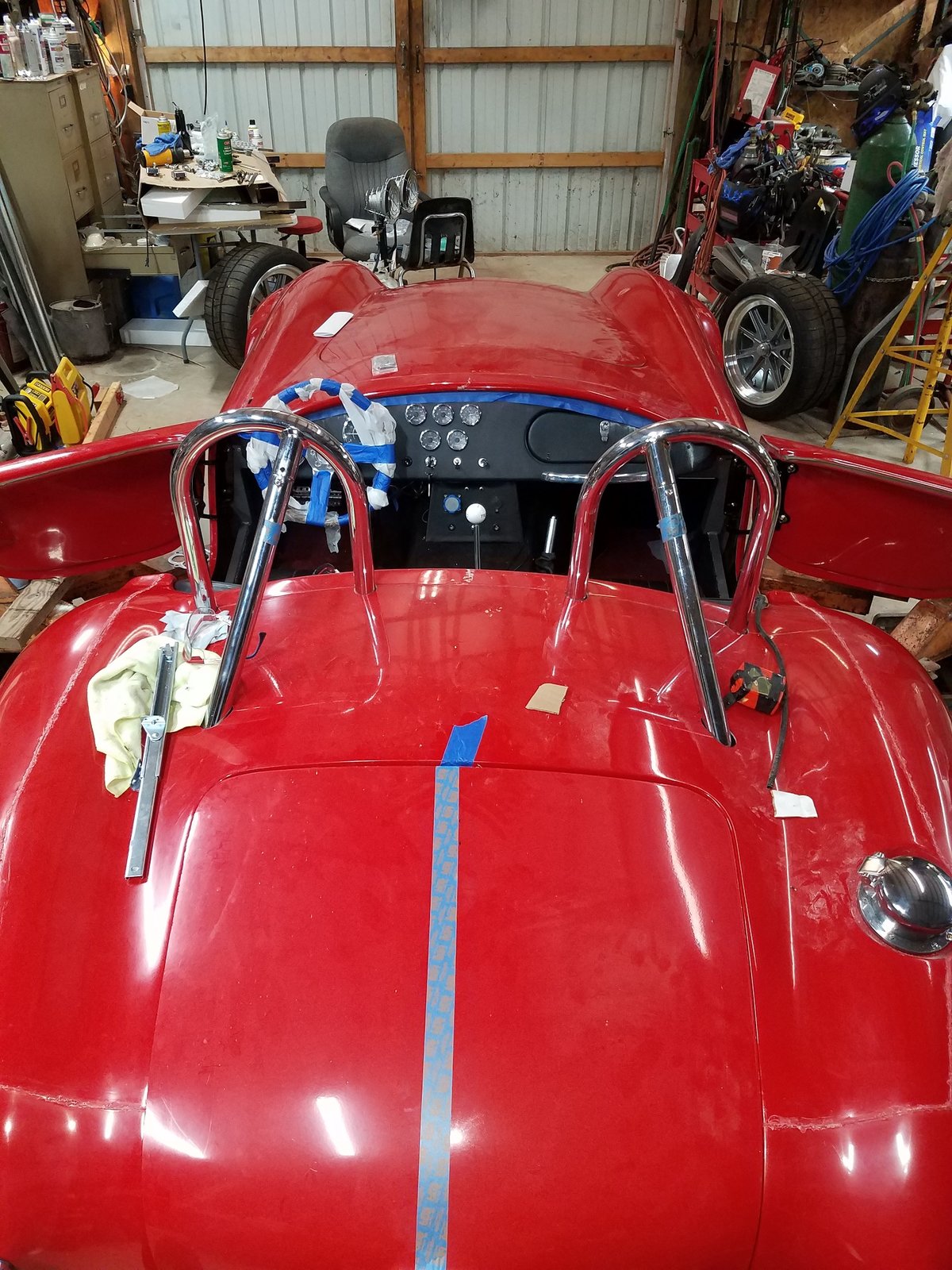 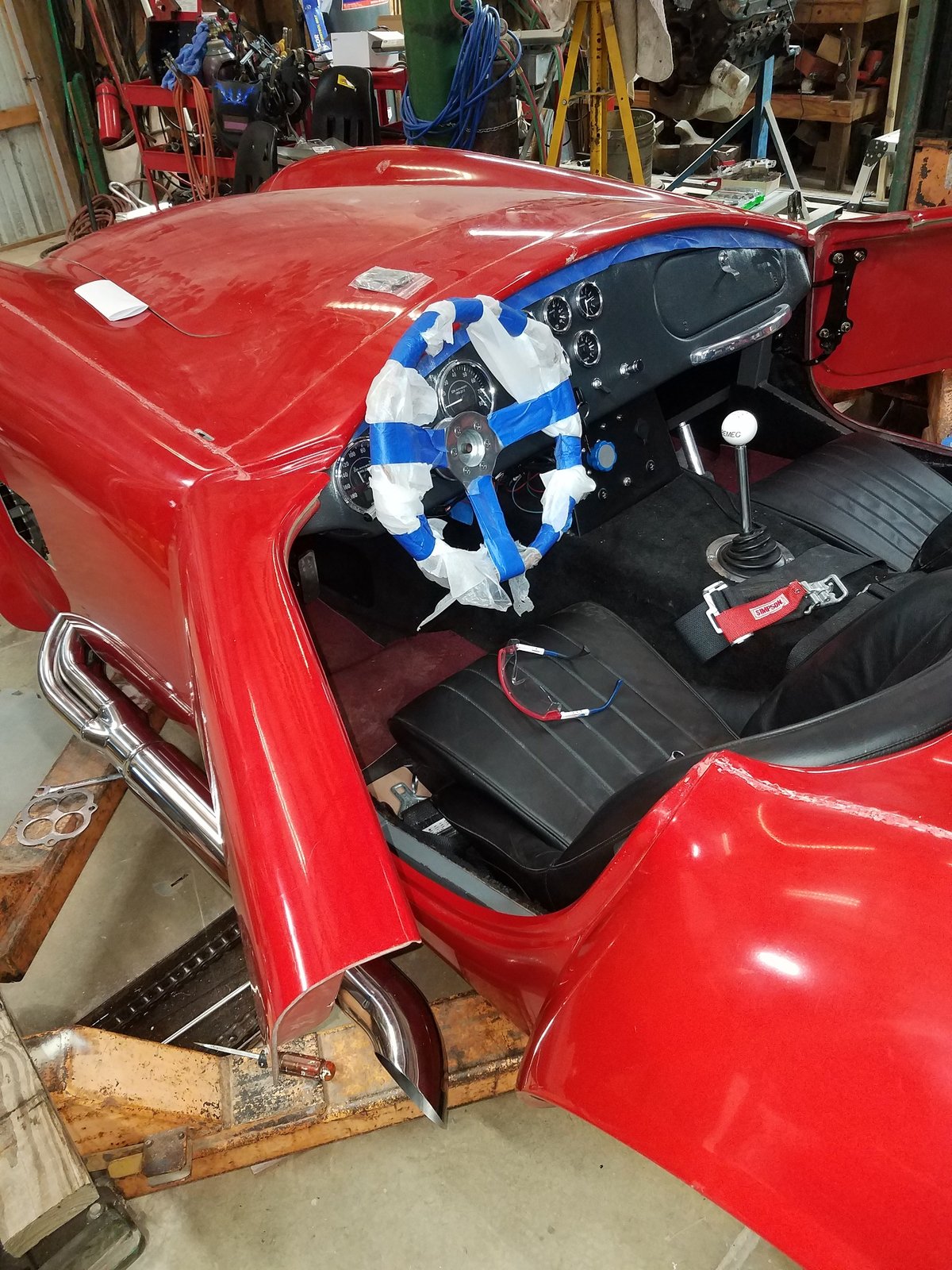 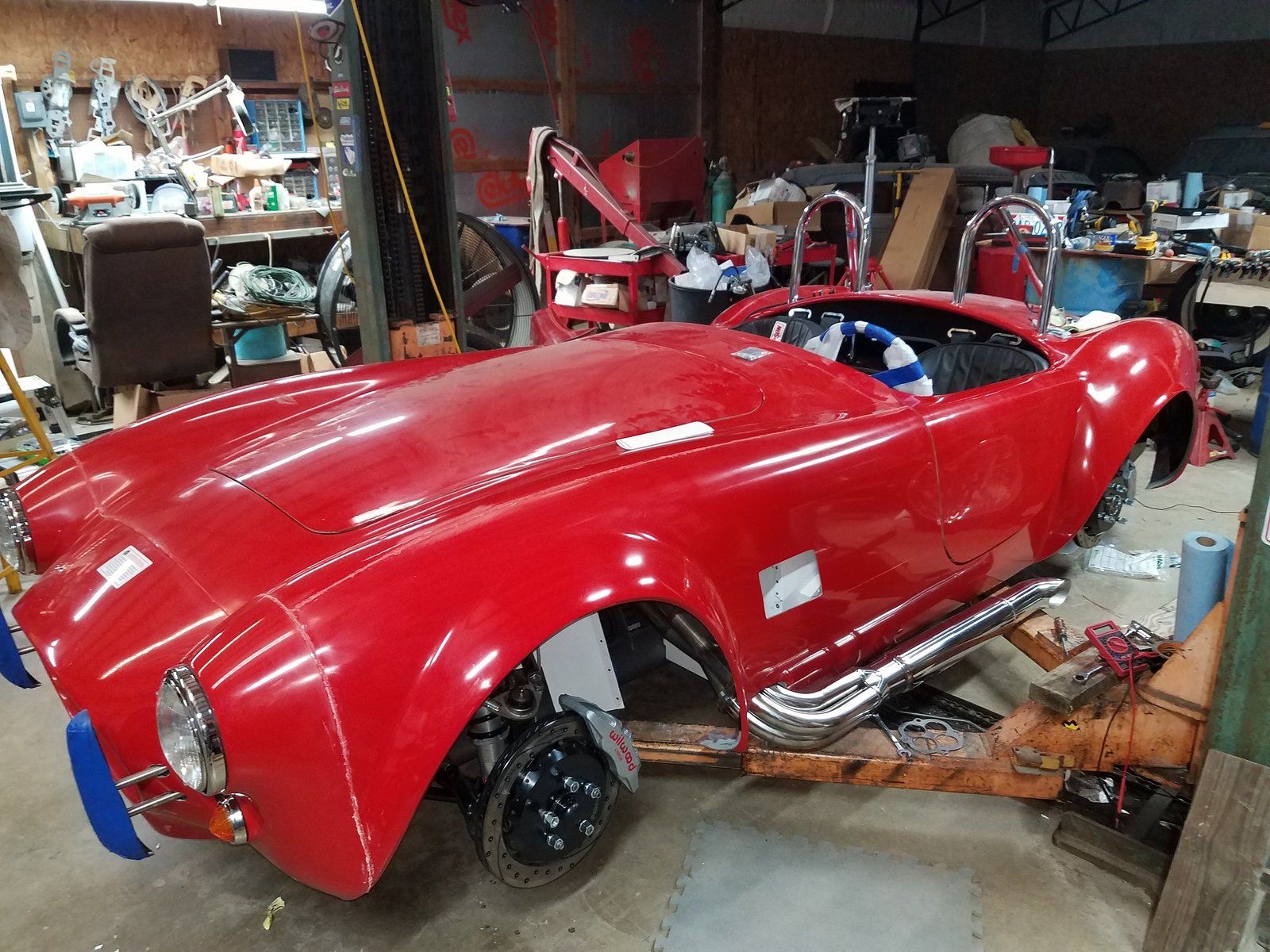 I sent some pics to Grundy's for insurance. It is one of the things required for registration/tag.
After insurance, it goes to court house for inspection.
It is still in gelcoat and will be until I can find an experienced body and paint. 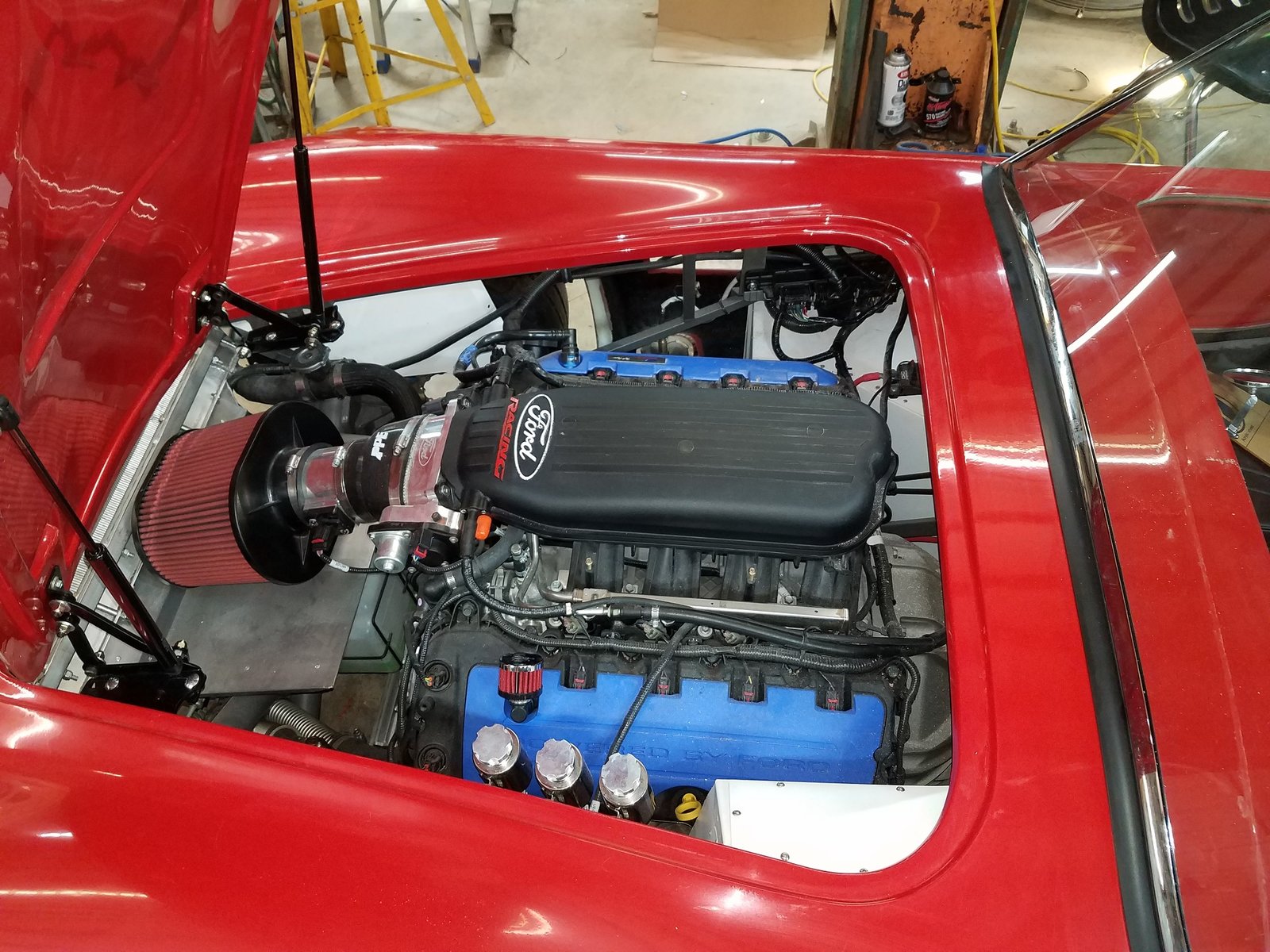 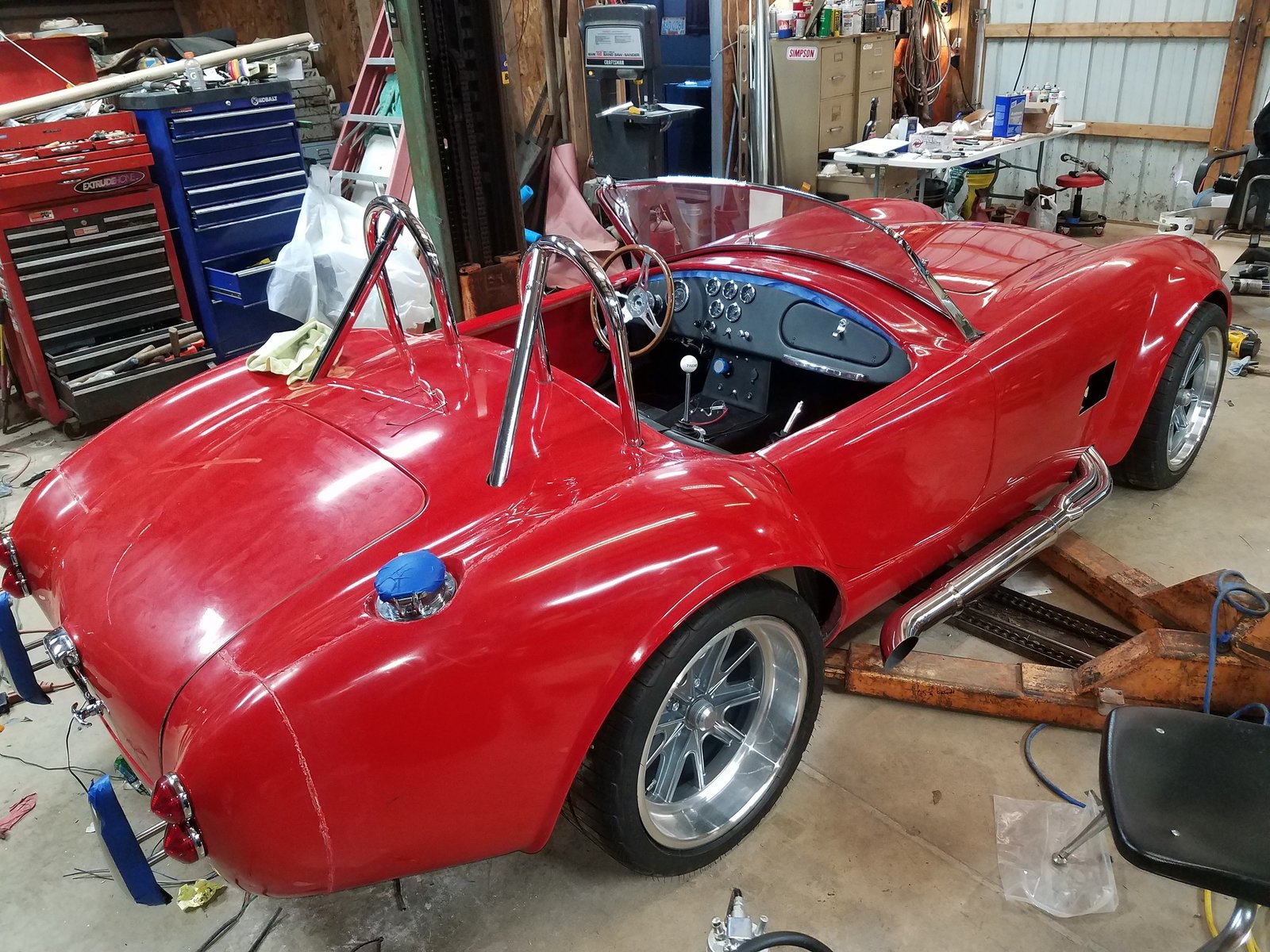 Well, I finally got my state inspection. Had to deal with a jack-leg state inspector. I waited over 60 days for him to show. After making numerous calls to the dept. He finally showed.
He called, asking if I had a lift to inspect the bottom.
Very uncommon for the other Cobra builds in my state.
Fortunately, I do have a lift.
I called the dept again and relayed his curt attitude. The dept said, if anything did not go right to call his supervisor. Short story, he looked at the engine, raised the car and looked at the trans and some ground cables. He said, OK, sign here.

I finally had a VIN. With the court houses closed due the C virus, a tag is not available.
I printed out a tag on paper, Tag Applied for with date and Vin. So far the police have been good.

I bought a SCT X4 a couple months earlier and the state was not on lock down. I got in my data logging, but have to make a few changes.

Tuner got the car running good, but surged heavily at light throttle crusing, any speed.
On the second 2500 to 6000 rpm pull the engine quit.
If fired right back up and ran normal.

The tuner told me all the parameters were good. It even showed the computer adding ign timing. ,,,running Sunoco 93 octane pump with ethanol.

The two issues were caused by the maf sensor being too close to the throttle body.

I sure was proud of my cold air plumbing and filter.

I had enough stuff lying around to cobble up another set up, short of a smaller filter. Thank goodness for Summit. I should have the new filter by Monday, but we are under a travel ban. Maybe, I can drive to get some food in it.

I had to remove my coolant overflow reservoir. Since it was not visible, I used a plastic Dorman tank. Now I need something to fit within a specific space and better looking than a plastic tank.
I am looking at a Canton 80-201. I will have to make some brackets.
After I get the filter in place, I will know the space available.
Here is a picture of my mock up.

My 1st choice for body work and paint is a year out.
Hopefully his credentials will help me tolerate driving it around in gel coat.

Here are a couple of pics of my new cai and overflow tank. The engine turned panel to the left of the overflow tank is a deflector for the fan air. It would hit the air filter and upset the maf readings.
I did the machine turning free hand on a drill press.
I need to fab some covers up for the engine and will probably use sheet alum, machine turned for the finish.
I put Shark Hide on the bare alum to preserve the finish. 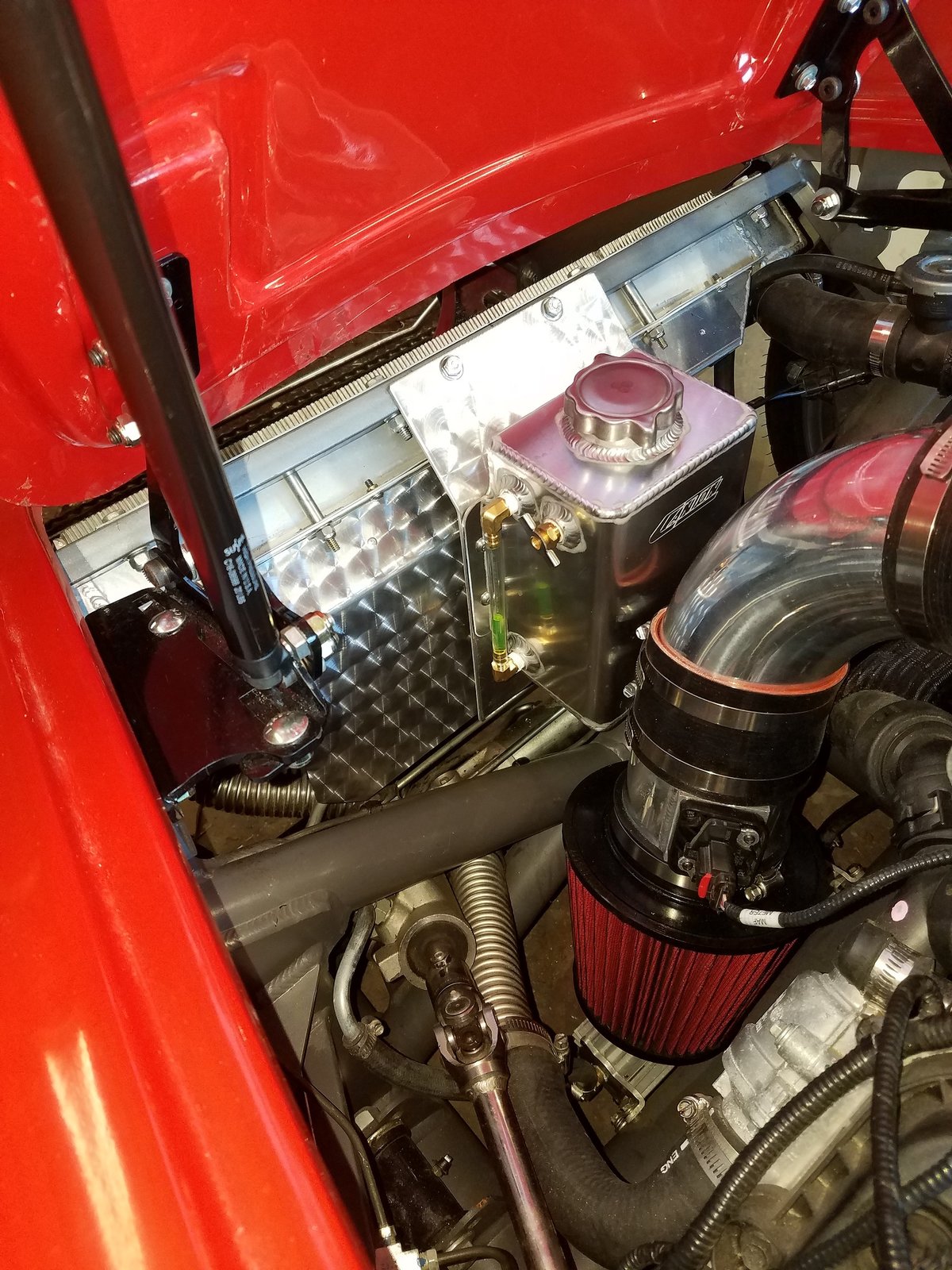 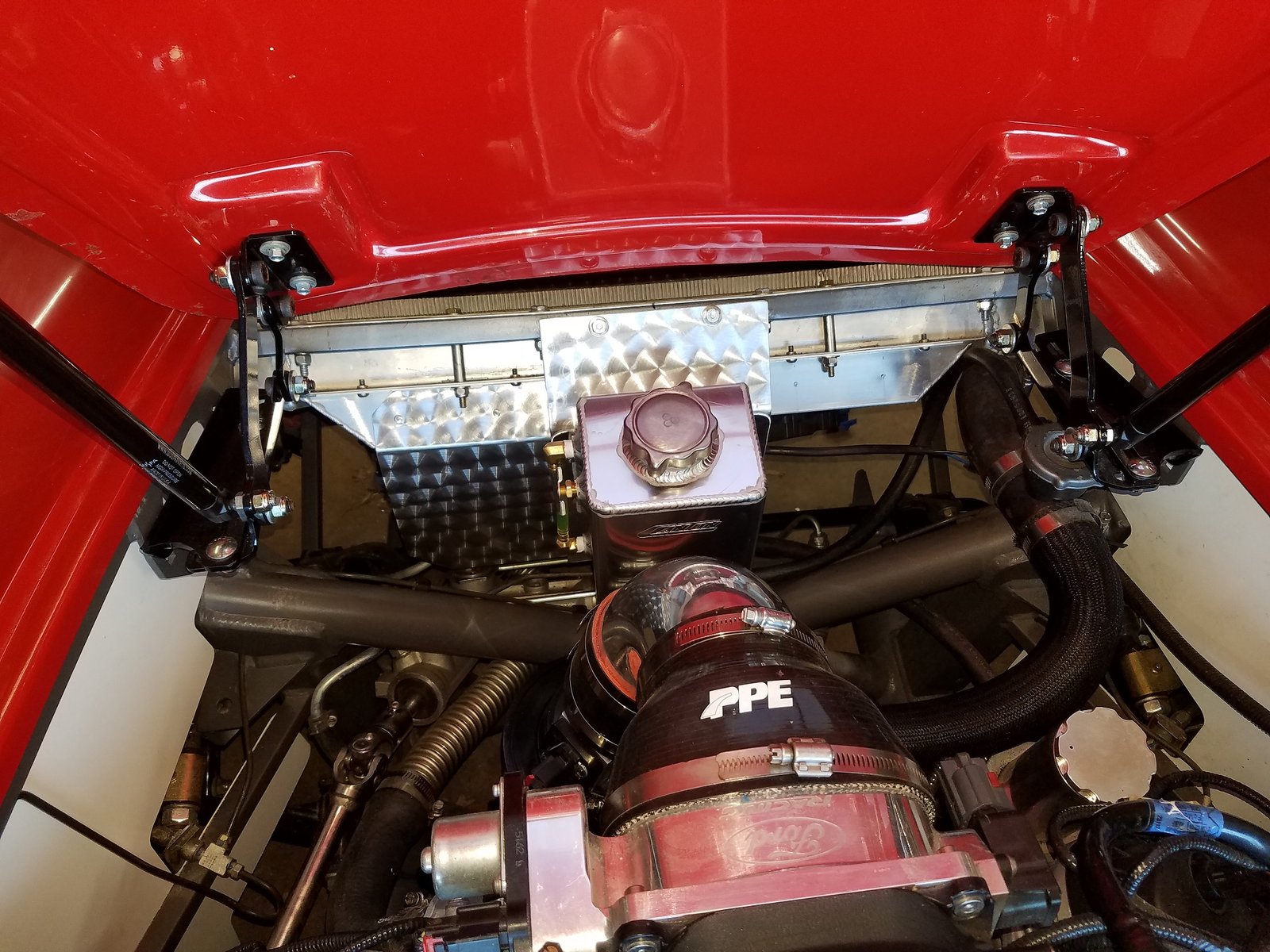 Overflow tank is larger than needed, but was tough finding the right size and look.

Need some suggestions on a shift light. While running out some tunes in the car, I was trying to watch too many things and touched 8000 rpm. Engine never quit pulling and I caught it just short of 8. Ford says they are good to 8K, but should have been watching. I still have 2 tunes to try and will definitely be more attentive, but could get into a little cat and mouse and want to see a shift light before I hurt something.
I will start doing some searching, but nothing like first hand advise. Thanks for any suggestions.
...forgot to add 5.0 Aluminator crate engine, see previous post for more info.
Last edited: May 13, 2020