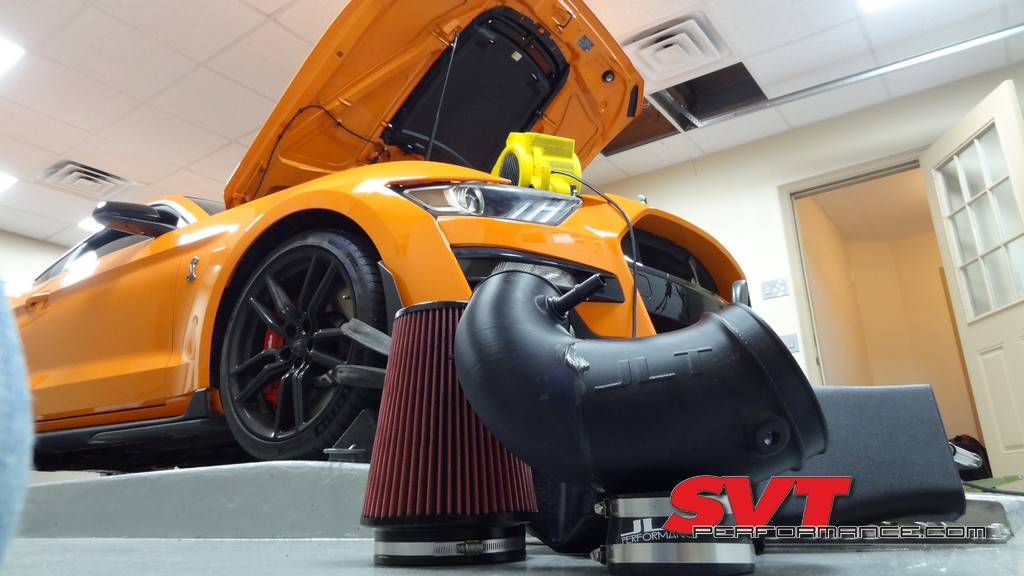 In case you guys missed it, let me catch you up. SVTP has been working with VMP Performance to test the performance increases we can squeeze out of the recently released 2020 Shelby GT500 Mustang with some typical bolt-on parts and tuning. After seeing some impressive stock boost level gains, both at the track and on the dyno, it was time to test out a classic Mustang mod; a JLT Cold Air Intake. 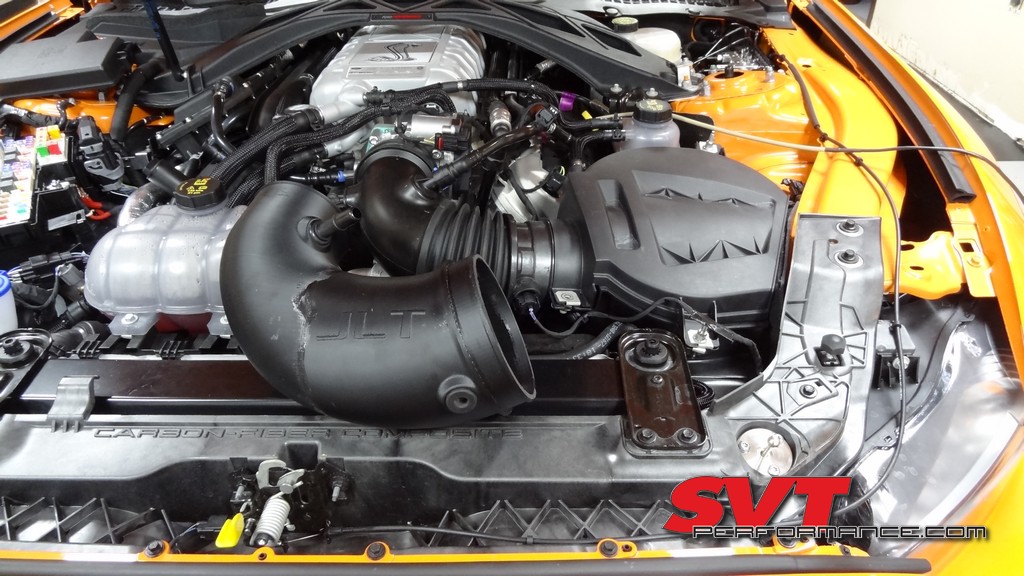 The JLT intake tube design is simple and effective. Smooth airflow is a key to making power.​

The SVTP community is well aware that a CAI is a member of the holy trinity of basic bolt-on mods for any car (intake, tune, and exhaust for the uninitiated). And for close to twenty years the folks at JLT have been churning out some of the Ford Performance Nation’s favorite kits. The styling and materials of the kits may have changed some over the years, but JLT’s share of the intake market continues to grow. Part of that growth is due to their commitment to performance and the speed at which they introduce kits. Modern 3D printing has cut design and production times significantly, which leads us to the star of this feature. 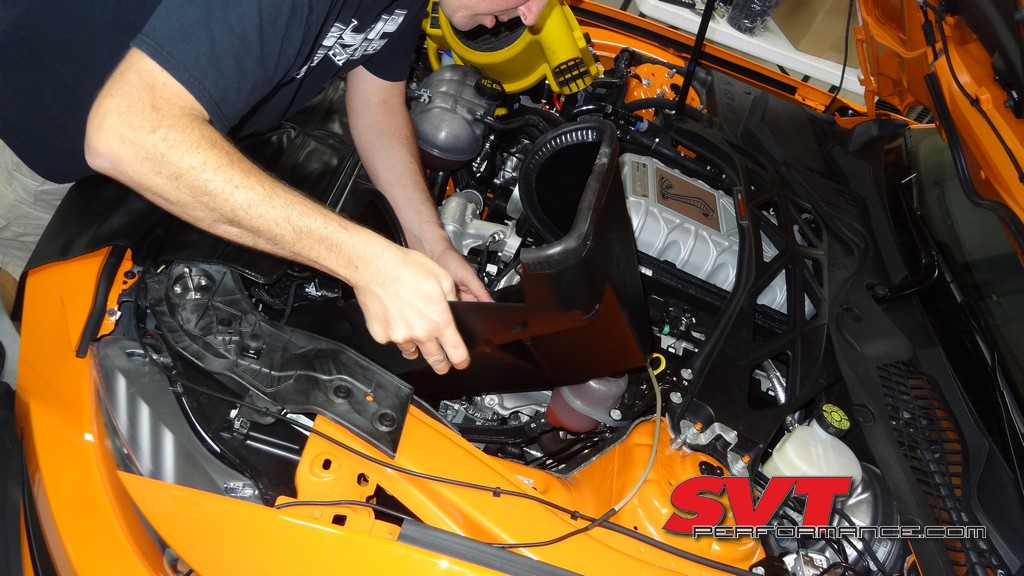 This JLT air box isn't GT500 specific. It fits, but the final version going to retail customers should fit much better. ​

What we have here is an ABS plastic printed prototype JLT intake tube for the 2020 GT500 Mustang. It shares some components, namely the heat shield/air box, with previous S550 Mustang kits; but there’s no guarantee that will be part of the final kit. We notice a couple small fitment issues with the box that we’re sure will be addressed before this part actually comes to market. At this point, the JLT crew had sent us a well shaped tapered intake tube and high-flow filter that fit surprisingly well. Not only that, but it performed really well too. 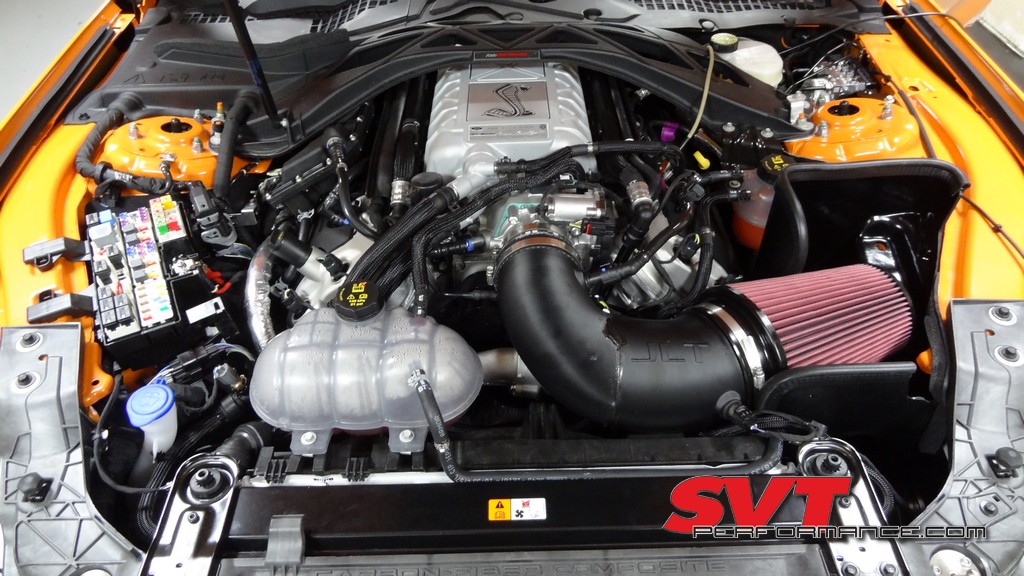 Got that classic JLT style. This a setup you'll find in the hundreds at an NMRA race.​

For a kit in such an early stage of development, JLT really knocked this one out of the park. The install was as simple as you would expect, and the performance gains really speak for themselves. Making absolutely no changes to the tune, we were able to pick up 63 RWHP. Take note how much higher into the rev range we were able to run without power starting to trail off. The stock intake was starting to run out of steam around 7,700RPM, but the JLT allowed the 5.2L Predator V8 to keep pulling past 8-Grand. If you were to add more boost to this equation the gains would be even more drastic. 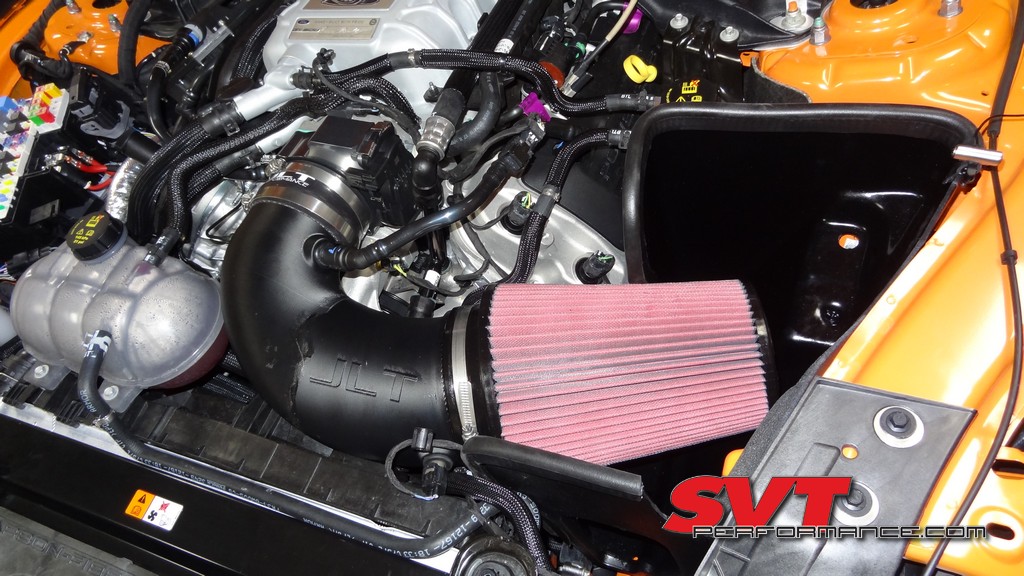 You can see the part line on the intake tube here. The two 3D printed sections are epoxied together, and are strong enough to run on the street or track.​

Just to try one more combination, we decided to bolt on the VMP Performance 105mm Throttle Body we had been playing with earlier. The results were basically within the margin of error. It appears that adding the TB picked us up ~6 RWHP, but for the most part it doesn’t seem to be needed at the stock boost level. That’s definitely the next step VMP will be taking with this car, along with some more extensive tuning. We’re waiting on HP-Tuners to add more features and define more parameters. These things take time, as greatness often does. 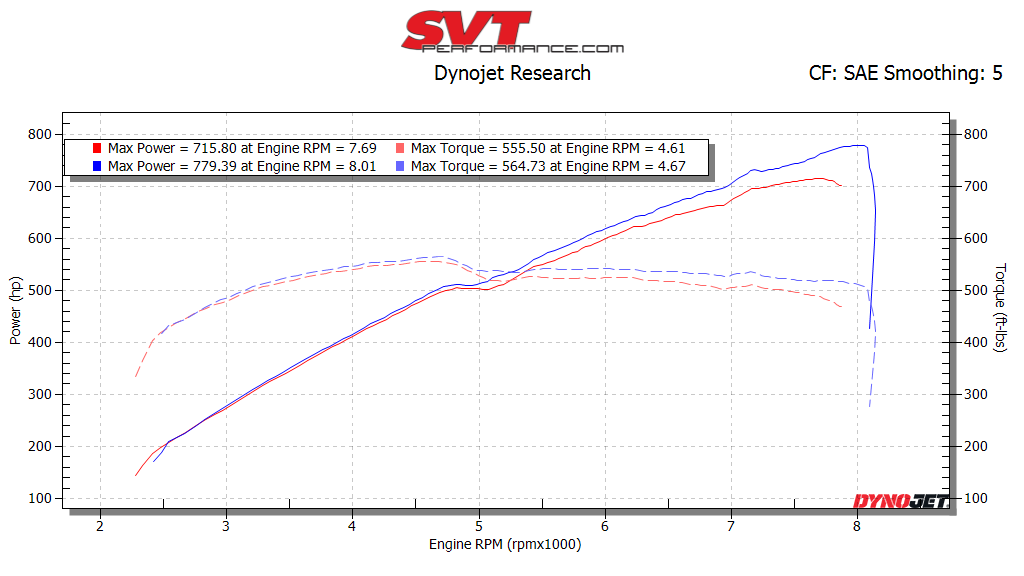 These are the gains versus the stock intake. The tune remained the same between all runs. Notice how the engine keeps pulling higher in the rev range with the JLT. 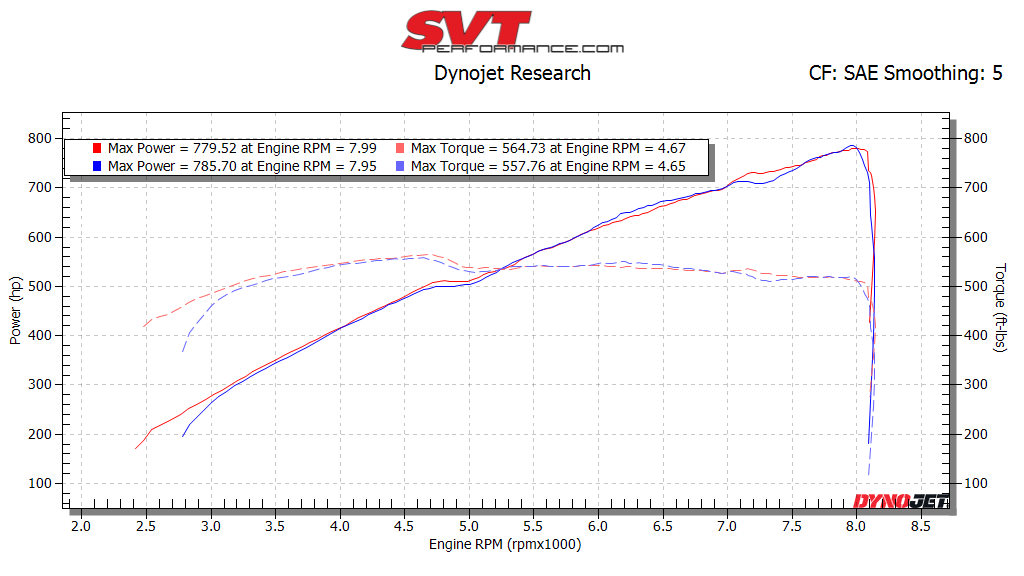 When we add the VMP 105mm Throttle Body to the mix we see a small gain. It's just not needed at the factory boost level. 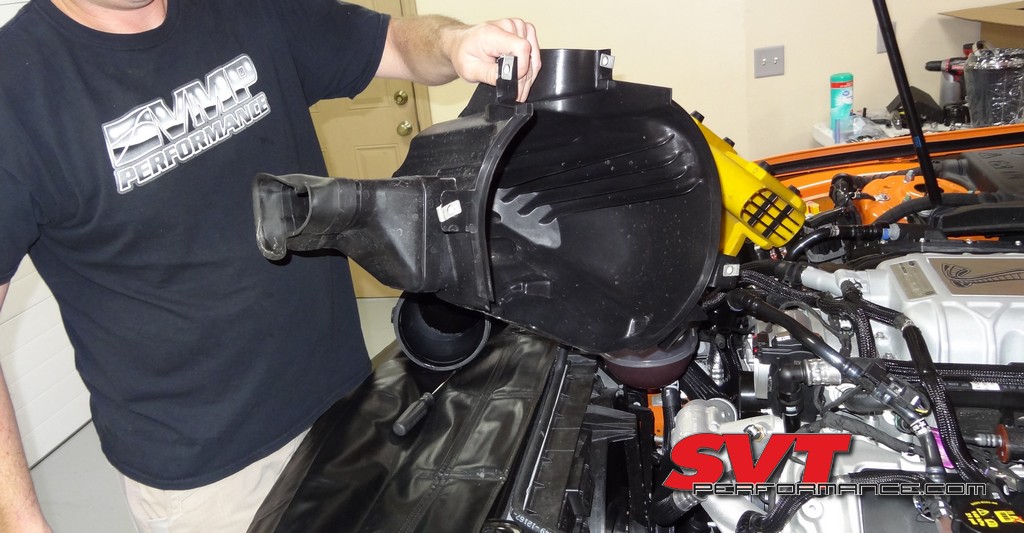 Here you can see how the factory air box routes air in from the grill opening. 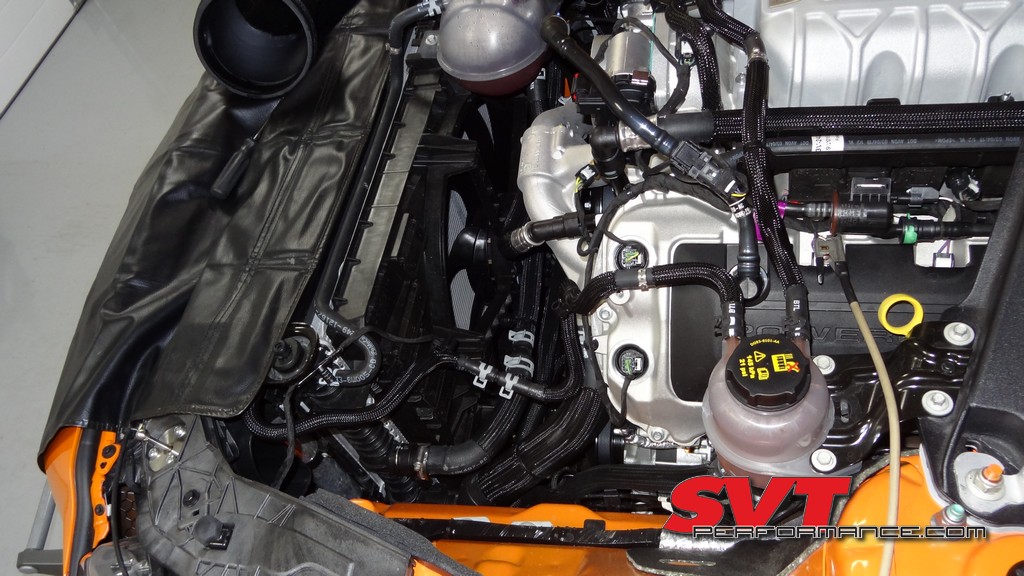 With the intake removed the aftermarket is left with a lot of real estate to work with. 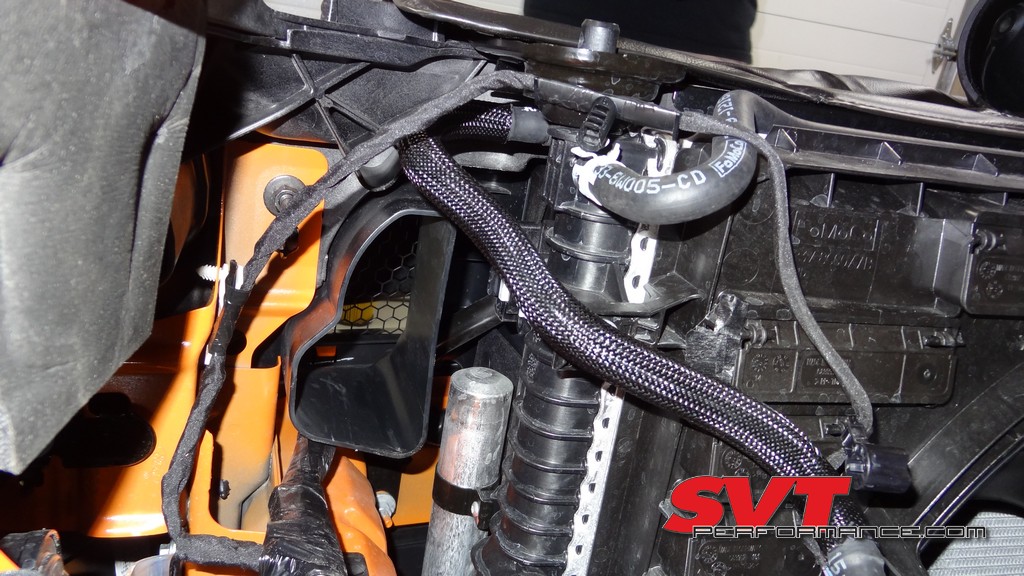 Here is where there are big power gains to be made. Whoever can best take advantage of the fresh air coming in from this grill will be able to put up some real world performance numbers. 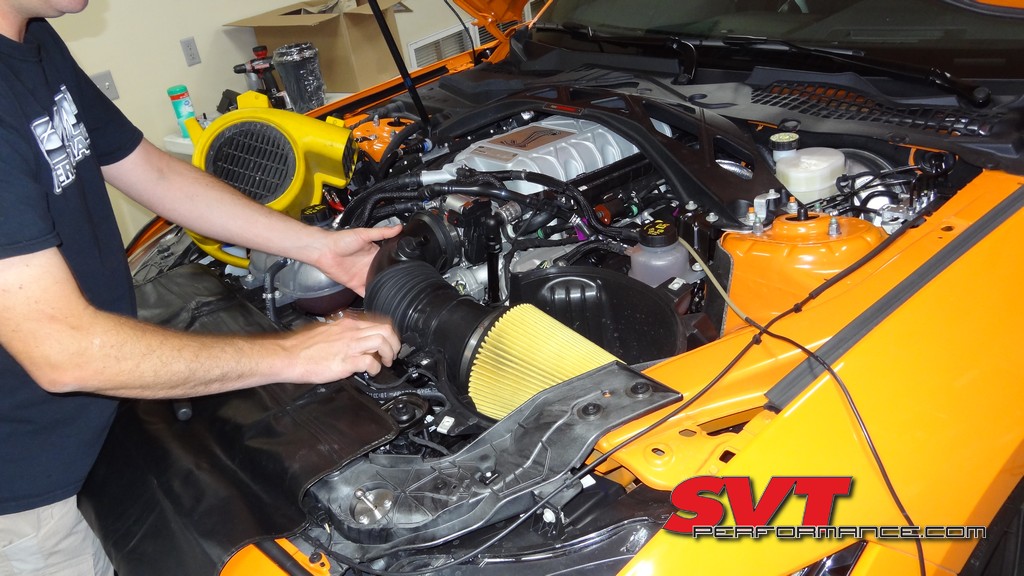 Gotta rip the stock stuff out. 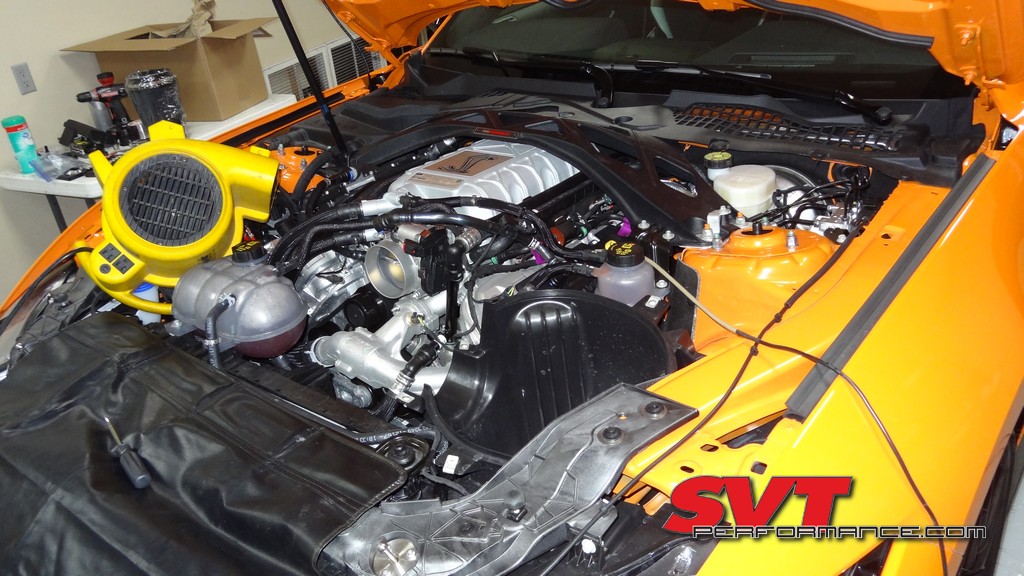 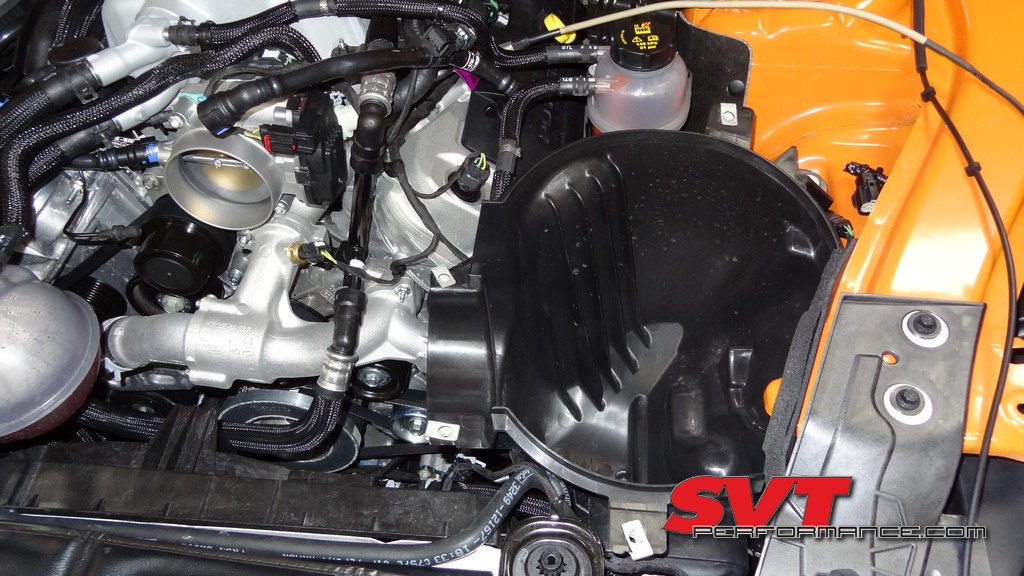 The stock intake box is a decently designed piece. 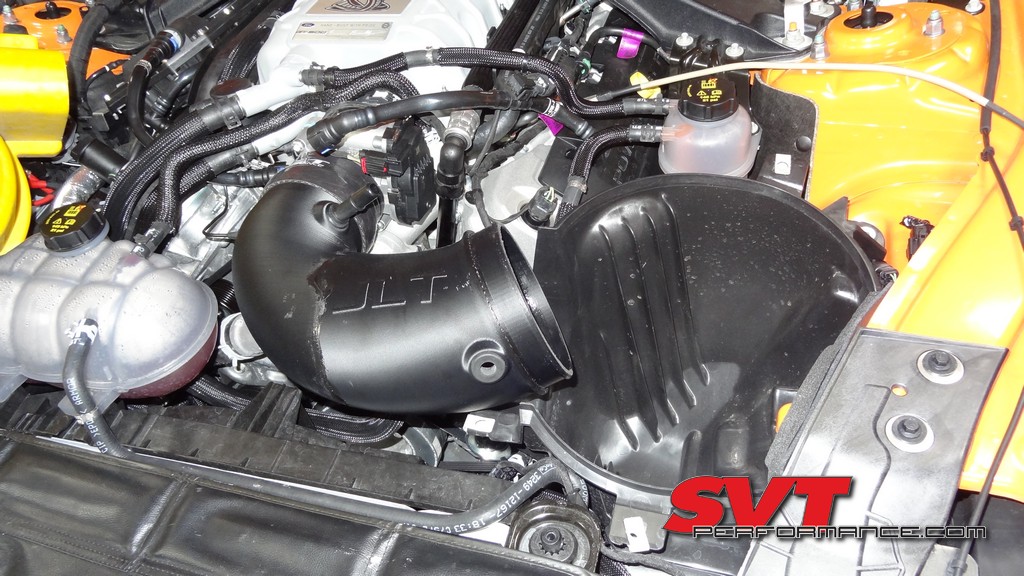 The JLT intake pipe is angled differently than the stock one. It allows JLT to run a larger than factory filter. 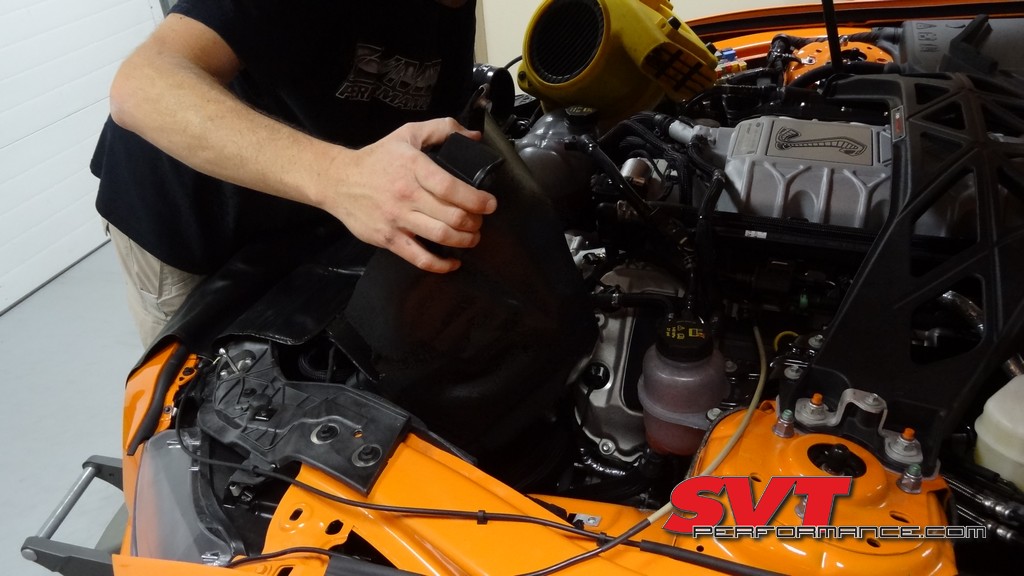 Takes a little wiggling to get the JLT intake box in place. 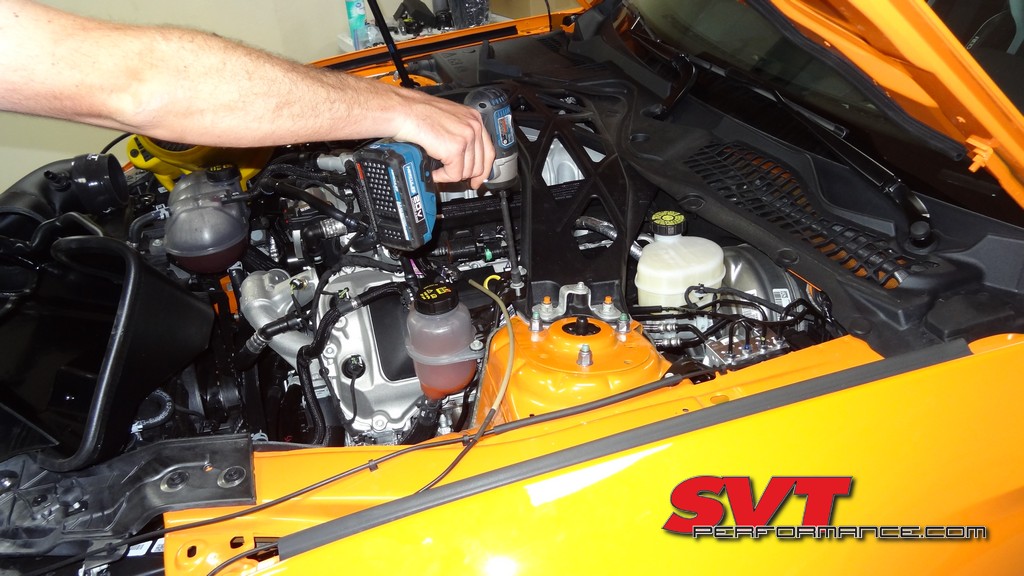 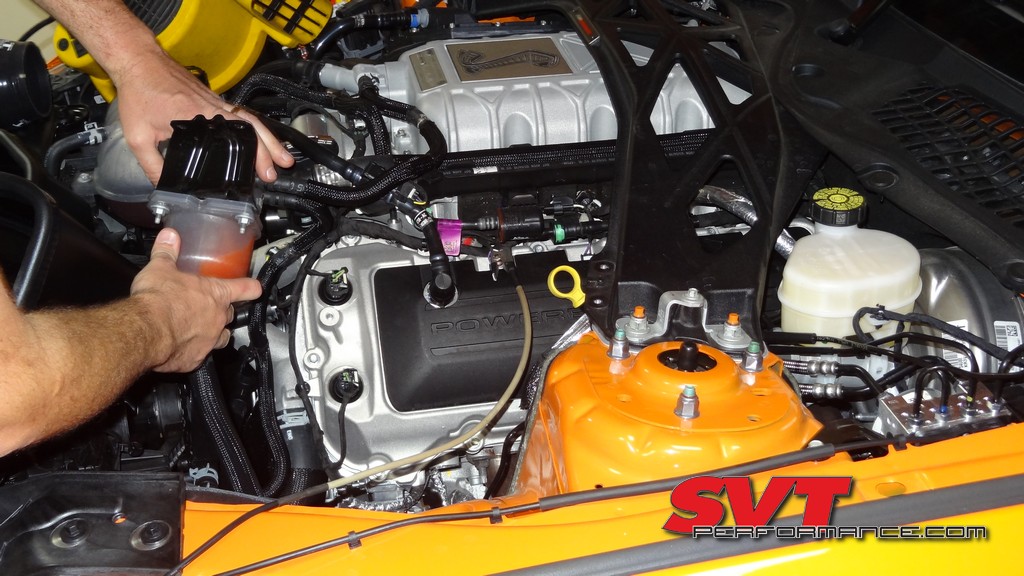 That allows you to pull it out of the way and slide the JLT air box in place. 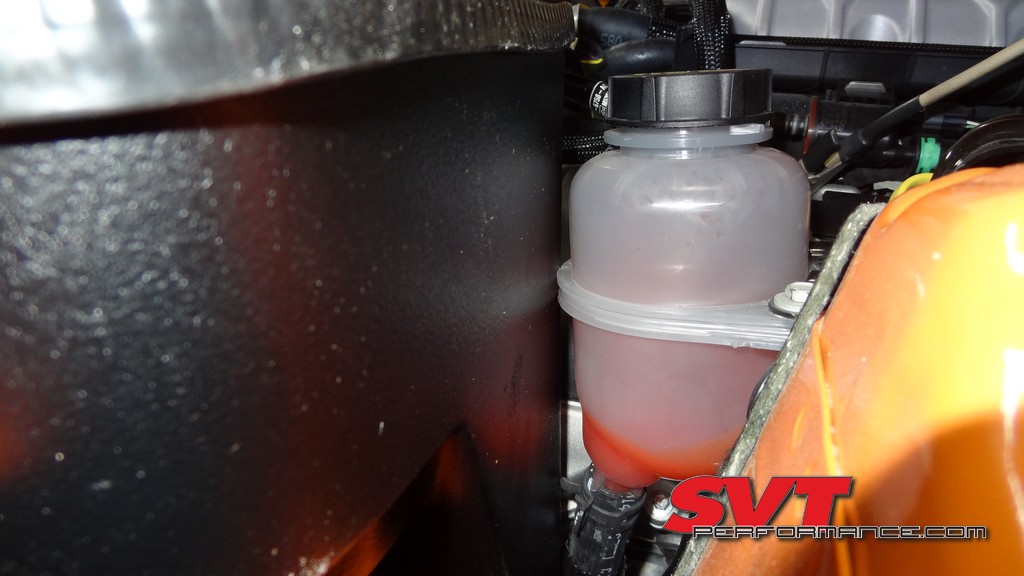 This is one area where JLT will be adjusting the final version of the kit for much better fitment.​
Last edited: Feb 21, 2020 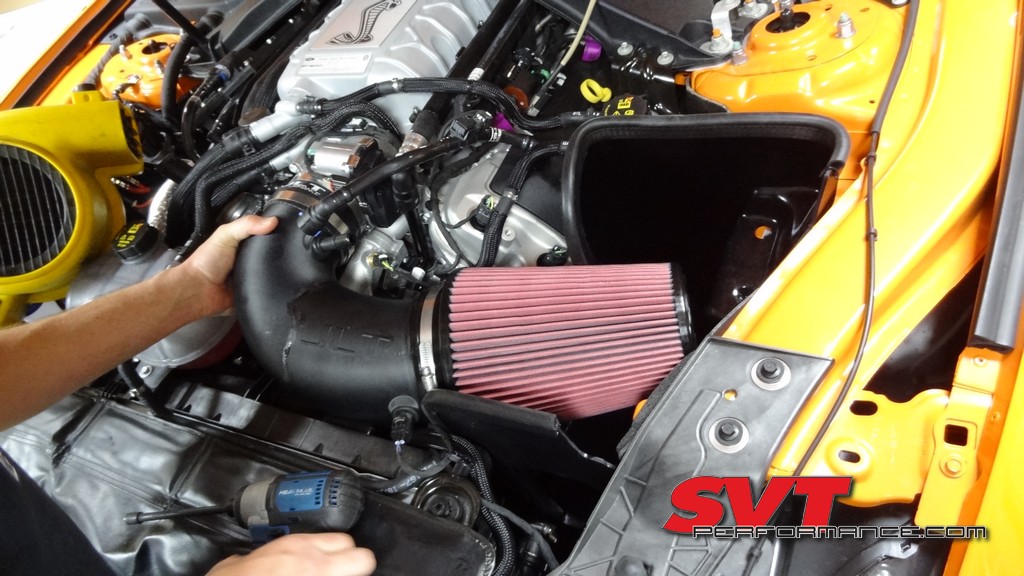 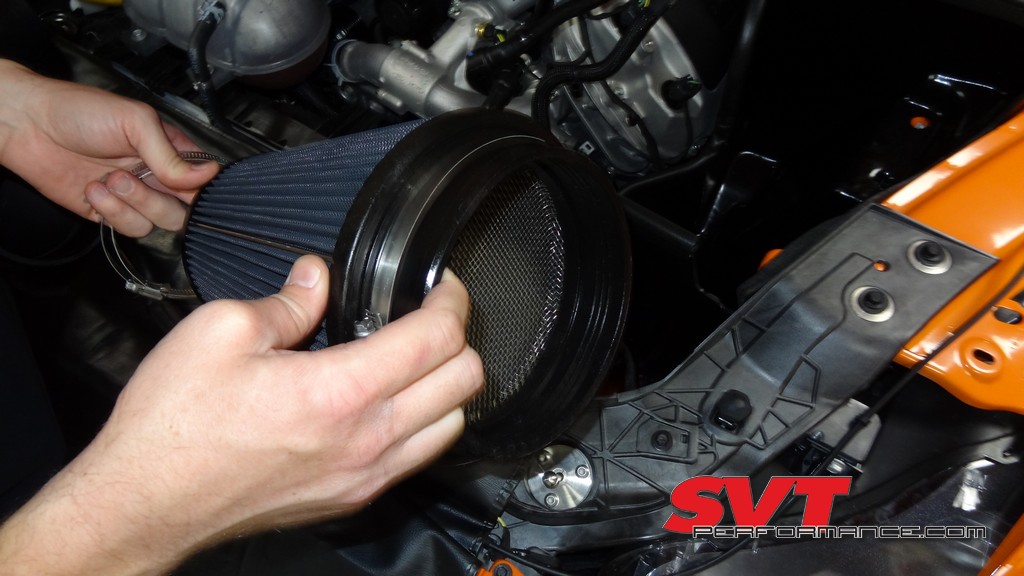 If you're interested, JLT has a race filter available. It is only metal mesh, not filter media. 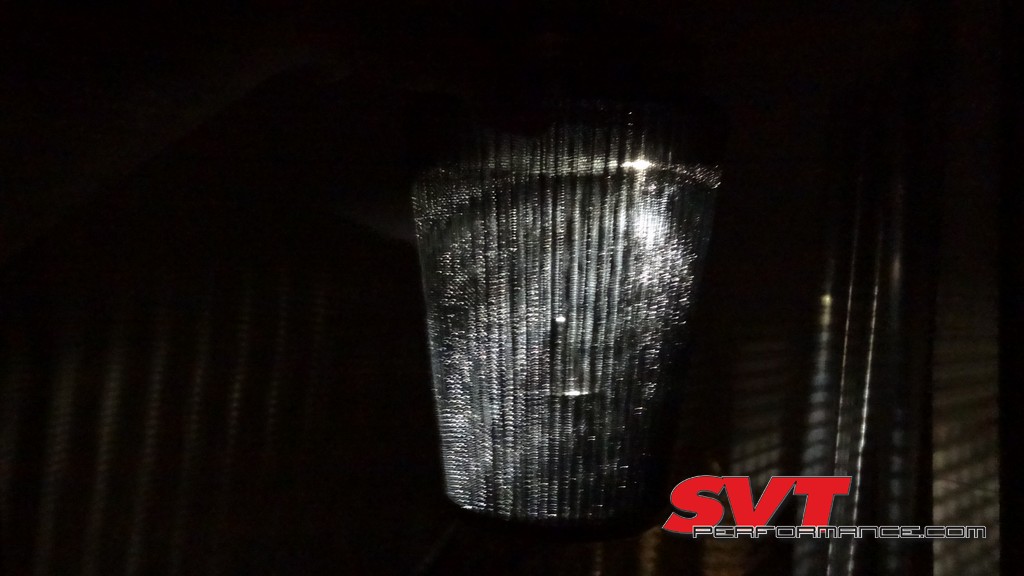 As you can see, this thing should flow pretty well. 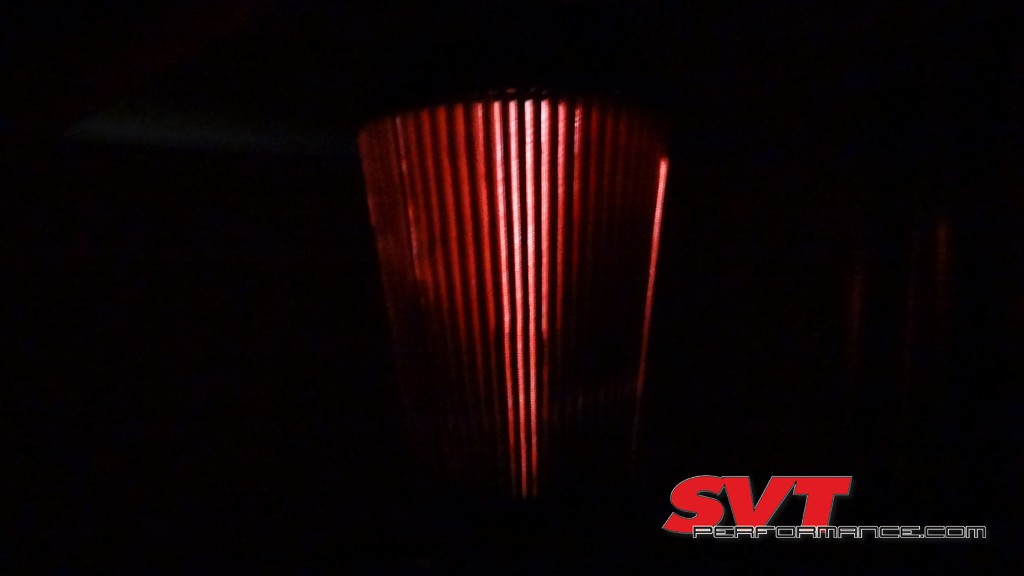 This is the standard filter for comparison. ​
Last edited: Feb 21, 2020
Super cool.... great results! Side note, i love the aluminum cam covers on the 500's haha.
I only had time to glance through this but I thought they also picked up 60something HP by taking the lid off the stock air box. Did I skim over something here?

DSG2003Mach1 said:
I only had time to glance through this but I thought they also picked up 60something HP by taking the lid off the stock air box. Did I skim over something here?
Click to expand...

Nope, you didn't.
Last edited: Feb 23, 2020
For those interested. This is the difference between running the stock intake lid off vs JLT. Neither has the 105mm TB and the hood was up. The JLT made more power pretty much everywhere above 4,000 RPM and the difference grew as you get higher into the RPM range. That's basically what you'd expect from increased air flow. 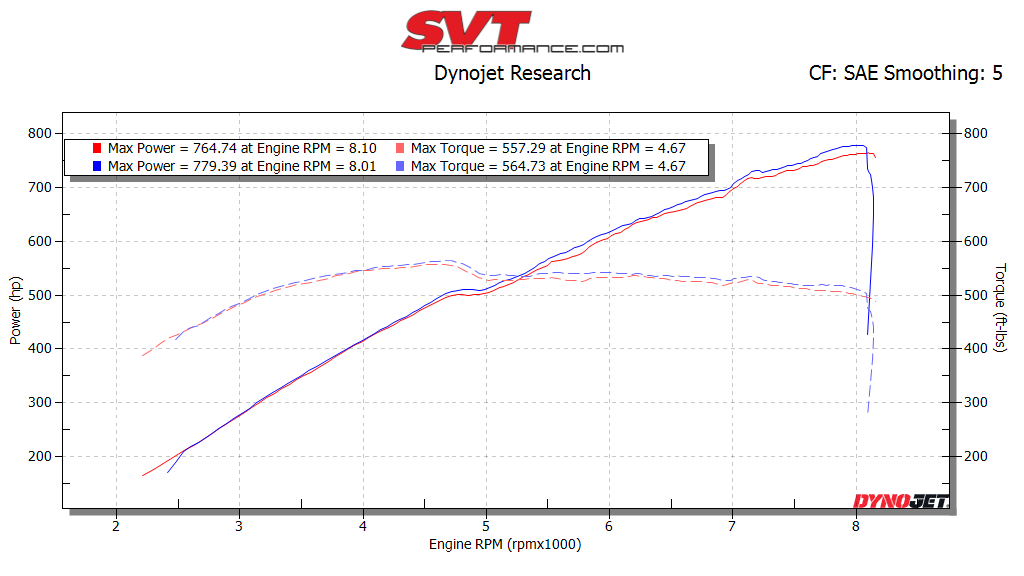 Last edited: Feb 22, 2020
I think if u simply remove the air filter cover u pick up like 60 hp or something. At least thats what I was told recently from a guy in Texas that has one. But I'm sure with a better CAI it would pick up even more.

GNBRETT said:
I think if u simply remove the air filter cover u pick up like 60 hp or something. At least thats what I was told recently from a guy in Texas that has one. But I'm sure with a better CAI it would pick up even more.
Click to expand...

Did you miss this:

When will we see some track results to back up the gains from the dyno?
Sounds like the good old days of pullied Cobras.
haha! maybe use the hood opening for something if possible. Put a humongous scoop on it or maybe even cut an opening into the fenders itself.
In my opinion, this is the reason those spy shots had the cut outs on the front quarters. They knew it was getting crazy gains out of less restriction.

me32 said:
When will we see some track results to back up the gains from the dyno?
Click to expand...

The vid is already posted in the article linked at the beginning of the article.


Sent from my iPhone using the svtperformance.com mobile app
Man gone are the days of the square dyno results! Hp is impressive, but wheres the beef?
So take it to the drags to see if it performs.

UBNZO6D said:
So take it to the drags to see if it performs.
Click to expand...

Next weekend, or soon thereafter.