So I had the dreaded crunch while shifting into 5th gear about two weeks ago, I vigorously searched the forums for help....While I am mechanically inclined (ASE certifications) I didn't want to take on the task of breaking down the transmission and rebuilding the 5th gear synchronizer. So I called 6 shops in the San Antonio/ New Braunfels Texas area and no one (Except one person and I don't want to put his name out there but he is unreliable and not easy to get in touch with and also wanted $650 just for labor) to rebuild this shitbox transmission, So I took on the task and pulled the transmission out and started pulling it apart. Its a fairly simple noncomplex transmission. The only tools I bought to speed up the teardown was a bearing puller and a longer 2 Jaw puller(17 ton) to get everything apart. I also modified a wrench to get the detents out, other than that just basic hand tools. As far as the car goes its HEAVILY modified it was supercharged but I decided to pull the blower and go N/A, the motor is built bottom and top end (Rods/Pistons/Non Sleeved/Ported Heads/Valves/Springs/Cams Stage 2/Accel coil packs/BBk 90MM/JLT CAI. The car makes 528HP naturally aspirated, that's with a built engine bottom to top. The clutch was upgraded to a Mcleod RST 1200HP twin ceramic disc, and also a braided line and MGW shifter. My plans for the transmission are to upgrade several parts including the Input shaft, bronze shift fork pads, carbon synchros, heavy duty synchro cone, new 5th gear. parts were ordered from TX distributing and AMP, modifications will be welding the shift forks, painting the case, and some other modifications that are similar to what ben calimer does for better shifting that a transmission builder in the local area suggested (for higher RPM shifting and the clutch lockout problems). I will post pictures up shortly so stay tuned, also if anyone in the area has trans problems Im going to start rebuilding these. I have a lift and a shop, just contact me for more info. Hopefully I can help some people out, these are expensive to replace and parts are not cheap either for a Chinese built transmission.

I’ll upload photos soon. I keep getting error messages...As usual, and show you guys the failure of the synchro.

Lots of pics please. Have wondered if I could do the stage 3 AMP upgrade to mine as well.

Below is the weak shift forks, I’ll get more pictures of the welds. But at a glance you can see why they break! Second picture is the full rotating assembly removed from the case, as I stated it’s a simple unit. 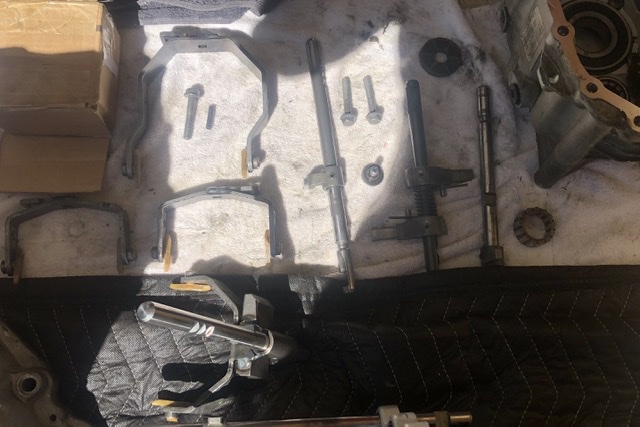 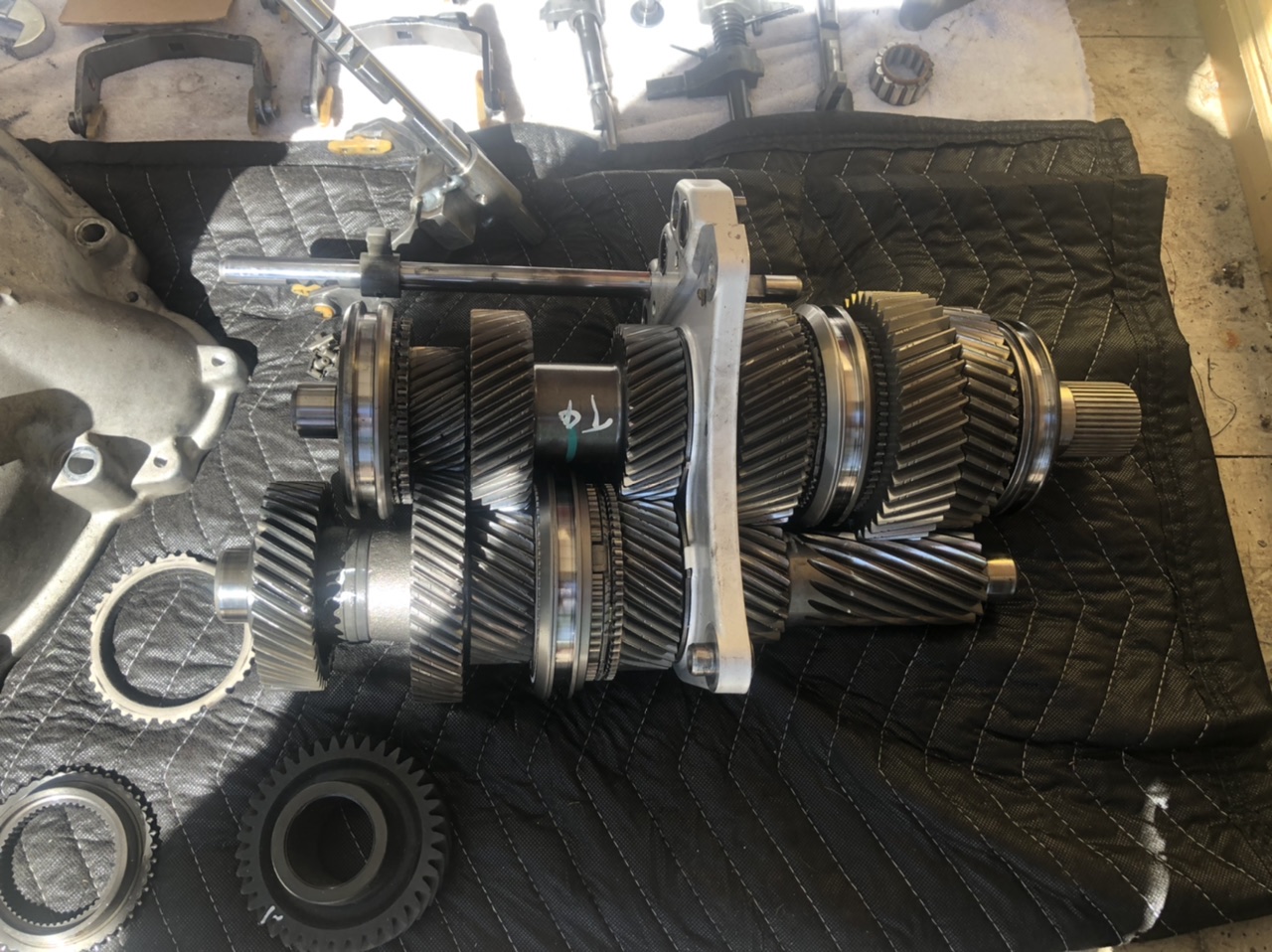 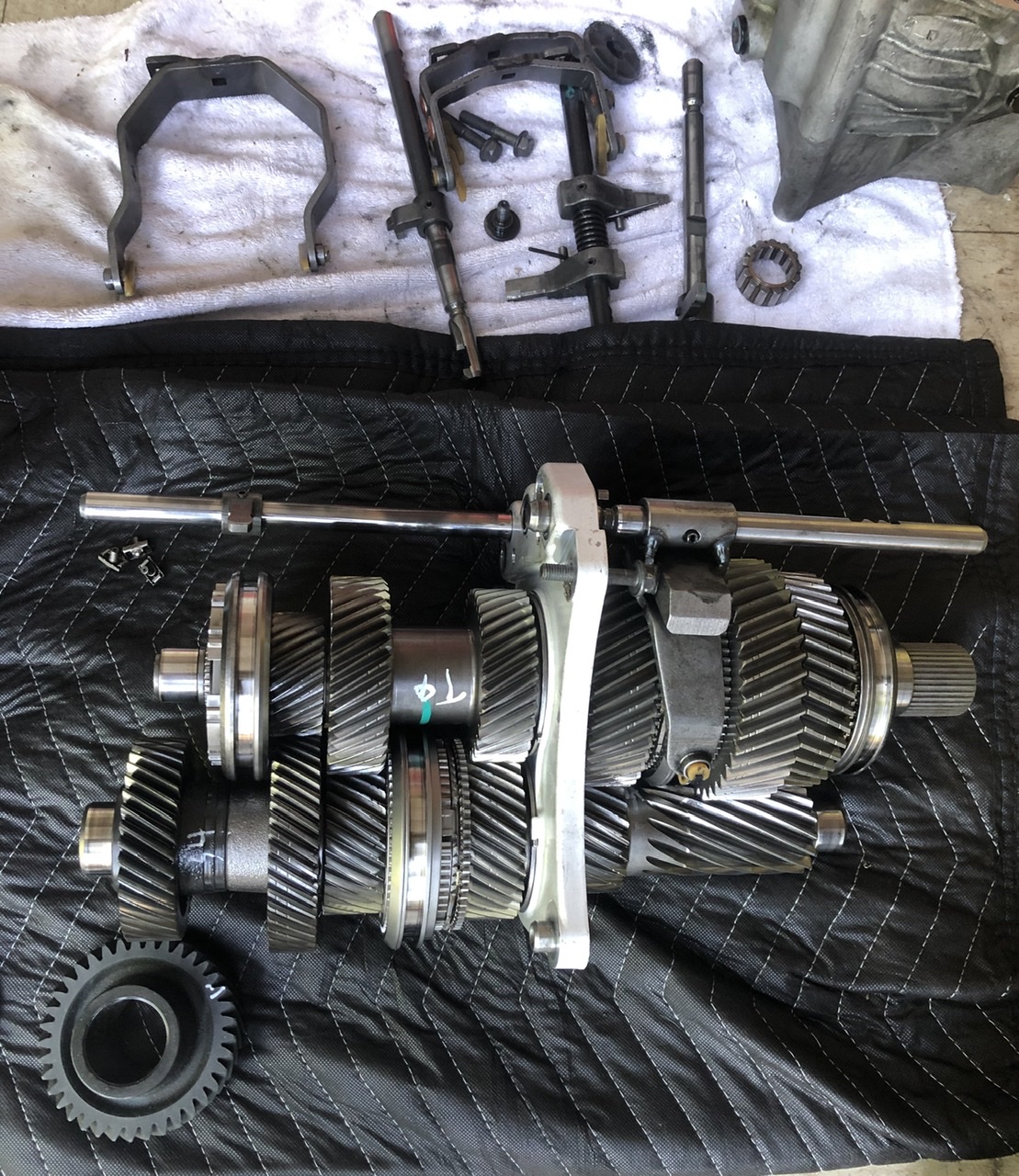 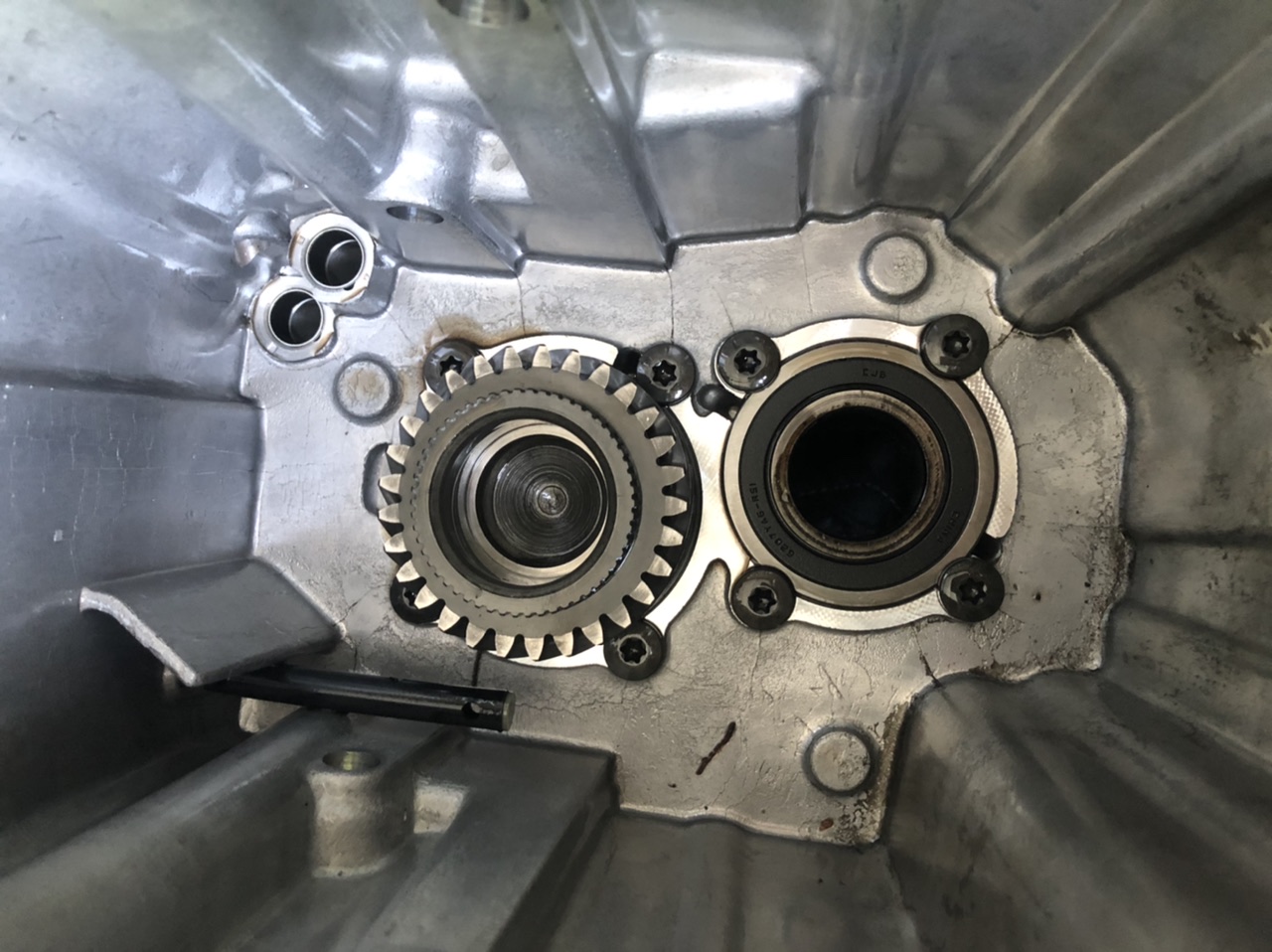 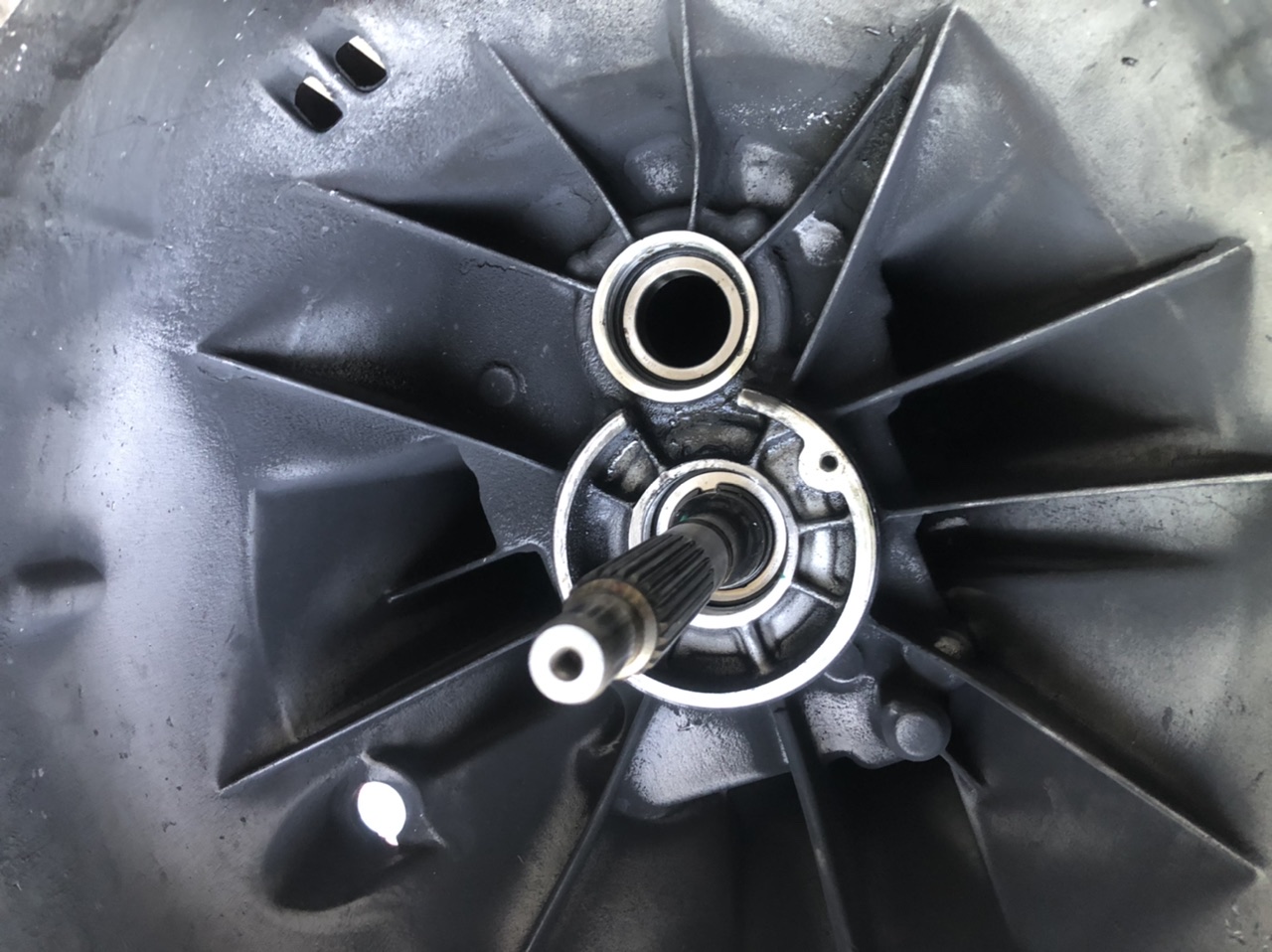 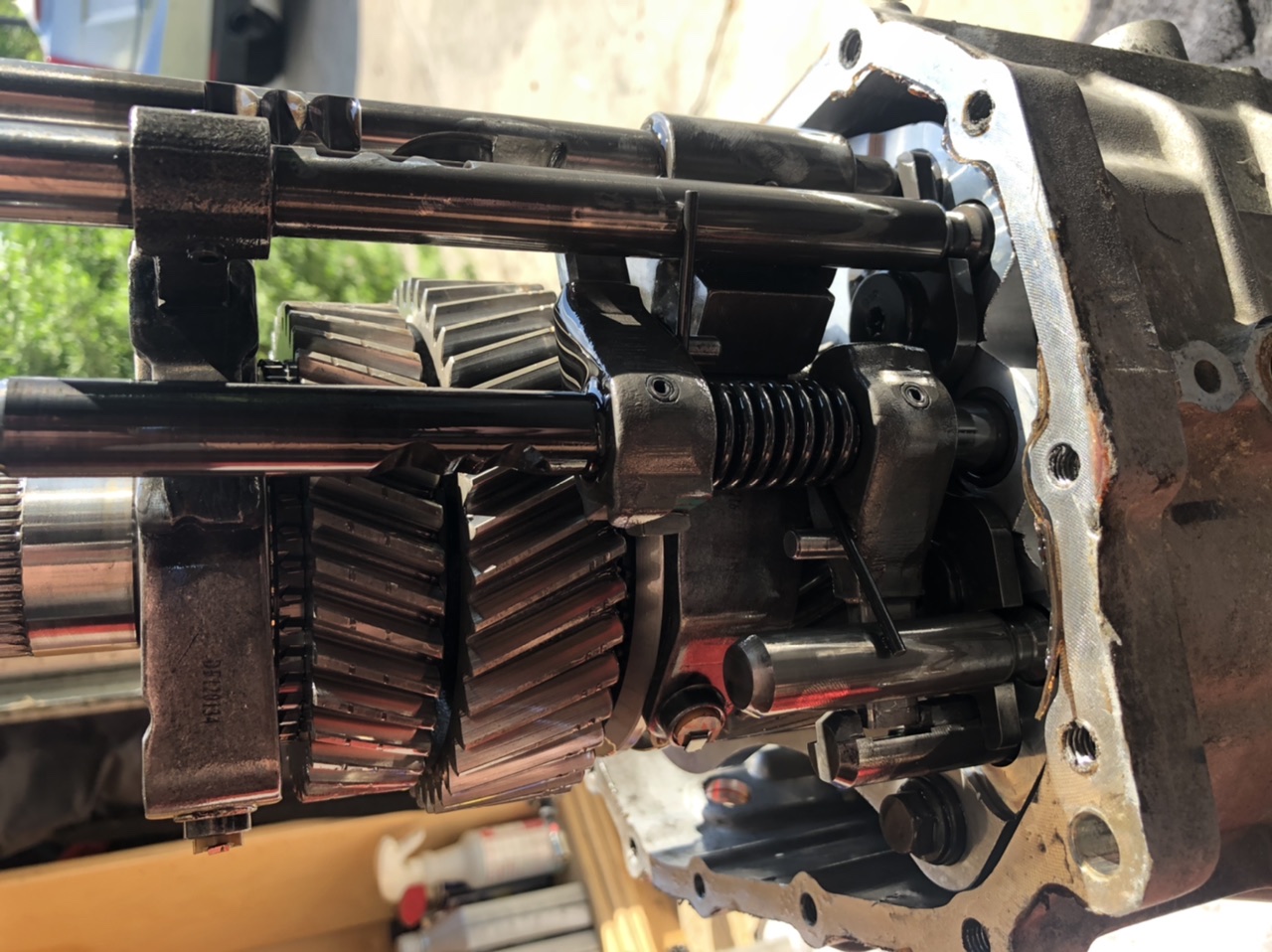 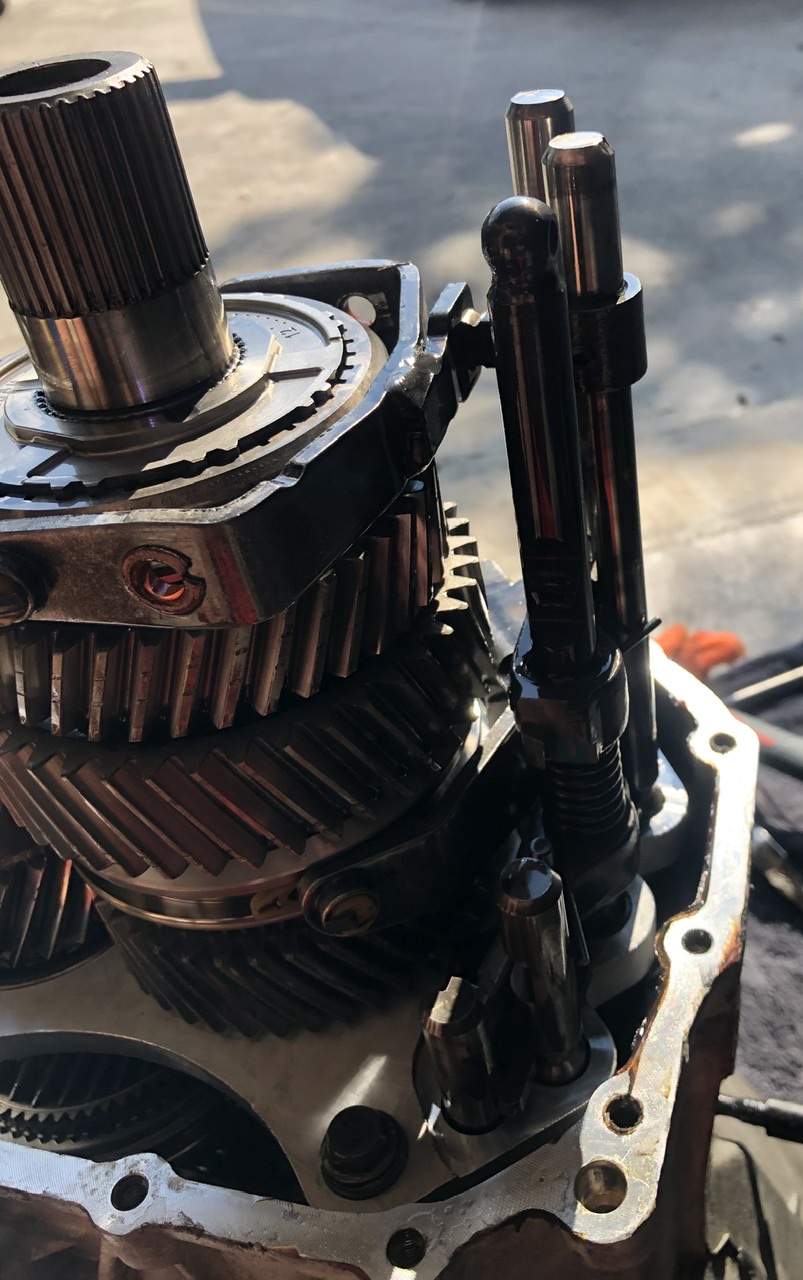 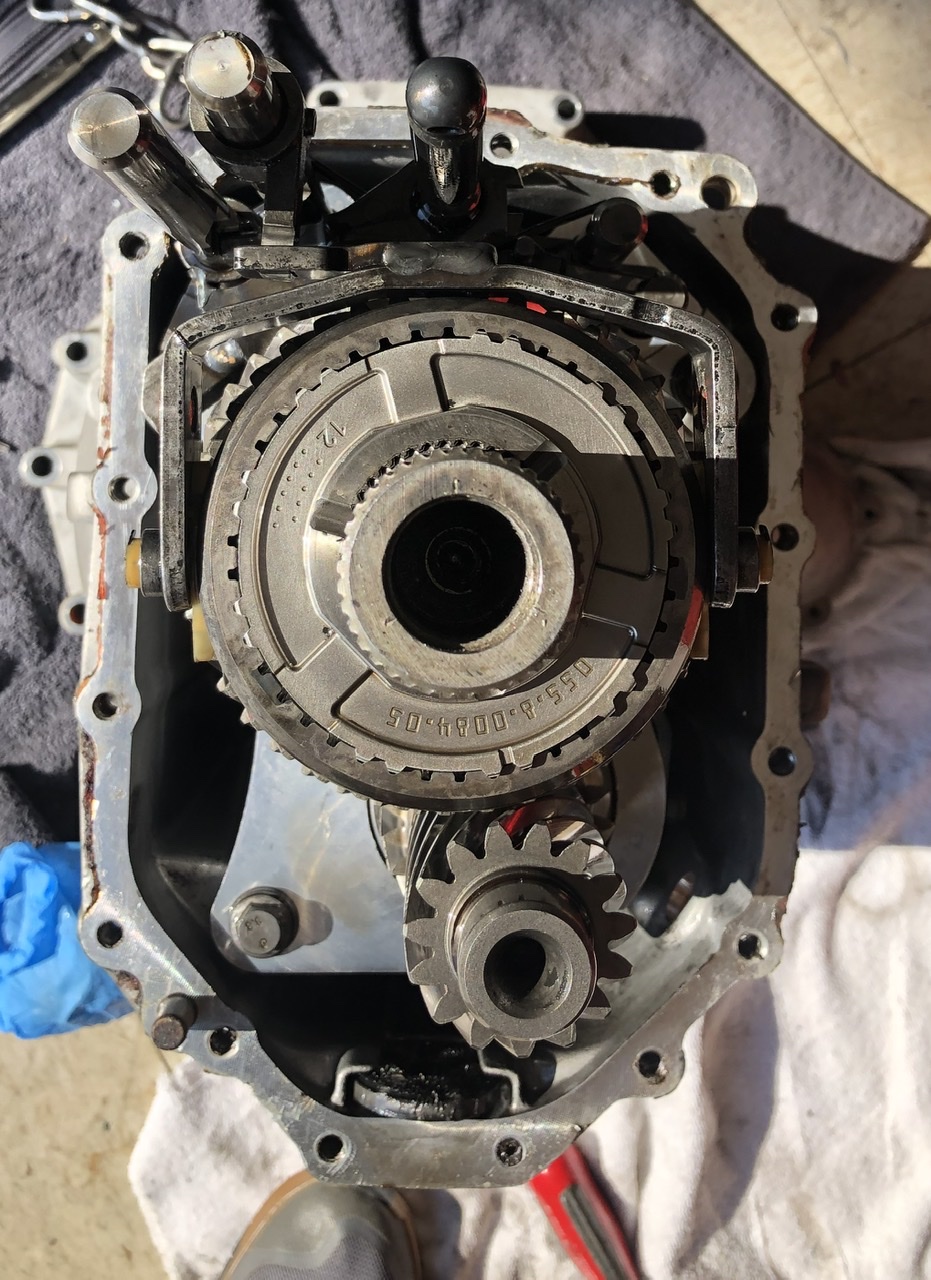 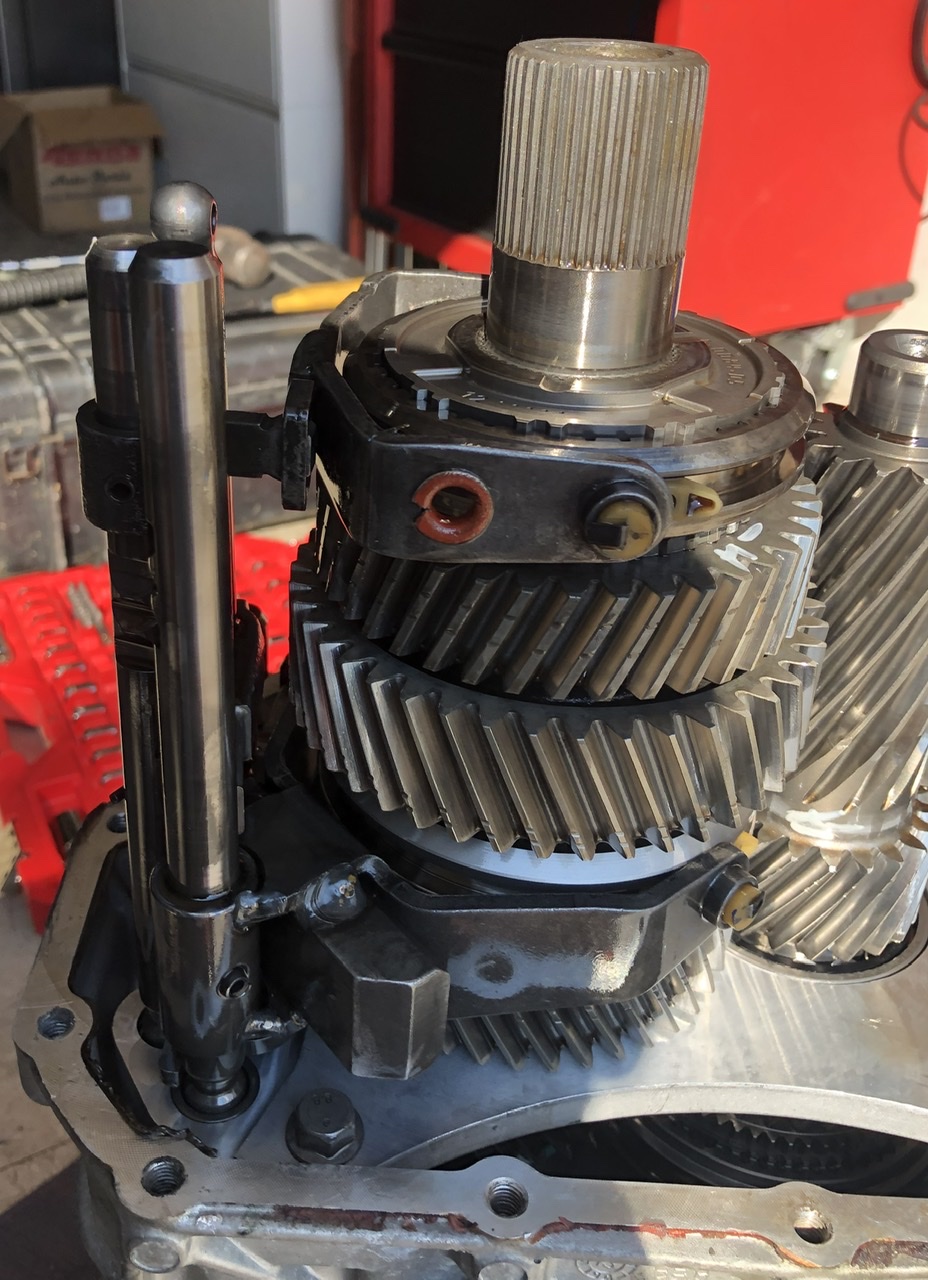 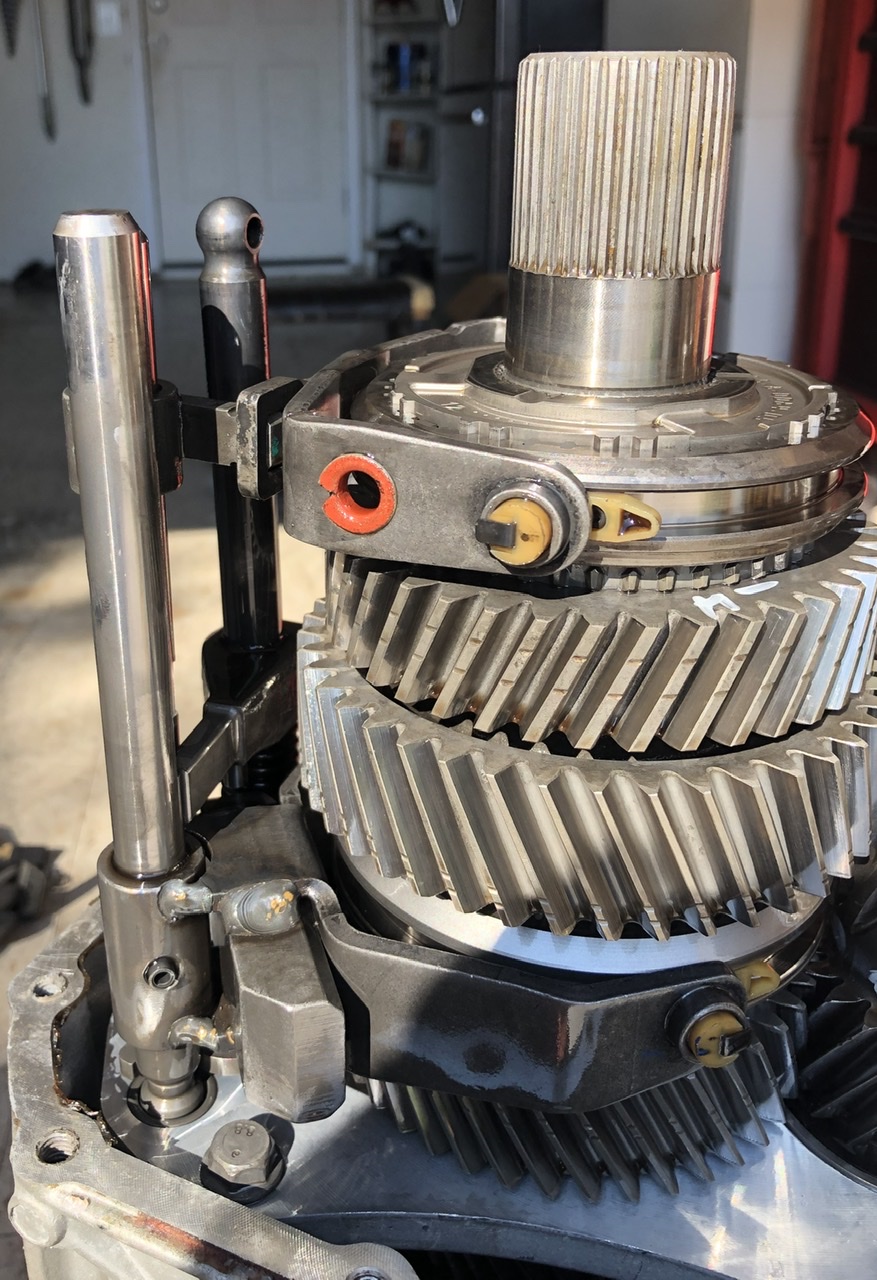 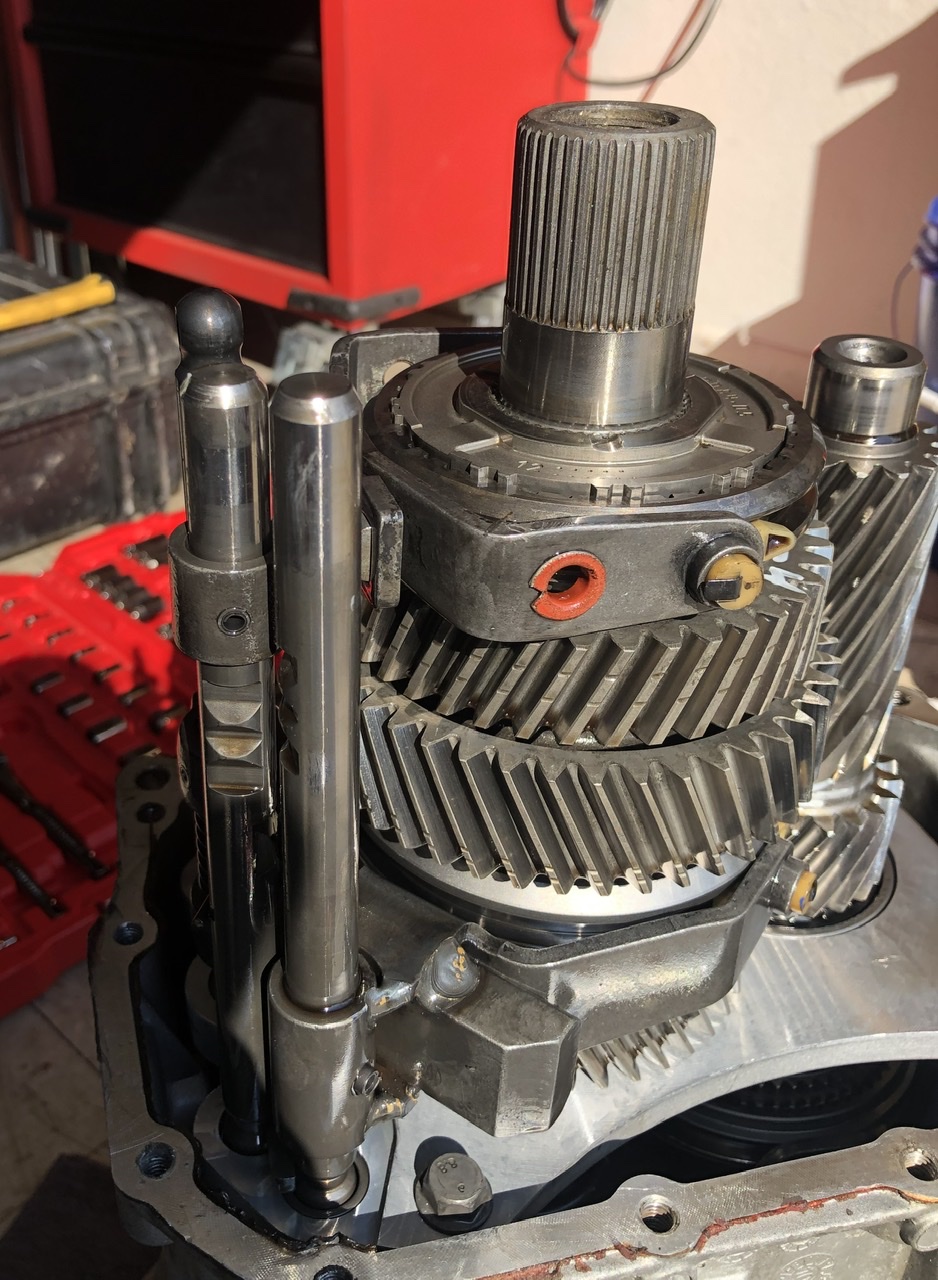 I’ll get some pictures of the back case today. This last picture is of the failure in the synchro cone, the teeth are grinded down slightly. If you zoom in you might’ve able to see. 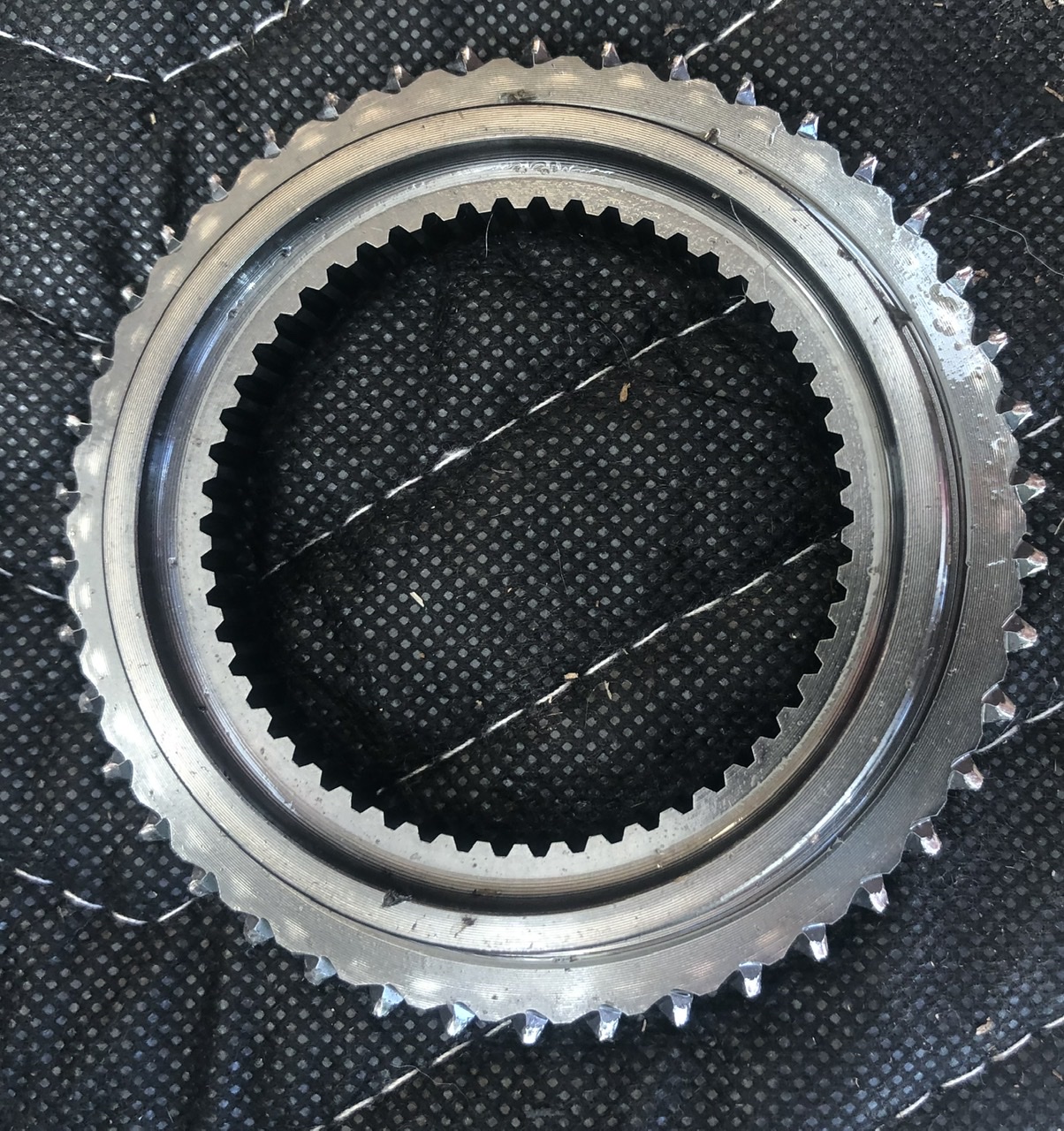 @Reaper14.....Definitely a tough job, but if you have a good mechanical mindset you can get it done!

Had some time to work on the trans this weekend, pressed out 5th gear, bearings and removed the 5/6th synchro. So pressing the gear out was the most challenging. Had to use a 25 Ton press and ended up piping loose after heating with a Saleen torch and 35,000 LBS of pressure! My father in law was in shock that it took that much but it popped lose! So just waiting on parts from AMP now, then I’ll start the rebuild.

I want to post a separate picture of this little gem, I didn’t want to replace it initially because I had already installed the brass fitting. But I was at the dealership and it’s fairly cheap to replace....Now the interesting thing is when I took the shift stop detent with me to the ford dealer I got into a HUGE altercation with the parts manager over this part. He said that it didn’t come out of a MT82, I showed him my picture and he still called me a lier...Well **** you Ford. He claimed the shinny detent with the machined cap came in ALL MT82 trans from 11-18....That’s a straight lie. So I can see why they are getting sued. And it’s the same part number there is no superseded part number, good coverup Ford! 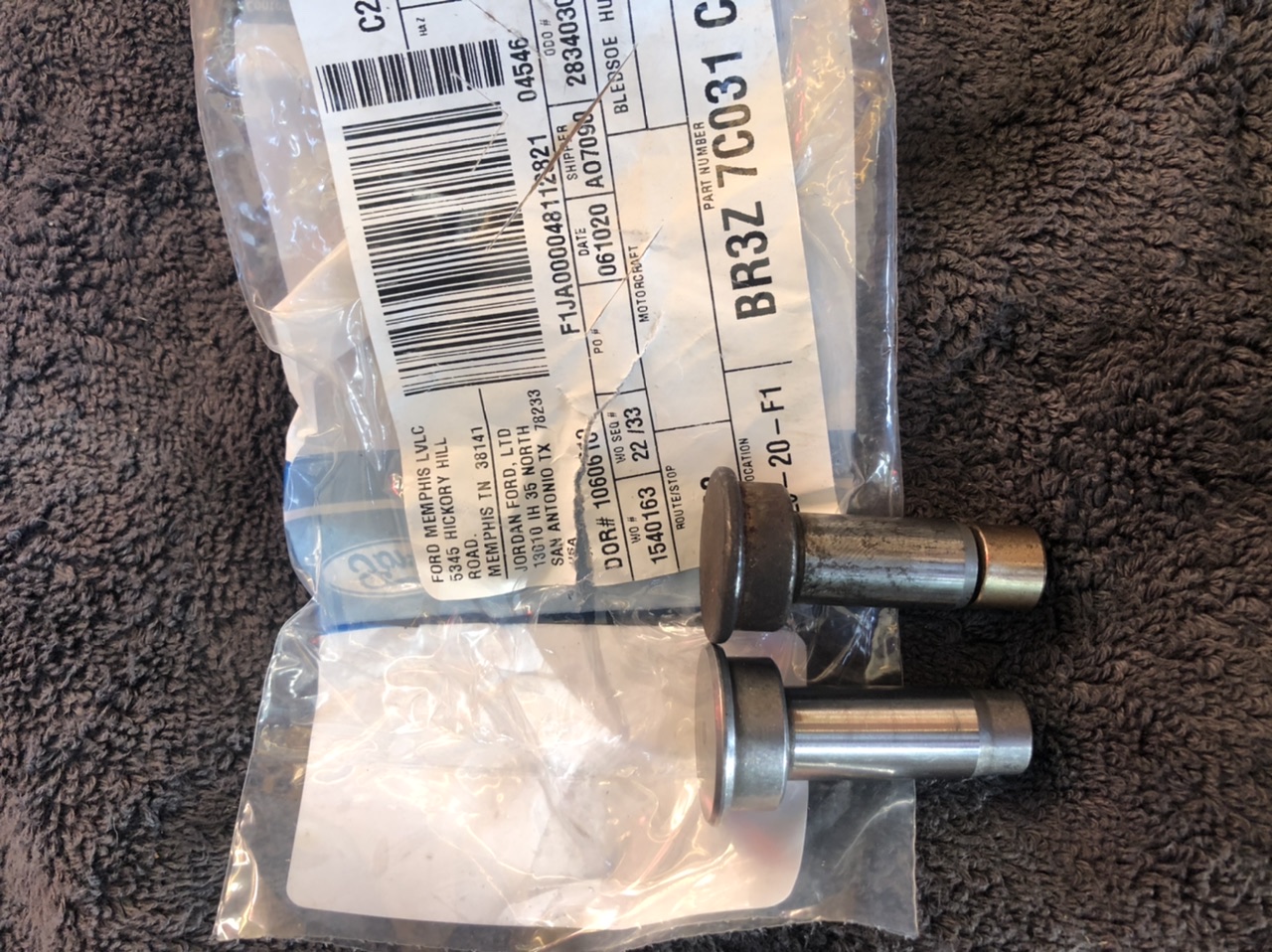 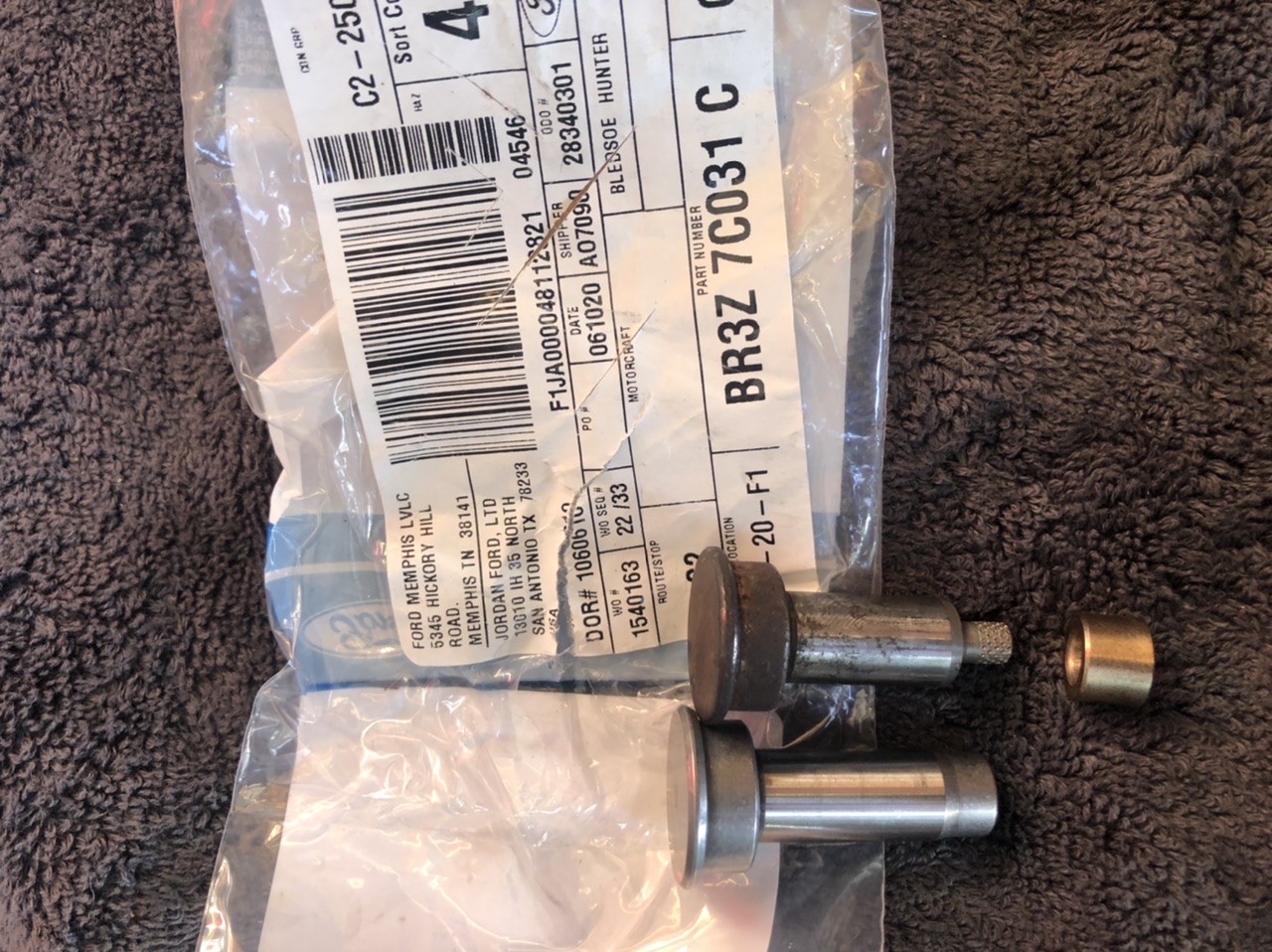 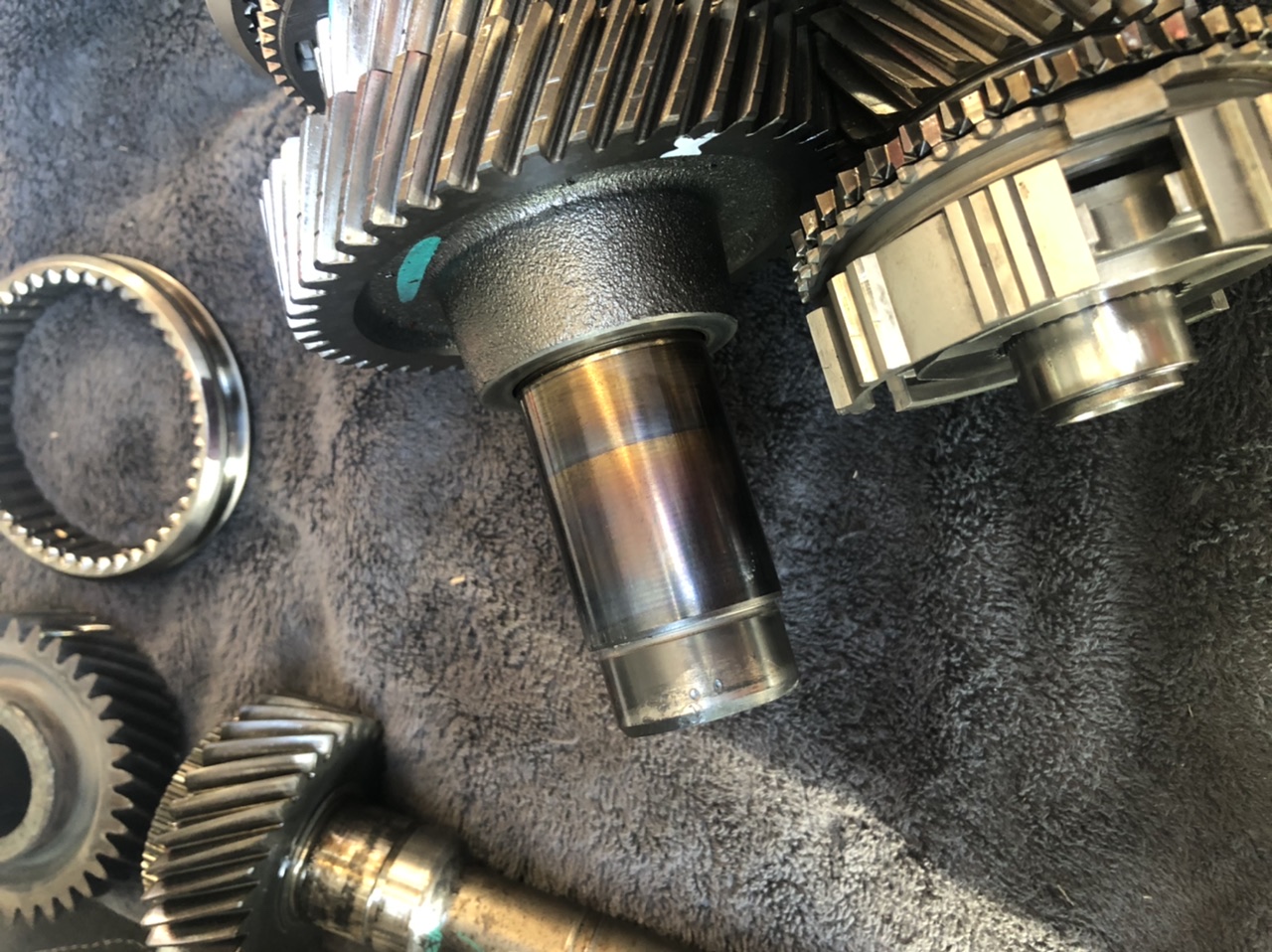 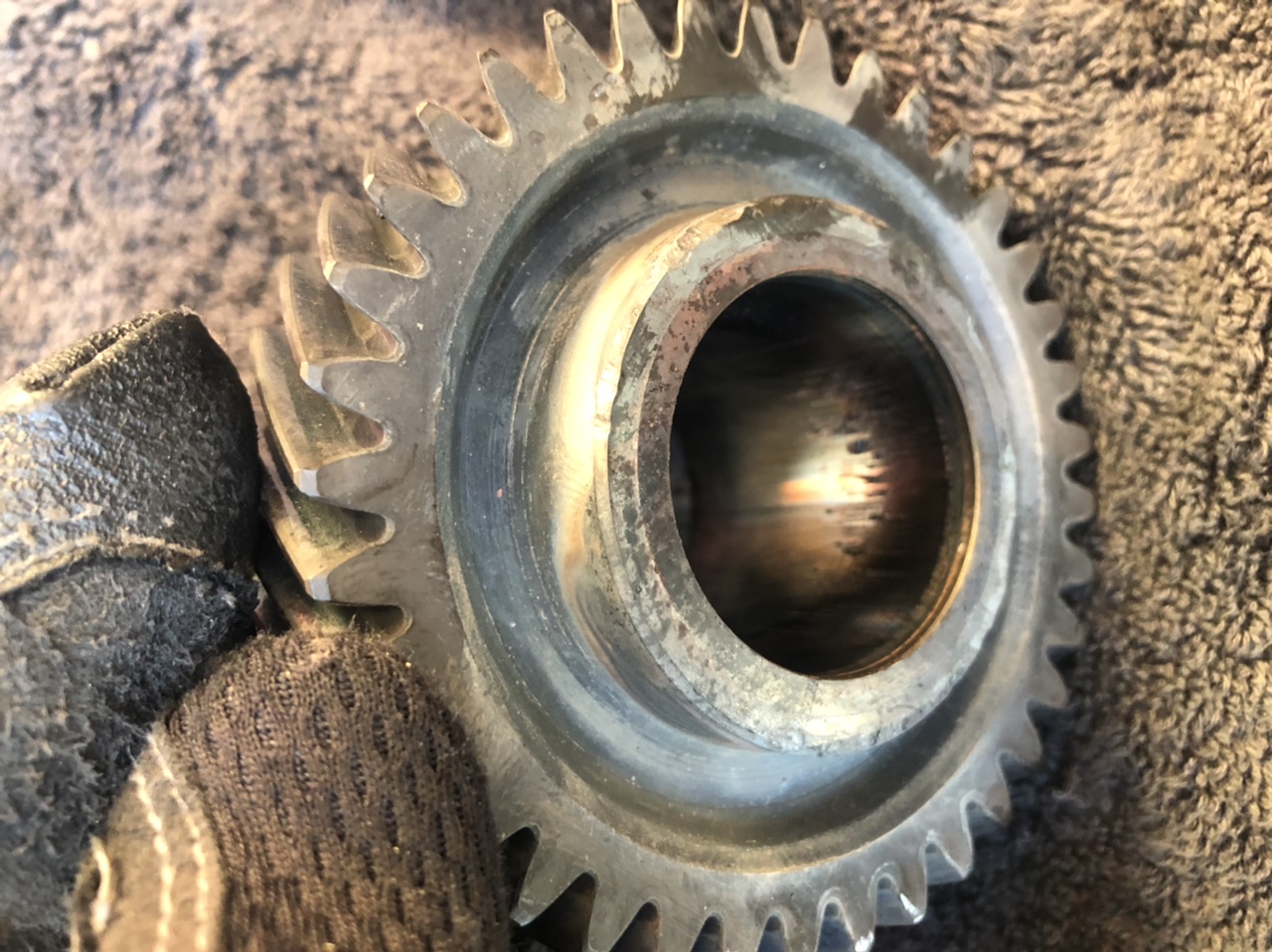 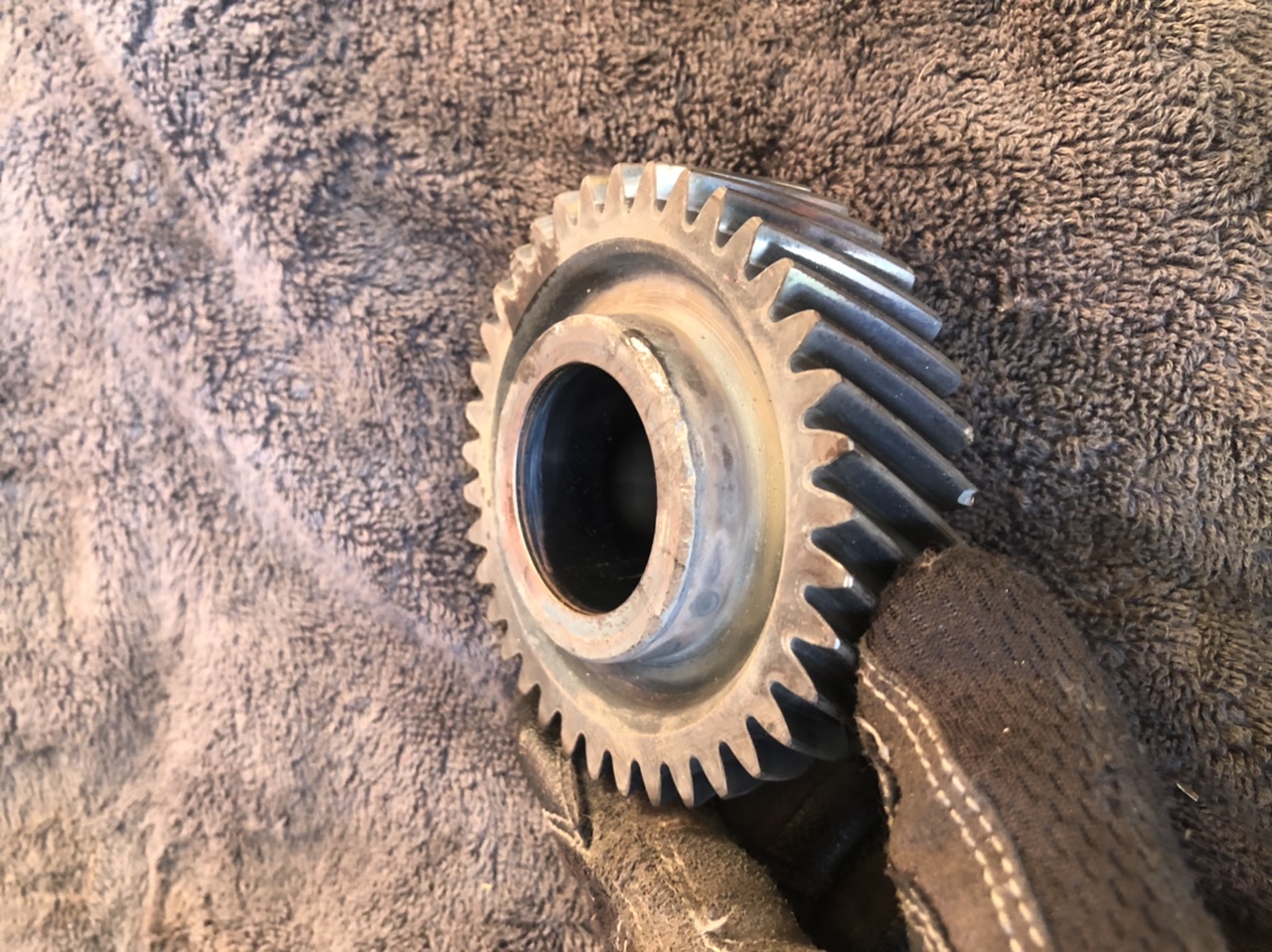 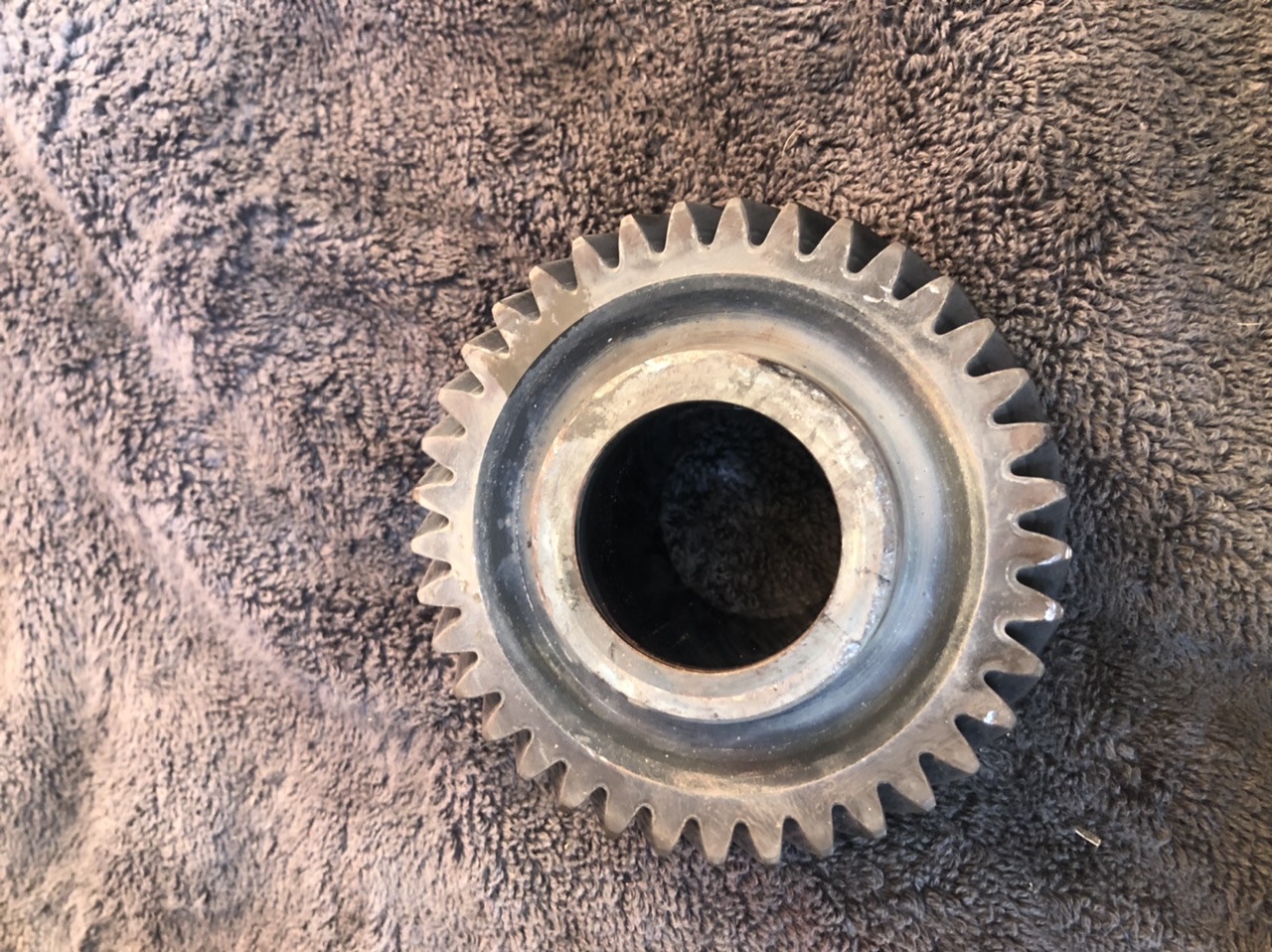 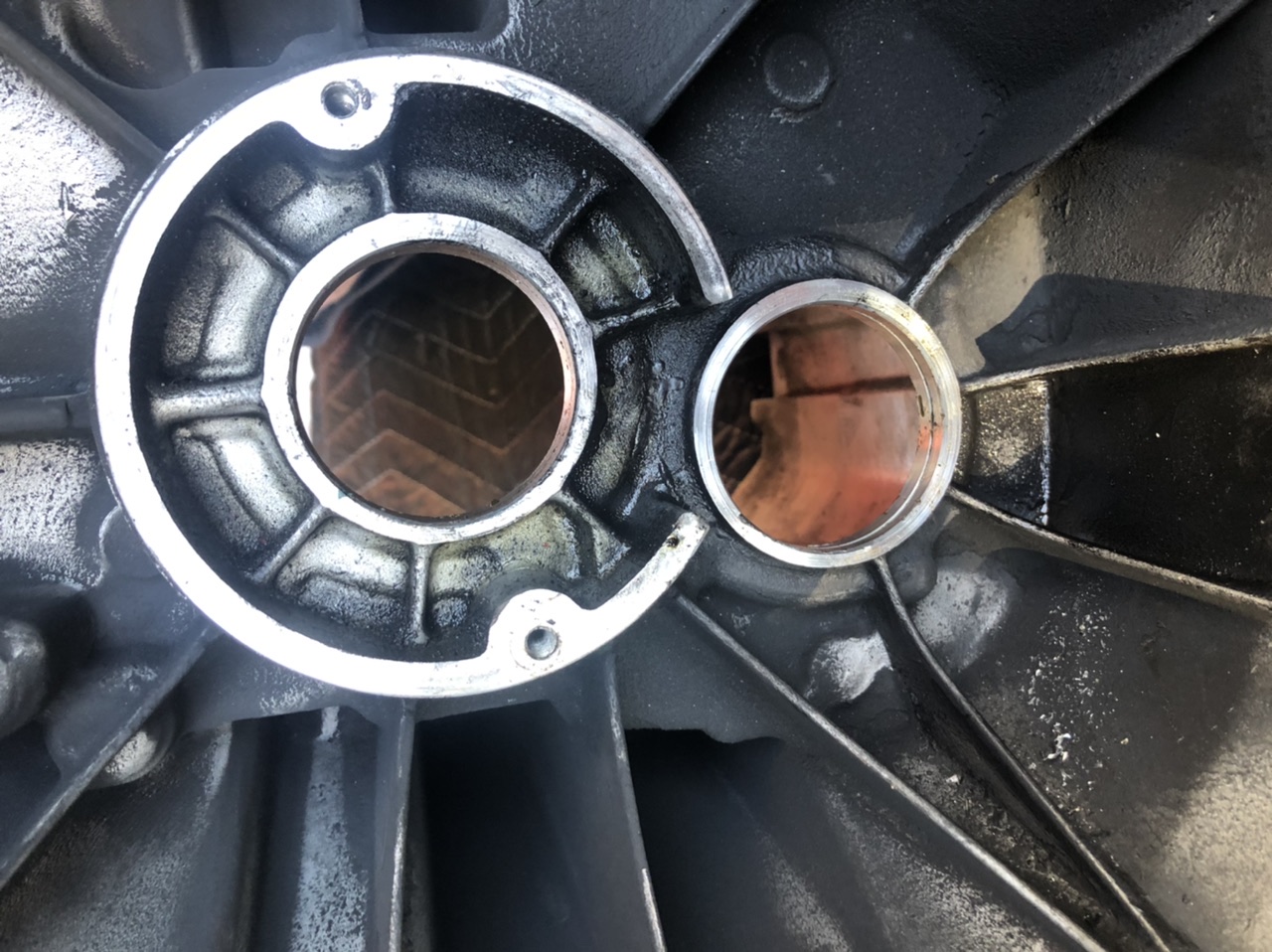 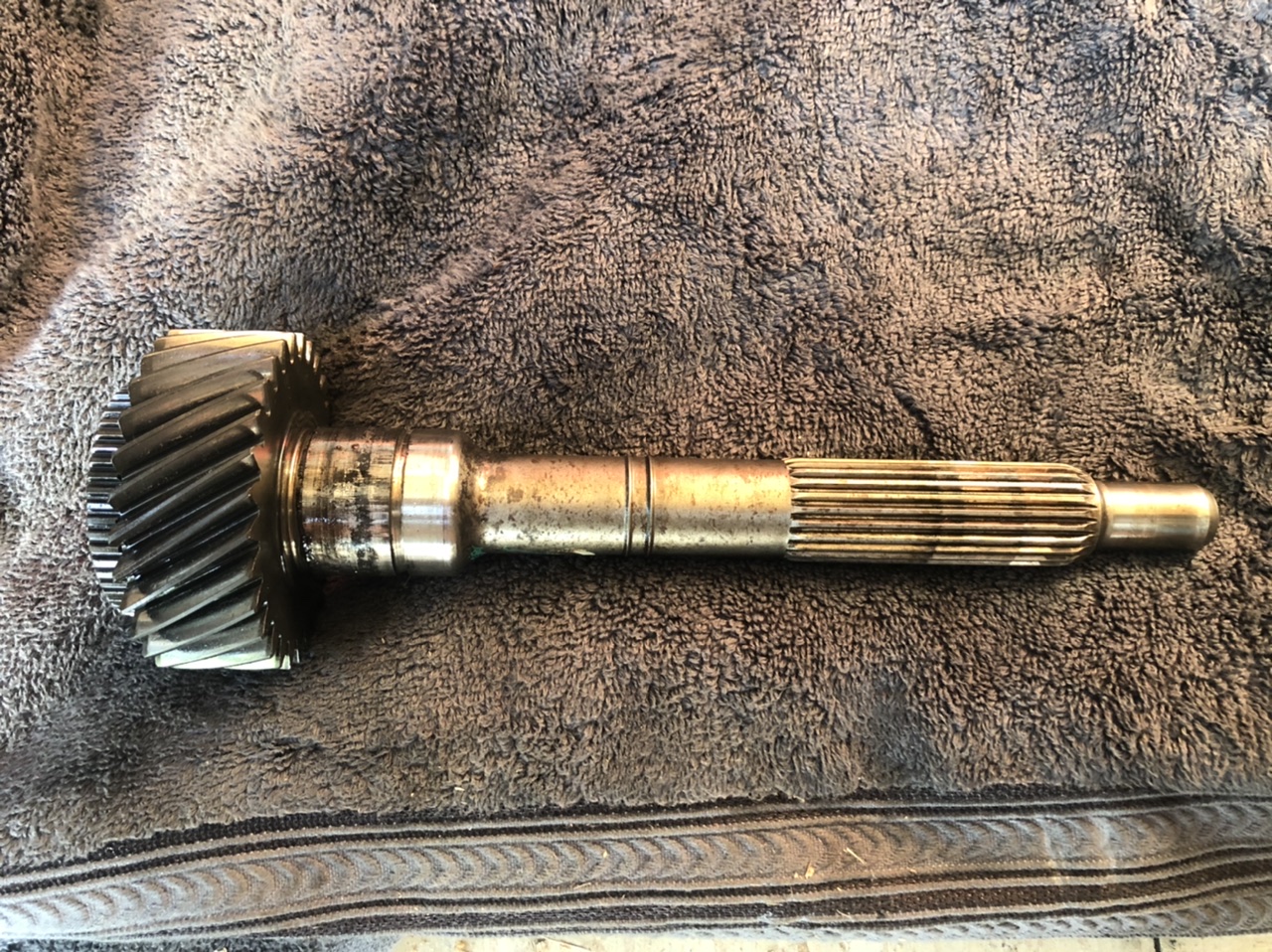 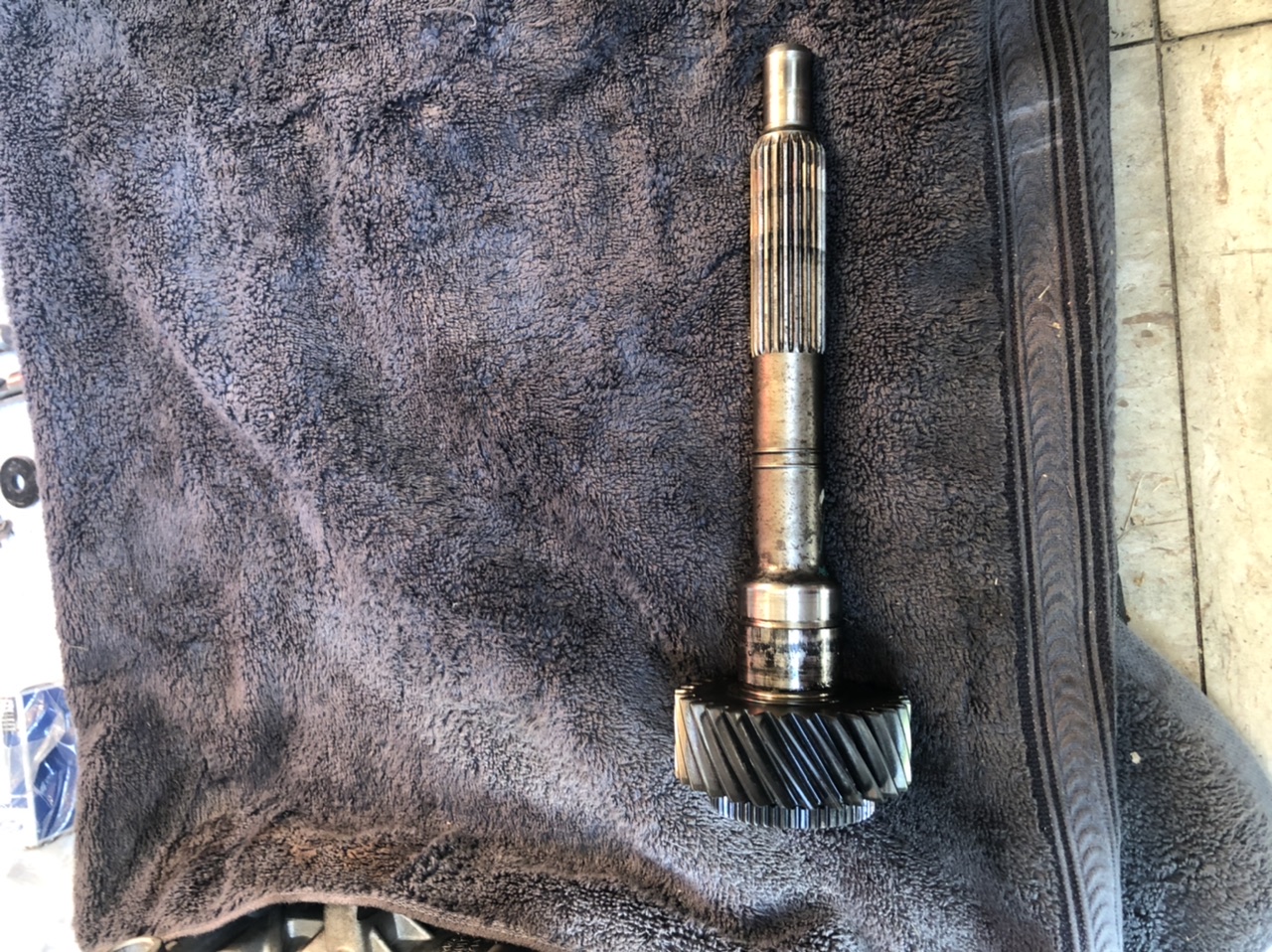 Alright gents, parts are in! Everything for the internals...Gears, Synchros, bearings..Are going in tomorrow! Will post pics, I have a small fortune in parts here..$$$. If anyone wants a upgrade and is in the San Antonio/ Austin area or close..I’m going to start building these. With everything I purchased and the upgrades to the shift forks and REM polish the trans should be good for 600+ torque..Fingers crossed. 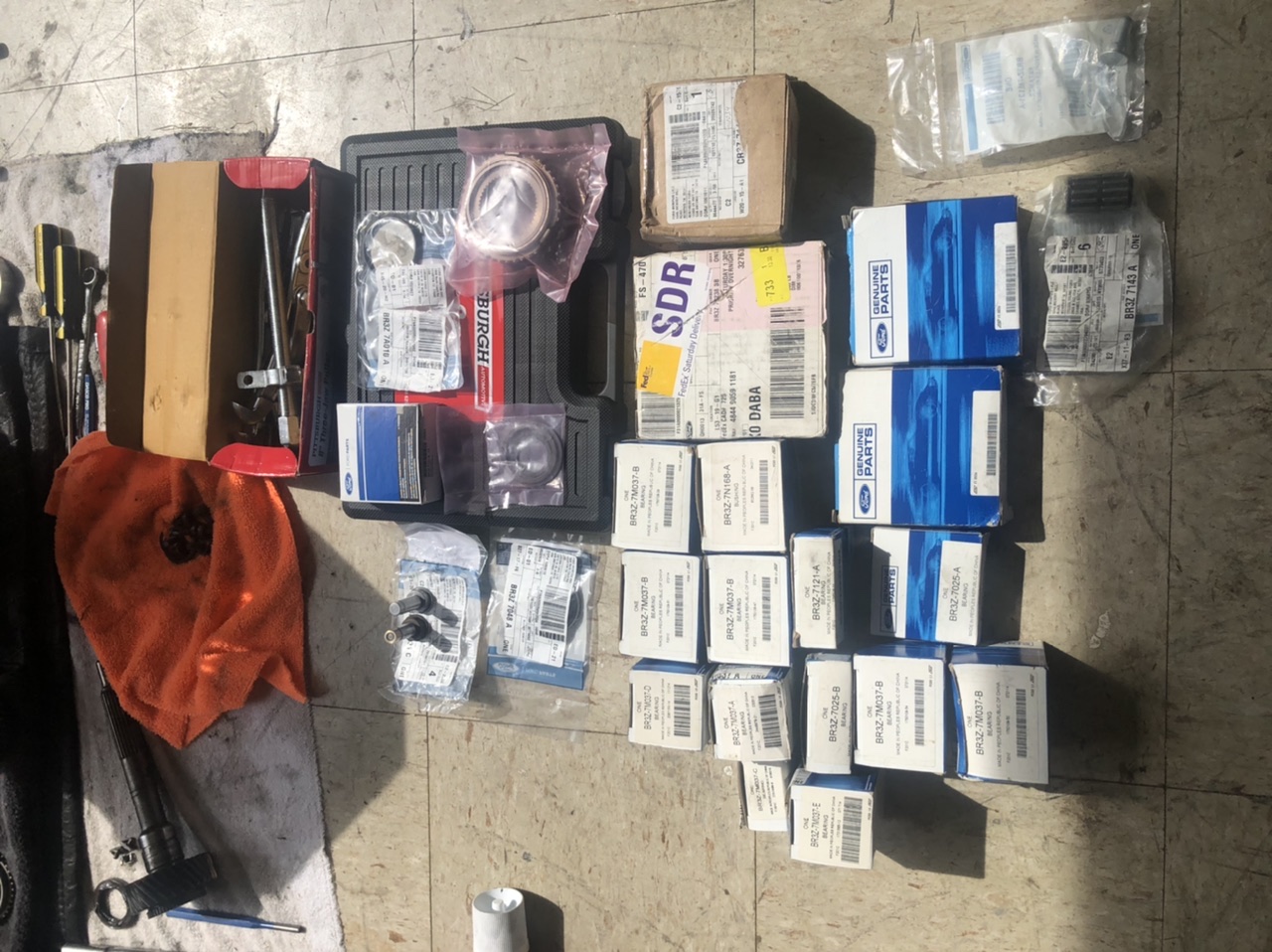 I’m waiting on two parts, the upgraded AMP input shaft and bronze shift fork pads. Once those get here the trans will be fully assembled. Stay tuned.

How is the mt82 rebuild project going? I have a ‘12 5.0 mt82 and down the street from you, in the buda/Kyle area. My car is currently down for a new clutch and flywheel.