Major Mod | The Whipple Supercharger for the 7.3L Godzilla V8 is Here

Major Mod | The Whipple Supercharger for the 7.3L Godzilla V8 is Here 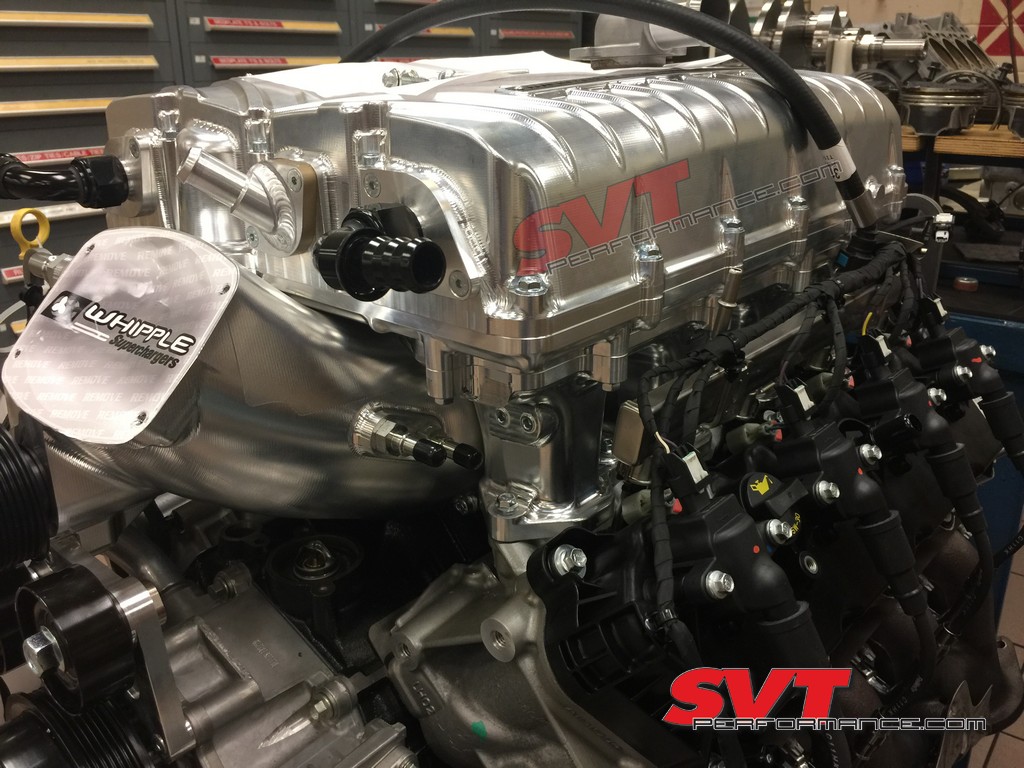 We’ve been telling you guys that this has been in the works, and here it finally is. Feast your eyes on the Whipple Supercharger for the Ford 7.3L Godzilla V8. We first heard about this beast of a blower being tested over a year ago. Based on the early information from our sources in Ford I knew the 7.3L was going to be a game changer. When you mix boost into the equation there was no doubt left that we were going to see a paradigm shift in the truck engine market. It looks like Whipple is going to be leading the way into the brave new world modern Ford Big-Inch Performance.


Don't have time to read? We have a video explaining the features of Whipple's new blower for Ford's 7.3L Godzilla V8.​ 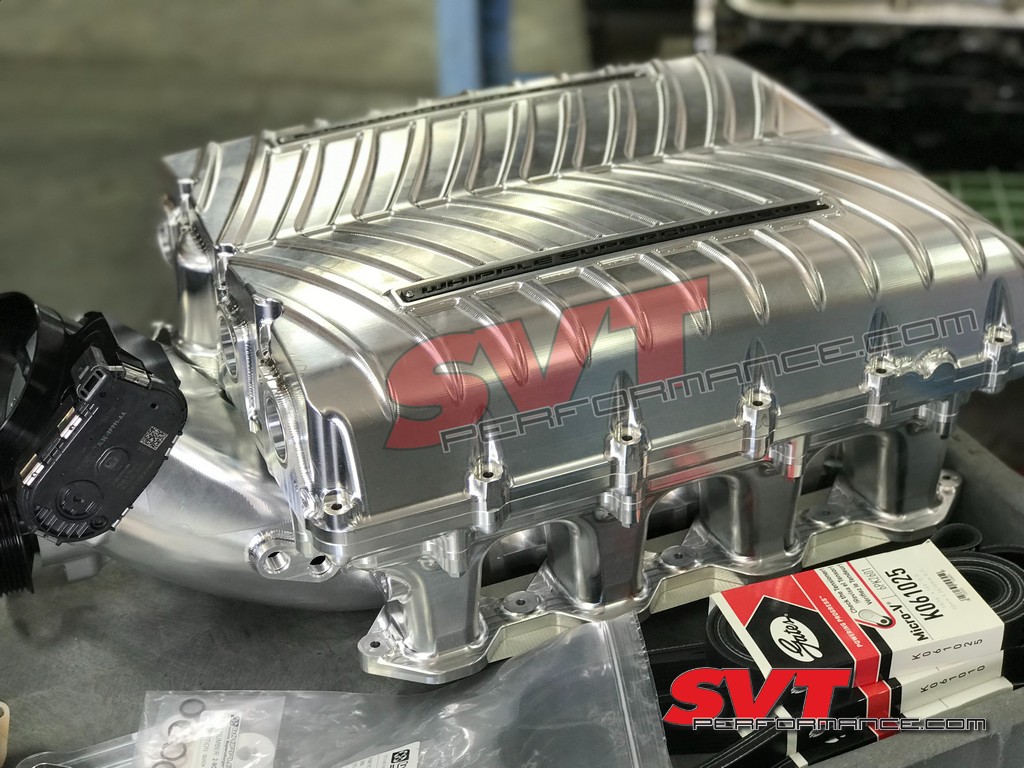 Check out those intake runners. No fuel injectors there on the 7.3L, because they are mounted directly in the head.
​
We have an exclusive first look at some early renderings of Whipple’s 3.0L Gen V Supercharger head unit for the 7.3L As usual, Whipple has provided us with several examples of the color options that will be available. One thing to note though, these renderings were created before the final CAD files were available from Ford so the inlet is shaped differently from the final product. Still, it gives you a good idea of what the UPS driver could be leaving on your porch in the near future. 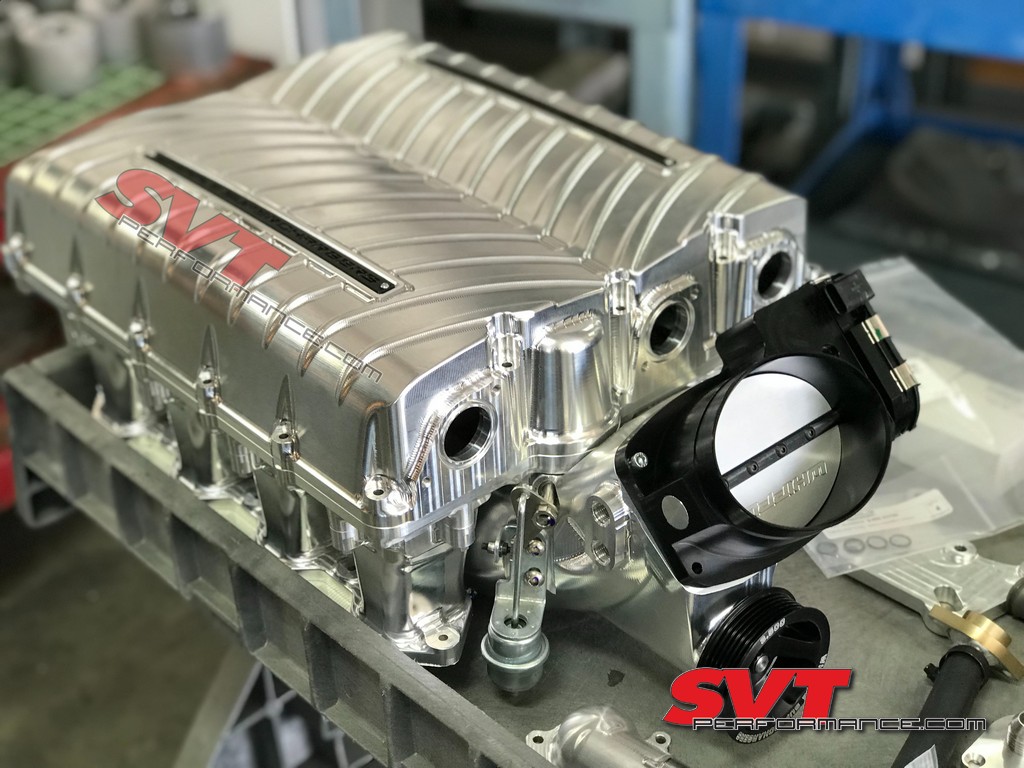 You really get a sense of the intercooler core size with this pic. Def have to tick the box for the optional massive Whipple oval throttle body.​
Even more interestingly, we have several images of the first billet prototype 7.3L Whipple Supercharger head-unit. This is much closer to what the finished product will actually look like. Of course the production piece will be constructed of cast aluminum instead of billet. This version has the throttle body located in the correct position, unlike the early renderings above. Speaking of throttle body, it appears that Whipple has made provisions to use their Legendarily Massive Oval Bore TB. Another interesting feature to note, is that on the 7.3L the fuel injectors are located in the cylinder heads instead of the intake runners. 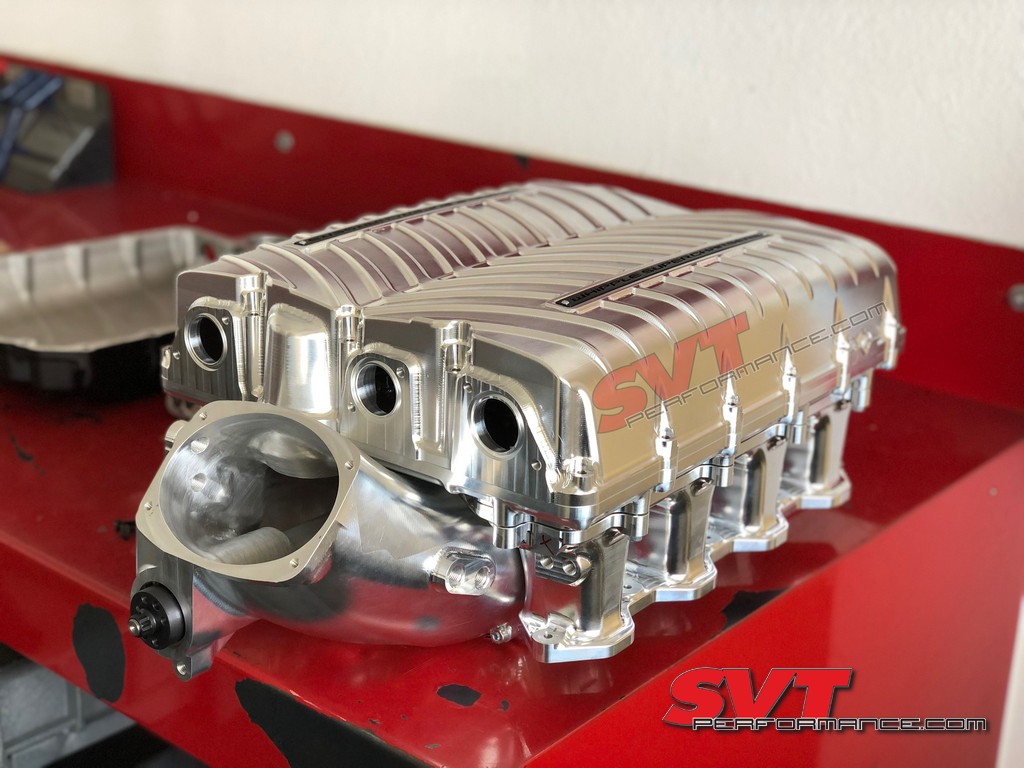 The blower intake is designed to give a wide open path straight to the twin-screw rotors.​
If this Whipple blower looks familiar, it should. The design is very similar to the kit they sell for the 2018 5.0L Coyote engines. It uses the same style triple intercooler setup, with one key difference. The 7.3L blower unit will have much larger intercooler cores. If you think about the duty cycle these engines are likely to see, that makes perfect sense. Instead of making quick ¼ mile blasts in a 3,800 pound car, a 7.3L equipped Super Duty is more likely to find itself loaded to 20,000 pounds pulling a 5 mile long 7% grade at interstate speeds. Even at 4-6 pounds of boost, that type of load can generate a tremendous amount of heat and having a Super Duty sized intercooling system is required to perform that level of work. 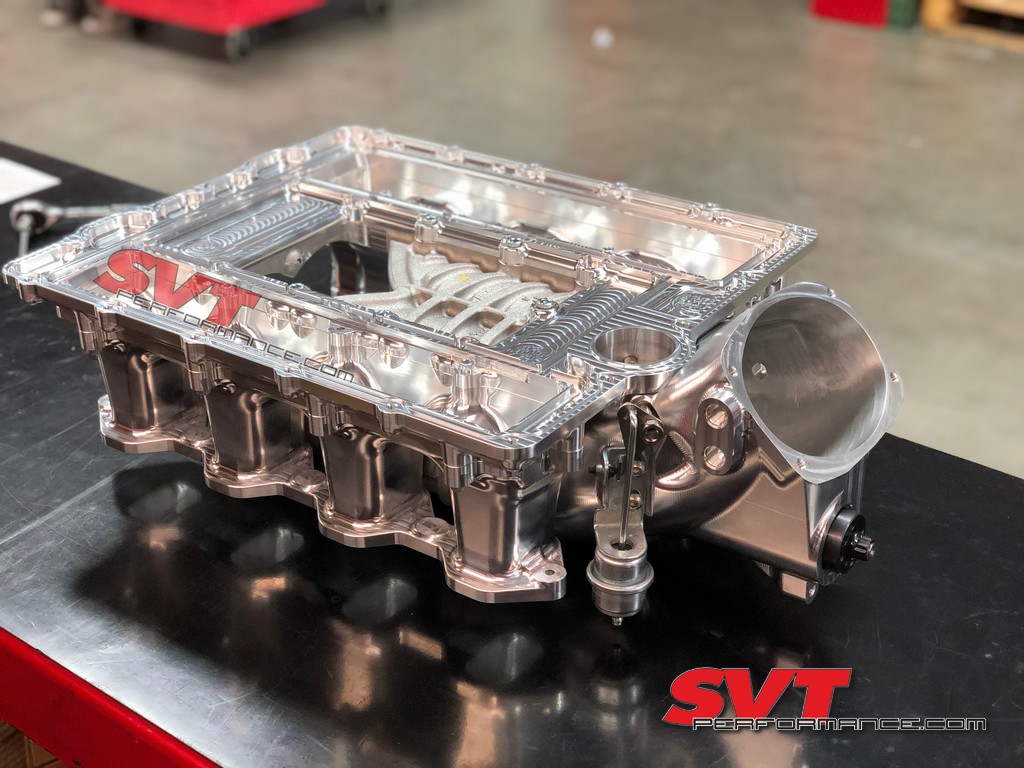 Here you can see how the bypass valve works, and get an idea how the pulley will mount to the blower drive.​
So what can we expect for upgrades and performance? First, the base kit is likely to make use of the factory throttle body and 6-Rib Belt setup. However, we know you’ll be able to get a TB upgrade and Whipple tells us they are working on a 10-Rib Belt system. As for power output, we’re a little too early in the testing process to give out concrete figures. But Whipple did let us know that on low boost (8 PSI) and they are seeing well into the 700HP range with torque to match. That may not be the power level the kit is released at for the Super Duty, as it will require a conservative truck-based tune. Still, it hints at the possibility of extreme power production if you want to crank it up. 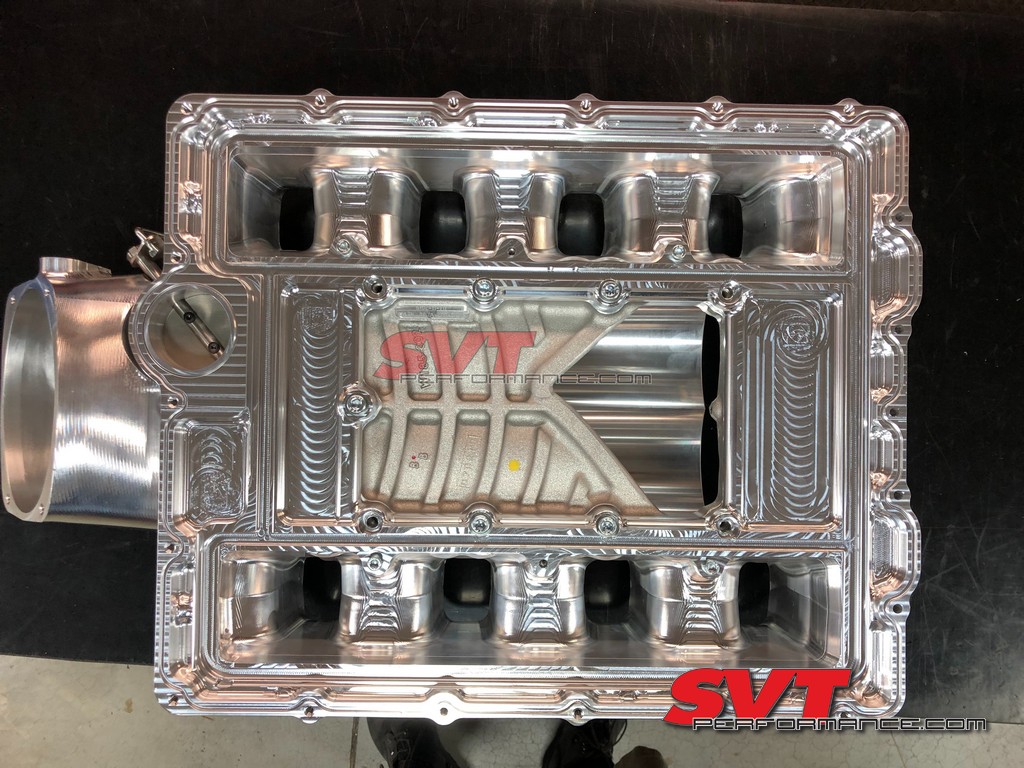 The blower discharge port has been similarly optimized. Intake ports have a nice straight shot into the heads too. This billet aluminum prototype looks great.​
That to mention nothing of the possibility of a kit built around Whipple’s upcoming 3.8L blower. We’ve heard rumors of a couple prototype 7.3L builds running around with Whipple 3.8s bolted on top, but those will be finding their way into applications besides trucks. I’ll leave it to your imagination as to what those might be. But one thing is certain, with a blower like the 3.0L Gen V Whipple on the way the future of Ford 7.3L Gas performance certainly looks bright. 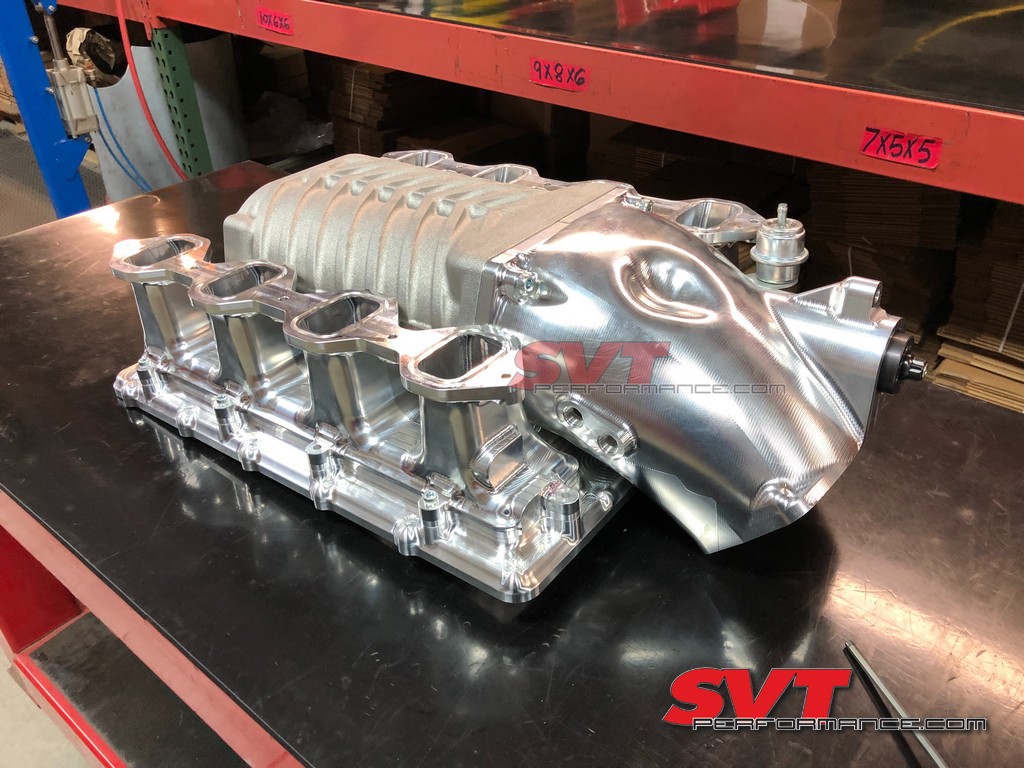 You can see the modularity of Whipple's Gen V Ford blower designs. Unique kits can be made just by changing out a few parts. That will shorten the design and prototyping phase and aid Whipple in being first to market with new supercharger kits. 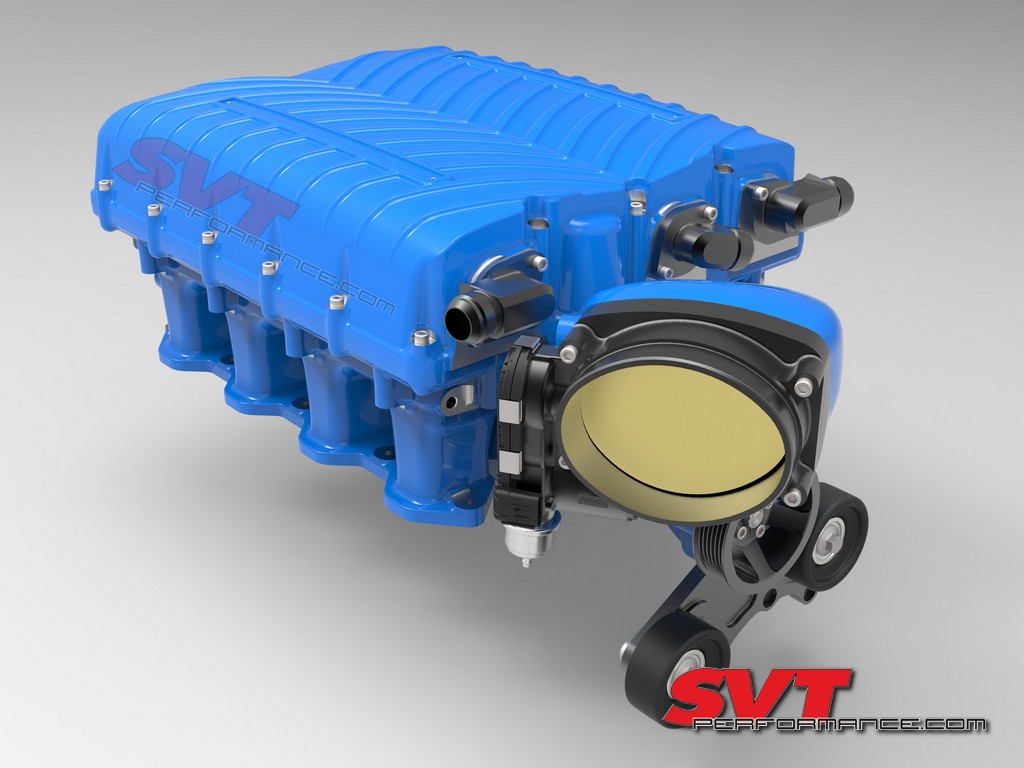 Not sure what color you want your 7.3L blower to be? We have some options for you. 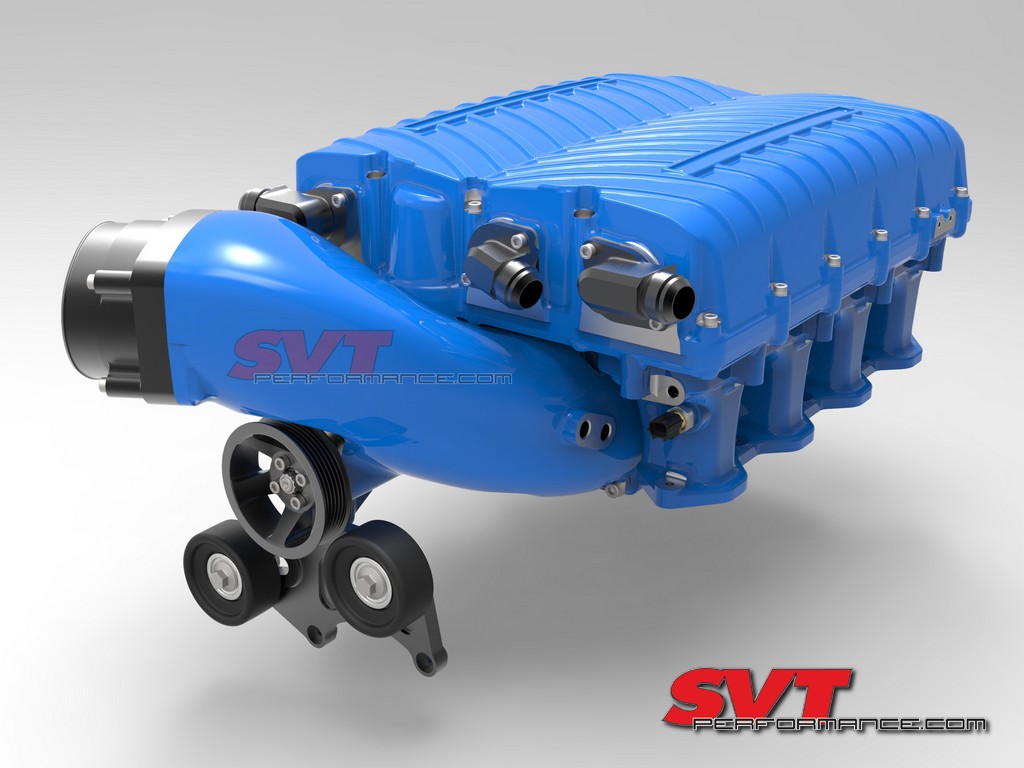 You can see that these CAD renderings were fairly early stage designs. The blower intake ended up being changed quite a bit. 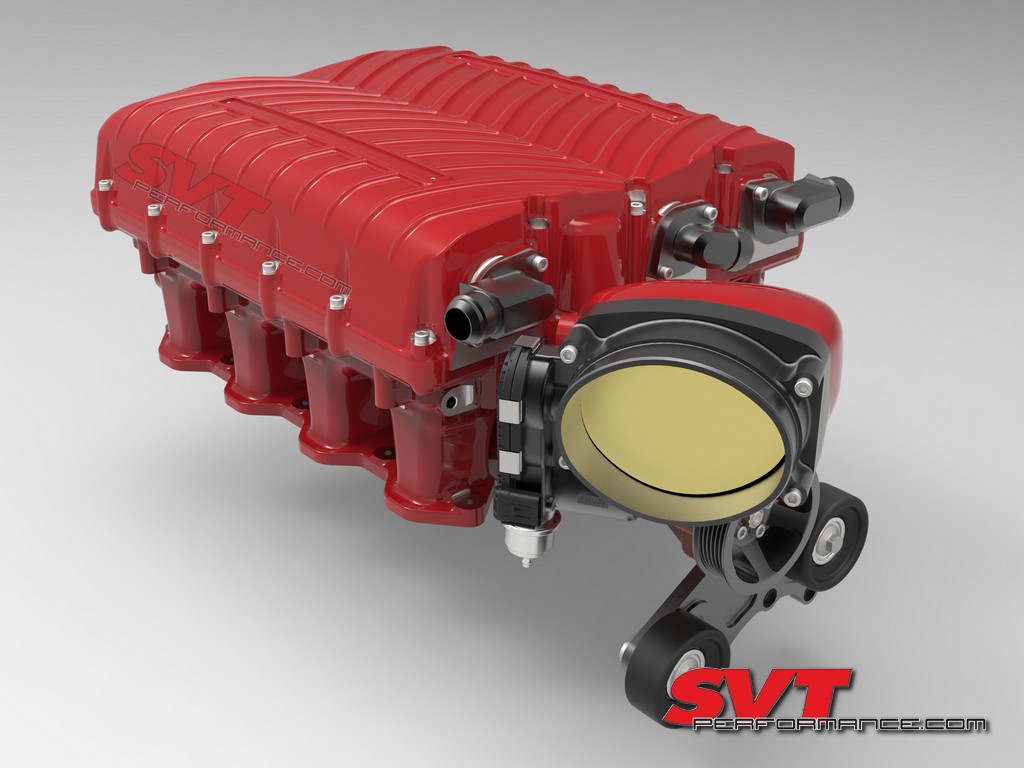 Red is going to be a tough choice to pass up. This would look great under the hood of a Tremor.​ 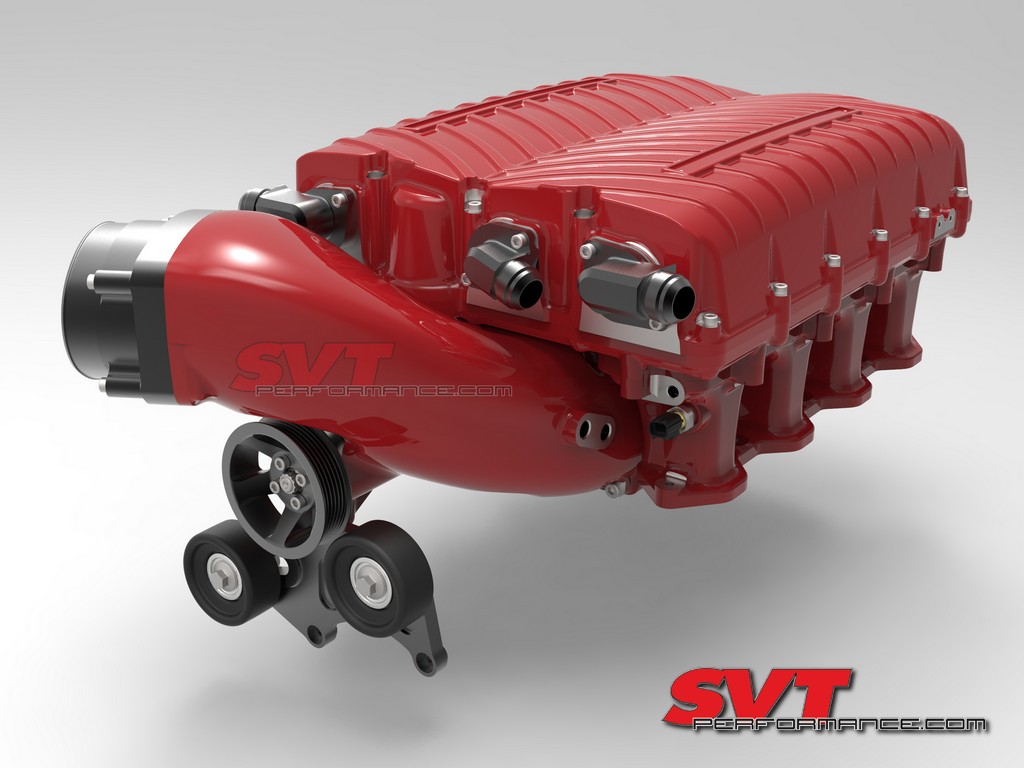 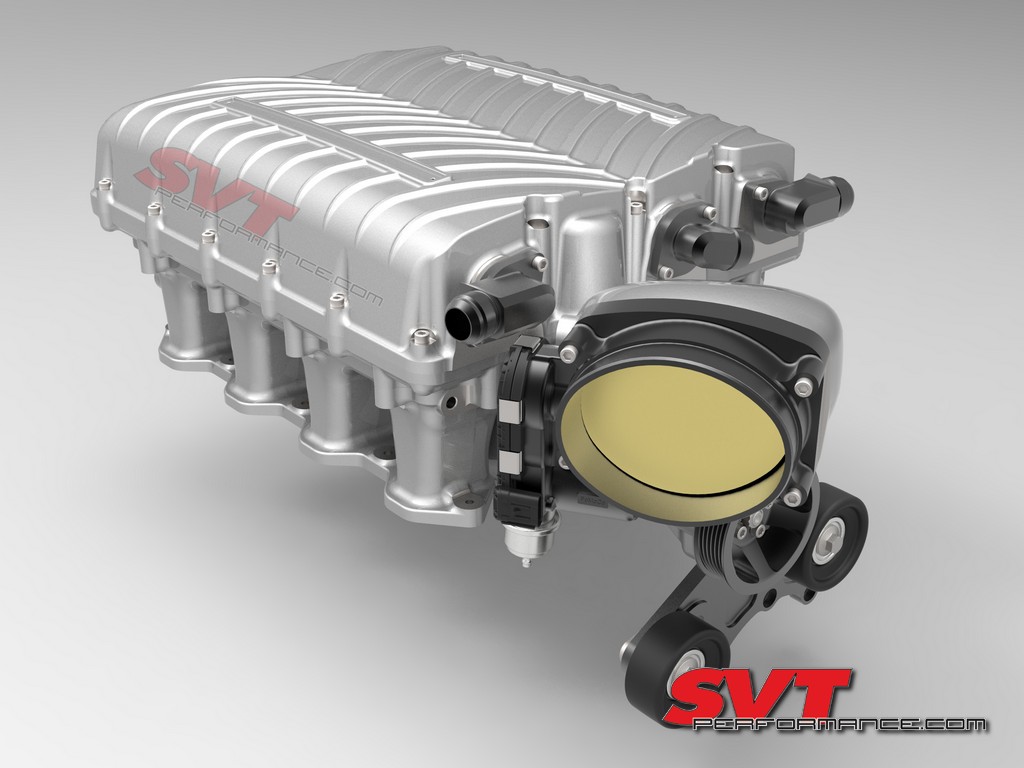 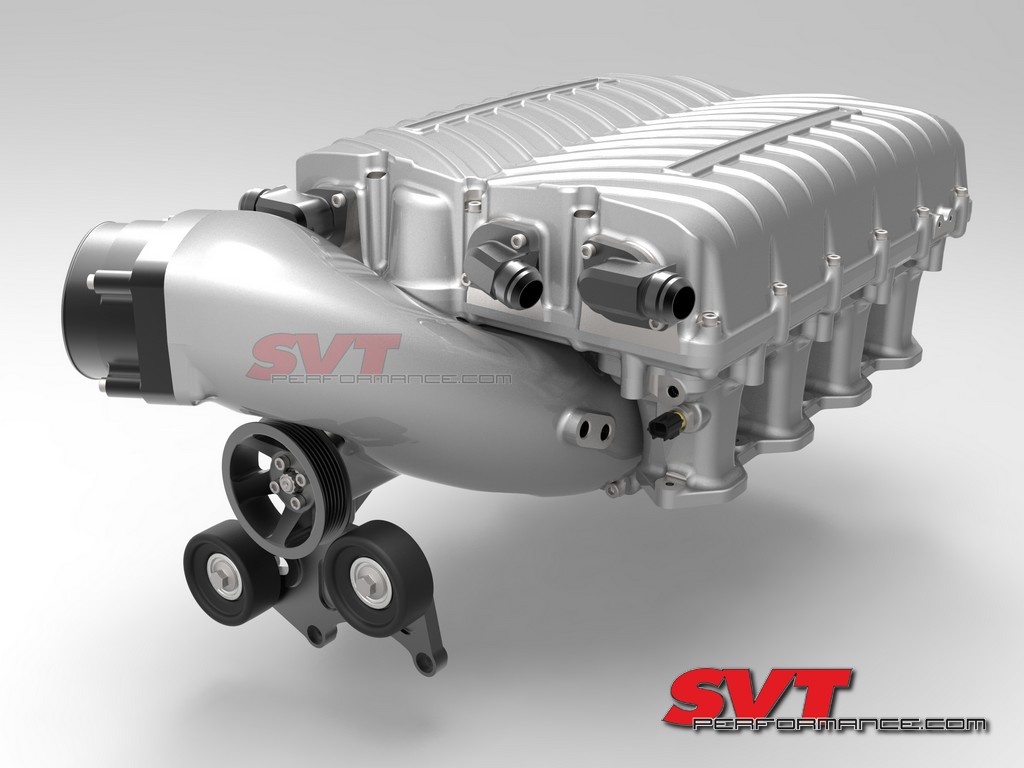 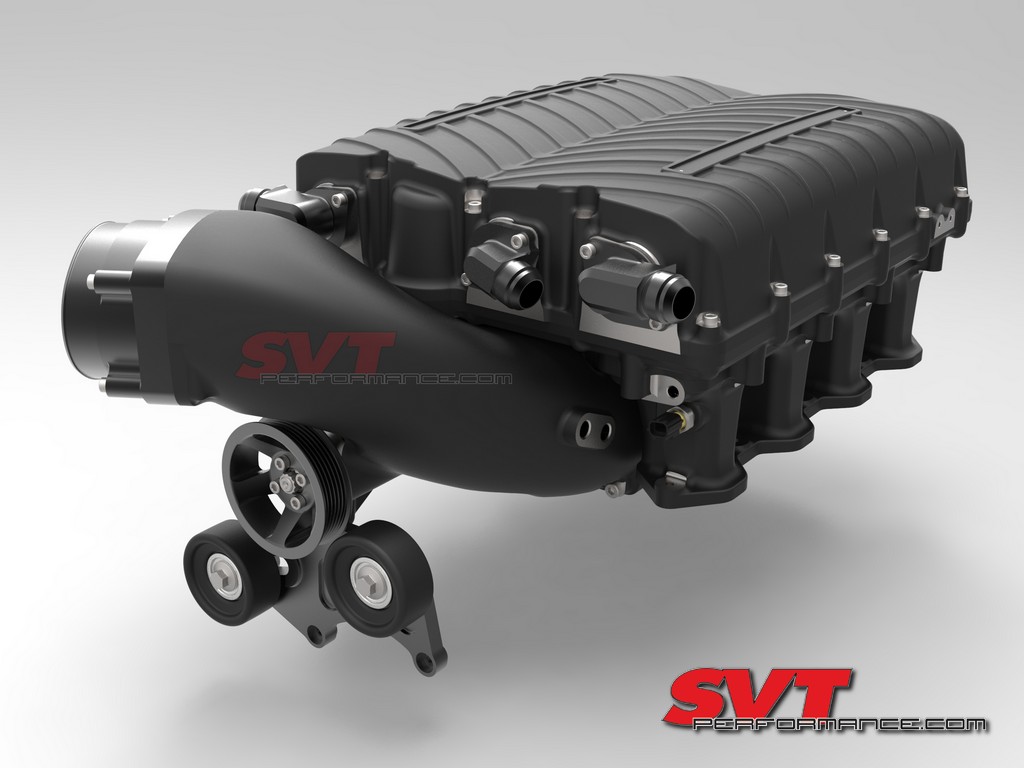 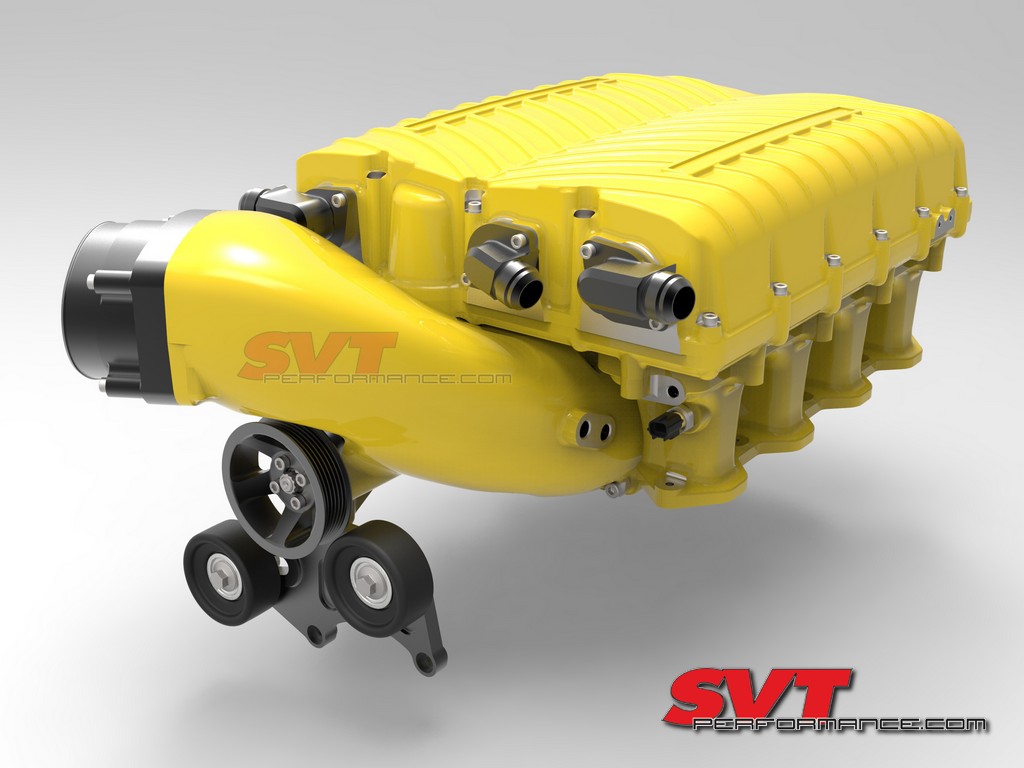 Bad ass! I'd think the 3.8 would be better suited but at least we'll see!

Nice, but want a turbo kit.

Bad ass. If Ford could get their shit together and get the 7.3 Super Duty the flex fuel option as factory, this would be a home run!

Man, they should be putting the 7.3 into the next gen raptor with the 3.8 whipple as factory. They would sell like hot cakes.

If this engine ends up holding any sort of power with factory internals, the 7.3 with that Whipple will be under (or through) the hood of my mustang.

Don’t be an idiot

The 3.8 blower would be a hell of a boat setup

It looks crazy nice.
The blower looks like it should be 7 liters from the top view though.
9

Ive been looking hard at 7.3 250s, this is making my decision a little easier. What a set up that would be

Damn for the price of a Powerstroke you could have this.

7998 said:
Damn for the price of a Powerstroke you could have this.
Click to expand...

Especially with gas prices low in most of your states

me32 said:
Especially with gas prices low in most of your states
Click to expand...

Especially when you add in maintenance costs.

Wow, awesome stuff.
Can't wait to see what the final numbers are after a dyno.

Fantastic article. Looking forward to getting my hands on one of these combo's this year.