I recently installed an AJE K-member with a-arms, this was his universal 99-04 Mustang k-member so it uses a solid motor mount, I also used AJE's new C/C plate that mounts under the strut tower. The car still has the Bilstein's and has H&R Springs. Everything rode fine until this swap.

Right away I noticed quite a bit of bouncing and didn't think a 50lb change in the front end could cause so much. When you drive it it feelis like either some geometery is off or the struts/springs are now bottoming out. I expected a rougher ride after the install but right now I don't even want to drive it.

It still needs a professional alignment as it is only driveway adjusted, was wondering if the strut was too much up and down it would be rougher than if it was layed back and able to absorb some of the bumps.

Right now my steps were going to be:

1. Alignment
2. Maybe a new set of coil spring isolators
3. Thinking about junking the C/C plates and going to a traditional style in case these are just taking too much travel away from the strut. This would also mean losing the strut tower brace I have.
4. Was also thinking coil-overs so I could add some ride height (I don't have a before and after measurement to see if it is lower. I have tried comparing pictures to see if it really is lower but it's not difinitive.

Right now if my k-member and a-arms weren't 1200 miles away I would be putting them back in right now as it rode perfect before.

This is how the current strut-tower C/C plate is set-up: 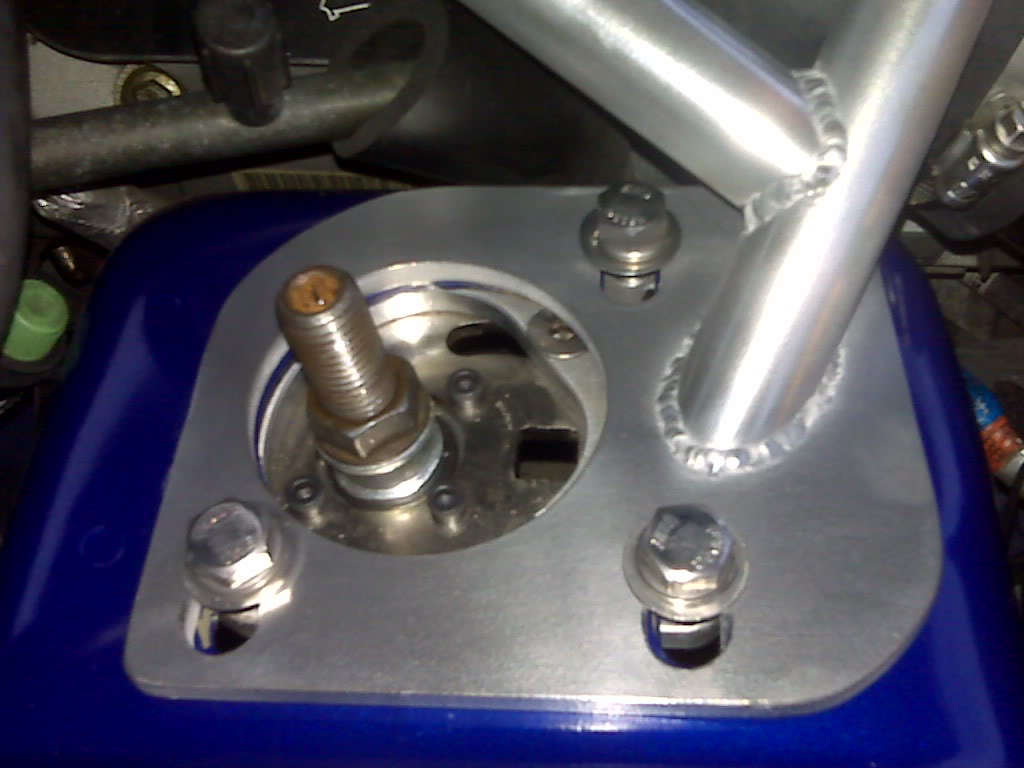 Interested in seeing some responses I'm thinking of going AJE but keeping the stock lower A-arms. Def. don't want the same issues as you.
T

Here are thoughts from me

1. Struts bottoming out
2. Weight loss causes spring rate to be too much and causes bounciness

I really think that it's probably lost range of motion in the struts.

did you have to use the solid mounts, or could you have used poly with it? Not saying this is your problem, but I'm also considering this k-member, so figured I would ask, anyway.;-)

black 10th vert said:
did you have to use the solid mounts, or could you have used poly with it? Not saying this is your problem, but I'm also considering this k-member, so figured I would ask, anyway.;-)
Click to expand...

This set-up was provided by AJE and is his new universal k-member so this particular one has to use the universal solid mount, but you could probably contact him and have him build an old style one where you could use regular motor mounts.

Update: Bilsteins were definately bottomed out, in fact with AJEs caontrol arms he must have a measurement issue as the car was sitting on the bumpstops just sitting still. I couldn't get the struts apart so I put some 87-93 struts in, better but then I had a huge rattle. The car dropped some more so I knew the struts were actually holding the car up.

That rattle turned out to be a bent c/c plate so out those came. Besides his new c/c plates can't be adjusted without opening yor strut tower opening up, at least it appeared that way to me.

I also used an extra isolator and trimmed it down and put it in the bottom of the spring pocket to soften the ride and raise the car a little. It's better but stuff still rattles inside the car. May go to a k-member that uses a stock style motor mount, also going to have to go coilover set-up to get ride height correct.

what were the a arm bushings, if they are binding it can alter the ride
T

Coilovers are gods gift to suspension freaks. Lol I love mine. Silent and ride awesome and they are ride height adjustable!!! Good luck mang!

Then why do my coil overs sound like shit??