Thats what she said

Curious if anyone here has ever purchased an existing business?

What are some things to look out for?

I have a friend selling a small engine shop. They repair small engines and sell mowers, weed eaters, leaf blowers, etc. It's an ExMark and Snapper dealer. My friend said he is selling to retire.

But from a business prospective what are some things I should ask to see? books? tax returns? etc?

I dont know much about owning/buying a business like this and was looking for some advise/opinions.

i would see if there's an SBA office near you, sometimes they have resources that can help you evaluate things like this. Definitely need to have the books/returns evaluated by an accountant for cash flow etc...know what the inventory is and value, terms of the lease etc... It would suck to buy it, move in and the lease is up in 6 months and get plowed with a crazy rent increase, if it's even transferable

Fixing the engines is one thing - running the business is a whole other deal.

sounds like you're basically buying the name/reputation, tools and inventory. I have no clue how to value that, I'm normally more involved with things that involve multi-year service agreements.

1.) I would want tax returns. More than likely, he's understating income so I would want to buy it off of the returns and not what he verbally says he makes.
2.) Is he the only employee? Would he be willing to stick around for 30 days to show you how it operates? If he's the only one, and even if he's willing to stick around for a while, I would want to know 100% upfront what all he does at the store. If there are things he does that you can't do, now you have to hire someone else, and that's added expense.
3.) Check with the building owner about a lease contract and if it's transferable. If he's been there a long time, I'd guess the rent is low and the landlord will up it significantly when it changes hands.
4.) I would want to know what's in current inventory, less than 60 days old...and what's in old aged inventory 60 days +. Whatever is in old aged inventory I'd want to know what the write down schedule is like and the value compared to retail that are currently on the books. Depending on how that part looks, I wouldn't buy any of the old inventory.
5.) I would ask to see the franchise agreements as well. It's possible that he could sell to you, and if you don't meet the manufacturer's standards the first 6-12 months, they could pull the agreement. The standards for a new franchisee are likely higher than for someone that has been with them and grandfathered in for years.
6.) I would do an analysis on how he gets his business now. Whether it's word of mouth, online advertising, all drive by traffic, etc.
7.) As far as other agreements go, I would want to know every agreement that he has with any vendors, companies, representatives etc. I would want to know the nature of them, the period it's under contract and if it's transferable or not. Hopefully they're all transferable, but are also able to be cancelled without repercussions. That would allow you to cherry pick.

Just a few things off the top of my head.
A

If he's your friend I'm sure he would let you shadow for a month. See if you even like the business during that time period.

1. Look at returns filed, not his word of what he makes.
2. The only real value is in the current inventory and the franchise agreements (and those might not be worth much if anything). Reach out to the manufactures and see what a new agreement costs, if anything other than a large initial purchase of inventory.
3. Do you want to sell those products or would you rather sell Toro and Stihl? If you don't really believe in those brands then the agreements are worthless if you are going to switch anyways.

I'd add to the above great advice. This may be more on the side of negotiation rather whan "what to look for".

Often times I see former owners have their final payments for the business tied to performance objectives/criteria you both create and agree to (including a timeline). That way the former owner is tied to his promises and is (nearly) equally motivated to see you be successful. Don't suggest a performance hold-back until you have a price for the business on the table. If you put this out too early, they will raise the price to ensure their risk of the performance hold-back is covered.

Prior to putting a business up for sale, I've seen folks drop product prices and give crazy warranties in order to increase their backlog and sell the business at higher values. New owner walks in and half of what he has is a paper tiger (and a bunch of angry new clients). Ensure you know what your warranty liabilities are going to be.
B

I've purchased numerous existing businesses and am working at one at this very moment. Get yourself a broker to walk you through everything. It's an expense that will potentially save your ass.

I am the liquor

At the very least you need a knowledgeable accountant to go over his tax returns and his profit and losses sheet, assuming he’s kept accurate books.

Also don’t assume he’s making a profit without doing your due diligence. Remember you’re buying a business to generate income, otherwise you’re better off just buying his building and starting from scratch.

It's for your own protection

I cant see where you are from using my phone. Keep in mind, that this administration is trying to get rid of all ice. Look at Cali banning gas powered lawn equipment.

You could make a killing or the other way around.
B

Location
The land of commies and socialists!

Riddla said:
I cant see where you are from using my phone. Keep in mind, that this administration is trying to get rid of all ice. Look at Cali banning gas powered lawn equipment.

You could make a killing or the other way around.
Click to expand...

This! I however see in the coming years a business like this mostly catering to landscaping companies and homeowners who have large properties to maintain.

I say this because the battery technology flat out isn't there at the moment for them. For the track home owner they are fine but otherwise have a long way to go.

Somewhere between book value and net profit is a fair price.

Dave Ramsey has a great article on buying a business and covering your ass. 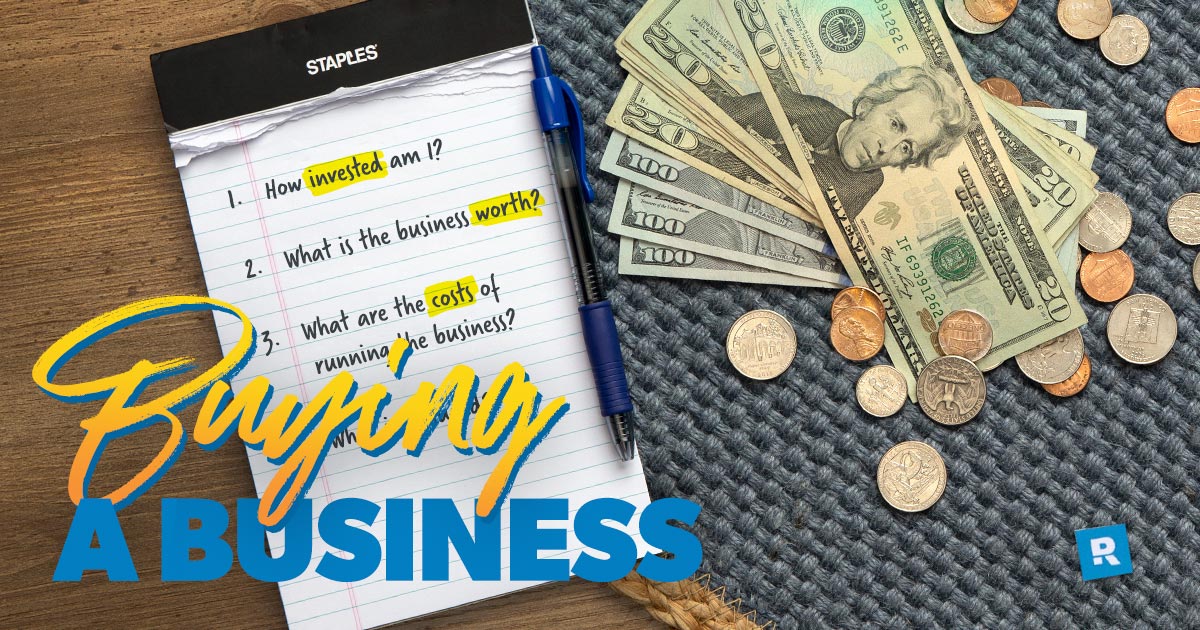 How to Buy a Business: 4 Questions You Need to Ask

So, you want to buy a business? How do you even get started? You start by answering these four questions to see if buying is a good idea.

Ask to see the books for the past 5 years and let a CPA go over them and give an estimate/appraisal of the business.

Get an estimate/valuation of the land, shop/building and the equipment on hand.
O

Parts and products are very hard to get right now. I was talking with my dealer last week and his shelves are mostly empty. It takes cash to survive these times.

if this is your very first business, I would say **** no on purchasing from another owner (it's different if you are already successful)

there is a reason they are selling, and most of the time it isn't worth the cost, unless you get it WAYYYY under value . The books you are buying comes at a huge cost.