01silverstang said:
So you think it's spark blow out? I was expecting you to say it's the stock alternator not providing enough power to the fuel pump at higher rpm.
Click to expand...

Well i just know from all the years i had that style motor that plug gap is definitely too big, spark blow out is more "breaking up" than just cutting off, sounds like a different issue maybe the stock alt taking a shit? Who knows. I have a nice 200amp unit for you tho lol

BOTTLEFED5 said:
Well i just know from all the years i had that style motor that plug gap is definitely too big, spark blow out is more "breaking up" than just cutting off, sounds like a different issue maybe the stock alt taking a shit? Who knows. I have a nice 200amp unit for you tho lol

I'll keep that in mind. I want to check fuel pressure at the rail and go from there... cant find much online about this issue with our cars. No hard start, no cruising issue, or even part throttle issues. A couple weeks back did a pull in second with no issues.

Here's a couple videos from today, AFR was good the whole time.

Sounded like it wanted to cut off when you started to accelerate? Could just be the video?

BOTTLEFED5 said:
Sounded like it wanted to cut off when you started to accelerate? Could just be the video?

Do you mean before I went WOT? Something weird is definitely going on… someone on another thread suggested checking to see if maybe it had a WOT box the previous owner may not have been aware of?

01silverstang said:
Do you mean before I went WOT? Something weird is definitely going on… someone on another thread suggested checking to see if maybe it had a WOT box the previous owner may not have been aware of?
Click to expand...

Yea it seemed like just under "aggressive " acceleration it did something, like i said maybe its just the video sound

Well it's been a little while... finally got the SCT X4 and did a couple idle data logs and sent a screen shot to Mike at DynotuneMP. He advised the log looked fine, with the exception of battery voltage (which is measured at the PCM) which was only 7.94v. I measured at the battery during this time and the multimeter was reporting 14.2-14.4v at idle. Soooooo... I need to figure out why the voltage is dropping so badly, a friend suggested before checking the "VPWR" pins on the PCM, to check the PCM power relay output from the CCRM.

I have checked the grounds on each side of the radiator support and they are good. The negative terminal is tight, and all fuses are showing 12.5v... the ground directly by the PCM appears to have never been touched.

The only two similar situations I can think of, are when I had a loose negative terminal the engine bay fuse box showed 7'ish volts. My friend who suggested the PCM power relay, advised he had the internal fuel pump relay fail in his 96' Cobra which led to 7'ish volts to his fuel pump. Can't find any other similar situations via search/google.

Last night I checked the CCRM, battery voltage was a little low (11.8v) as my son at some point during the day opened the trunk and the trunk lights had been running until the evening. Key On Engine Off I checked CCRM PIN 12 and 24 both listed as PCM power. PIN 12 had 11.67v but PIN 24 had 0.0v. Would this indicate a problem with the PCM power relay within the CCRM?

Edit: Checked the next day and must have not pushed the needle in far enough because I got power to both. I think the voltage reading is messed up in the config file or live link.

I did find that the front spark plug on the drivers side is completely loose.
Last edited: Aug 5, 2021

Ordered new Ford Performance Spark Plug Wires last Friday from American Muscle, unfortunately they use the world's worst shipping company FedEx and so while they initially estimated Sunday delivery here we are almost a week later with them in Kentucky somewhere.

Going to test the coils tonight.

Got the new wires installed and came to realize that the old wires weren’t even the same… some were marked MSD some appeared to be original. Started the car and on cold start AFR was 14.2 leaning out to mid 15’s, which is better than the 17’s it had been bouncing around in…

I also used my new multimeter to test my coils, primary resistance was fine… Secondary resistance per Haynes should be 6.5 to 11.5 K-ohms. I set the meter to 20k ohms and measured the 2/8 and 1/6 pairings on each coil and 2/8 was 14.0 and the 1/6 wasn't stable but moved between upper 13’a and the 14’s… would those numbers indicate both coils need replaced?

So on the path to figuring out what's going on with my car, I ordered some FRPP 9mm plug wires. Turns out I had a mix of stock 8mm and MSD 8.5mm on the car, and this was needed maintenance even though I knew this wasn't the entirety of the problem. 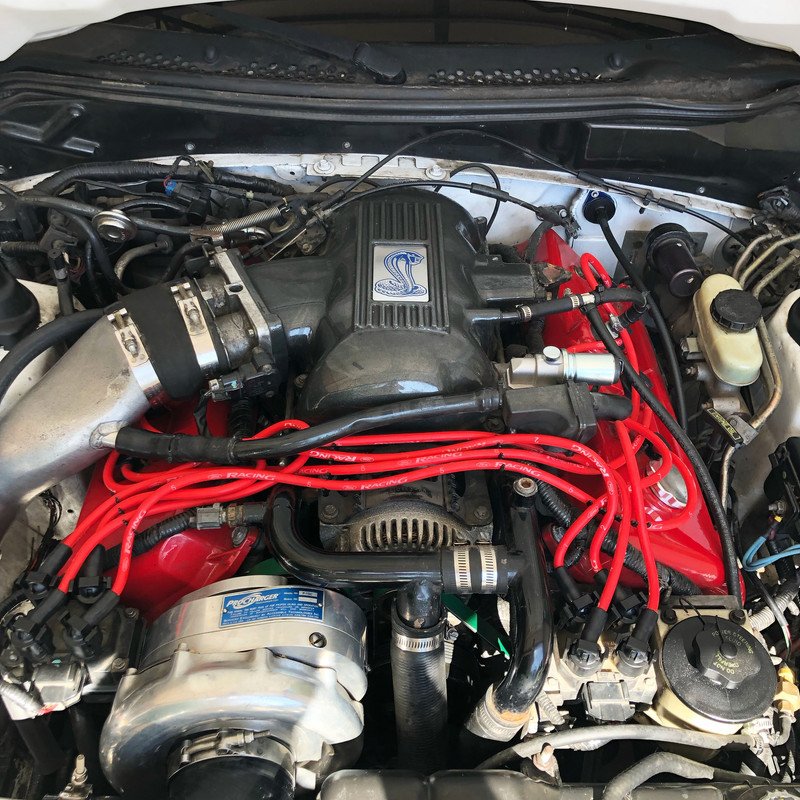 I wanted black, but FRPP come in Blue or Red, thought the red would be too much with the valve covers but have been pleasantly surprised at how good they look. I also think I have a good idea as too my issue. Hope it doesn't break the rules but I'll post a thread I found on another forum:

Now that car was a 95' GT but the symptoms are almost the exact same, as is the troubleshooting they did which did not fix the problem. Since I don't know how old the fuel pump is, and that it sat for an extended period of time... coupled with no CEL or Codes, it's likely that it's starting to fail under severe load. Drives fine at low load and part throttle, but as soon as the volume needs to come up... it struggles and the cut-out occurs. Thoughts?

I discovered the cause of the cut out and fixed it. When I went to install the new VMP MAF harness/connector, and clock the housing, a bunch of water drained out of the intercooler piping when I disconnected the couplers. I spent an evening removing the front bumper, drying everything out, and reinstalling everything checking all couplers to make sure they were well connected and tight. My assumption is the day I got my new tires installed and got caught in heavy rain on the way home (side streets flooded, etc.) that water must have been sucked up. I was worried about it as the previous owner removed fender liners, and I have an Anderson Motorsport Power Pipe. I assumed once home I was ok, but the cut out started the next time I drove it that evening. I think under part throttle or low load everything was fine, but when the car transitioned from vacuum to boost, enough water got pulled onto the sensor that it completed cooled it sending the MAF count to 1023.

Since fixing it, I have finally gotten to take my oldest son on his first ever Mustang ride as well as debut the car at the Batavia Block Party in my town. 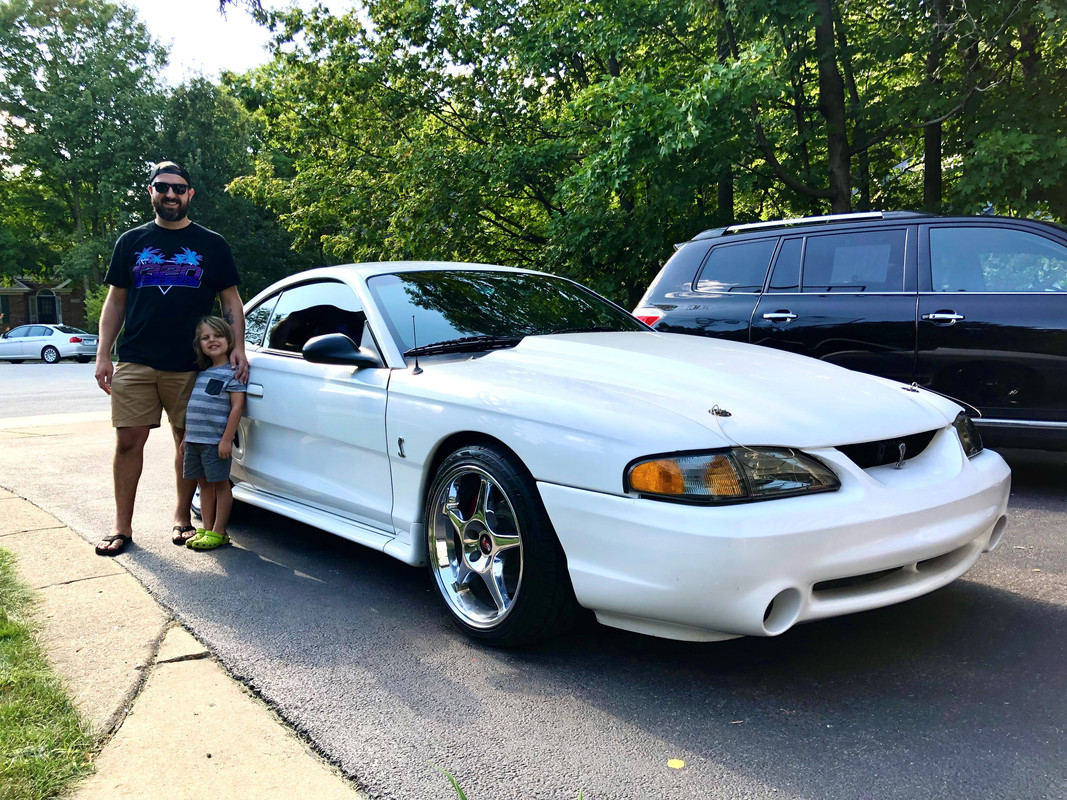 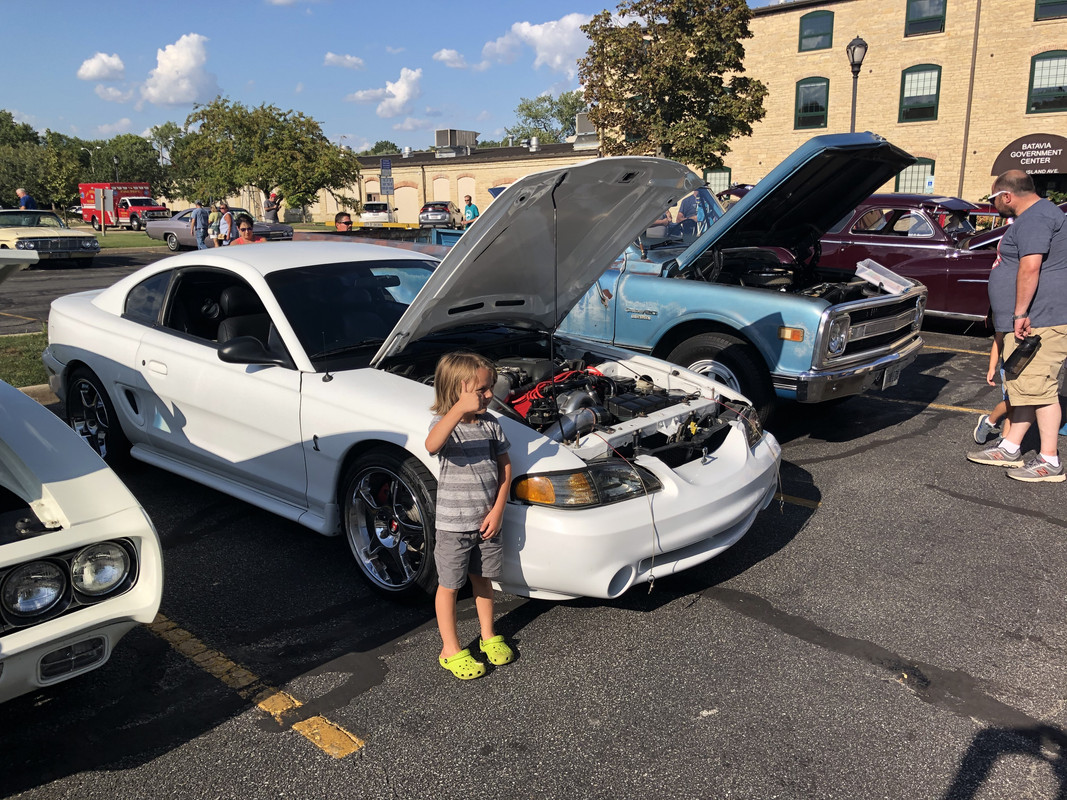