A little bit of progress this morning before the in-laws come over for lunch. 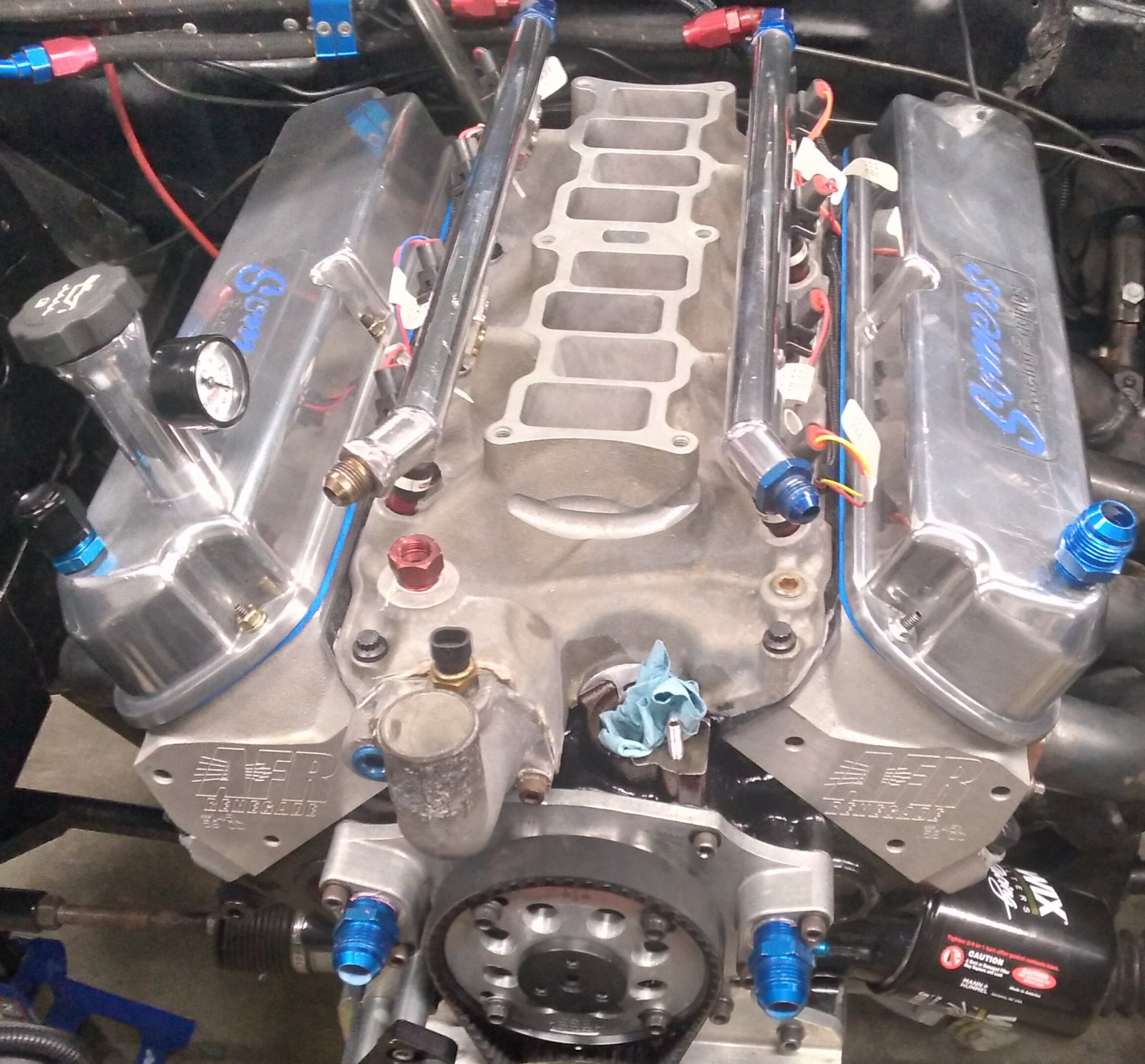 Got the headers final bolted/tightened. Installed the NGK 8 spark plugs. Gapped at .025
Like the easy access. In fact by removing a couple of the header bolts I can get to the head stud nuts with a torque wrench.
Headers are 2" to 2.125" stepped with a 4" collector.

I’m ready to hear this baby fire up! Lol

Imagine how I feel after seeing the car sit for 2 1/2 years. Lol

I hear ya man. That’s why I’m hesitant to at least replace the heads with some fresh rebuilt “DC” heads I have for my terminator. That’s just gonna open a whole can of worms when I decode to blow it apart with no end in sight. Lol. Plus the possibility of issues that you went through. Then there’s the lack of funds to throw at it too.

A little progress today. Not much energy today for working on the car. Yesterday finished a work schedule of working 10 out of the last 11 days. Plus spent 2 hrs mowing the lawn and replacing a 16' long 2x6 on the side deck and getting it stained.
Anyway, I went to Lowes on Friday night after work and picked up a 3/16" thick piece of plexiglass to mount the Dominator ECU to. Holley is pretty adamant about not letting the ECU tough metal/ground. About the only place I could find to mount the ECU was on the passenger floor. Used some 1.5" high spacers to get it up off the floor and to clear the slope in the trans tunnel. Used nutcerts in the floorpan. Those work real well. I I have a lot of harness that needs to be plugged in, wires routed ect. 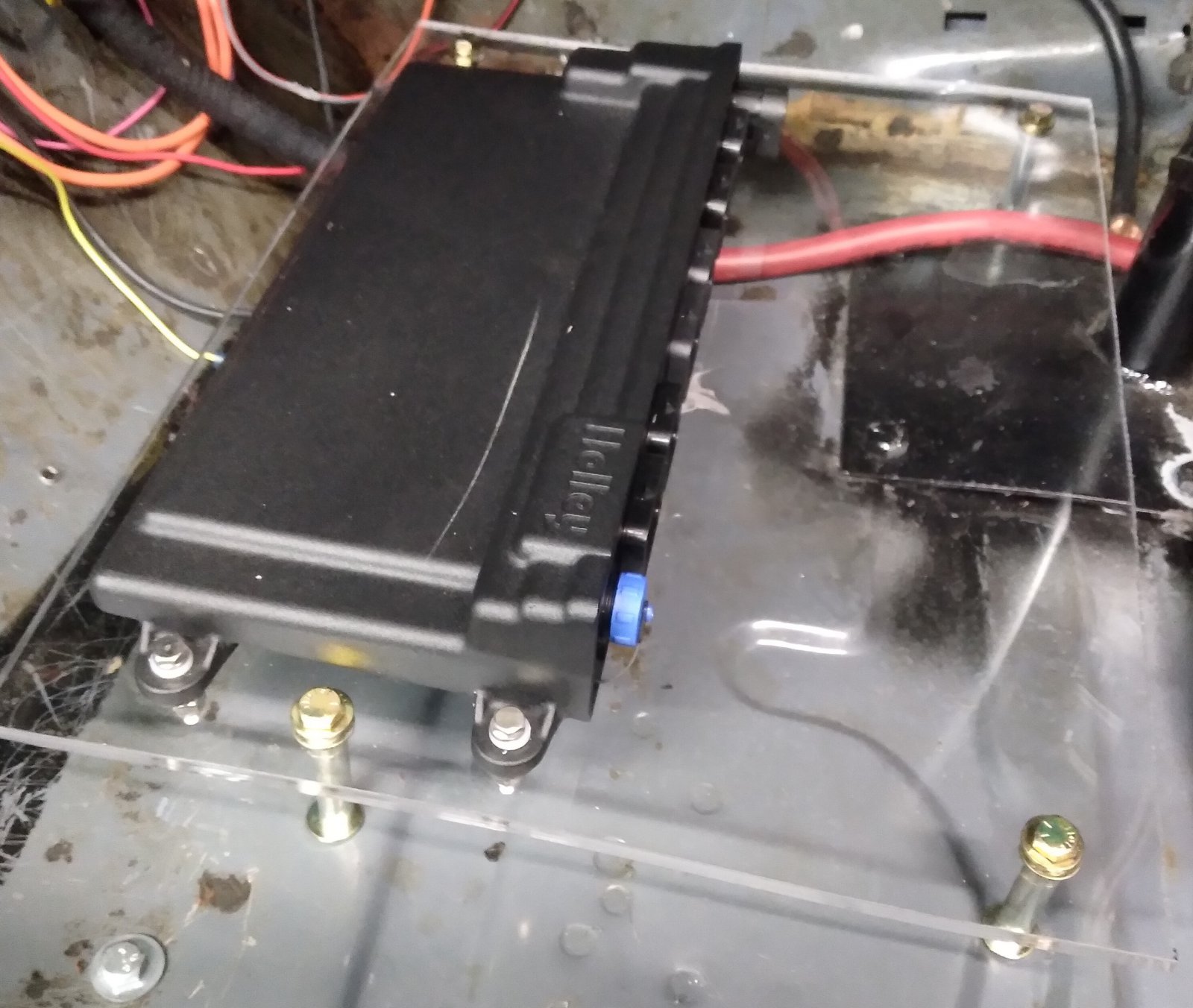 Also got some wiring done in the engine compartment, not much, but having to switch over from the Fast XFI harness connectors to Holley style for the sensors. Thought it was going to be easy as Fast uses Weatherpack connectors for sensors like Holley does. Turns out that Fast uses a Male end on the TPS and Holley uses the Female end. Or Fast uses round pins and Holley uses flat pins. The MSD crank trigger is 2 wire, the Holley crank trigger harness connector is 3 wire. Same with the distributor, I have 2 wires out of the MSD and the Holley ignition pigtail is 3 wire. Plus none of the wire colors match up. Have to do some research to find which is power/ground/signal and then make the changes. 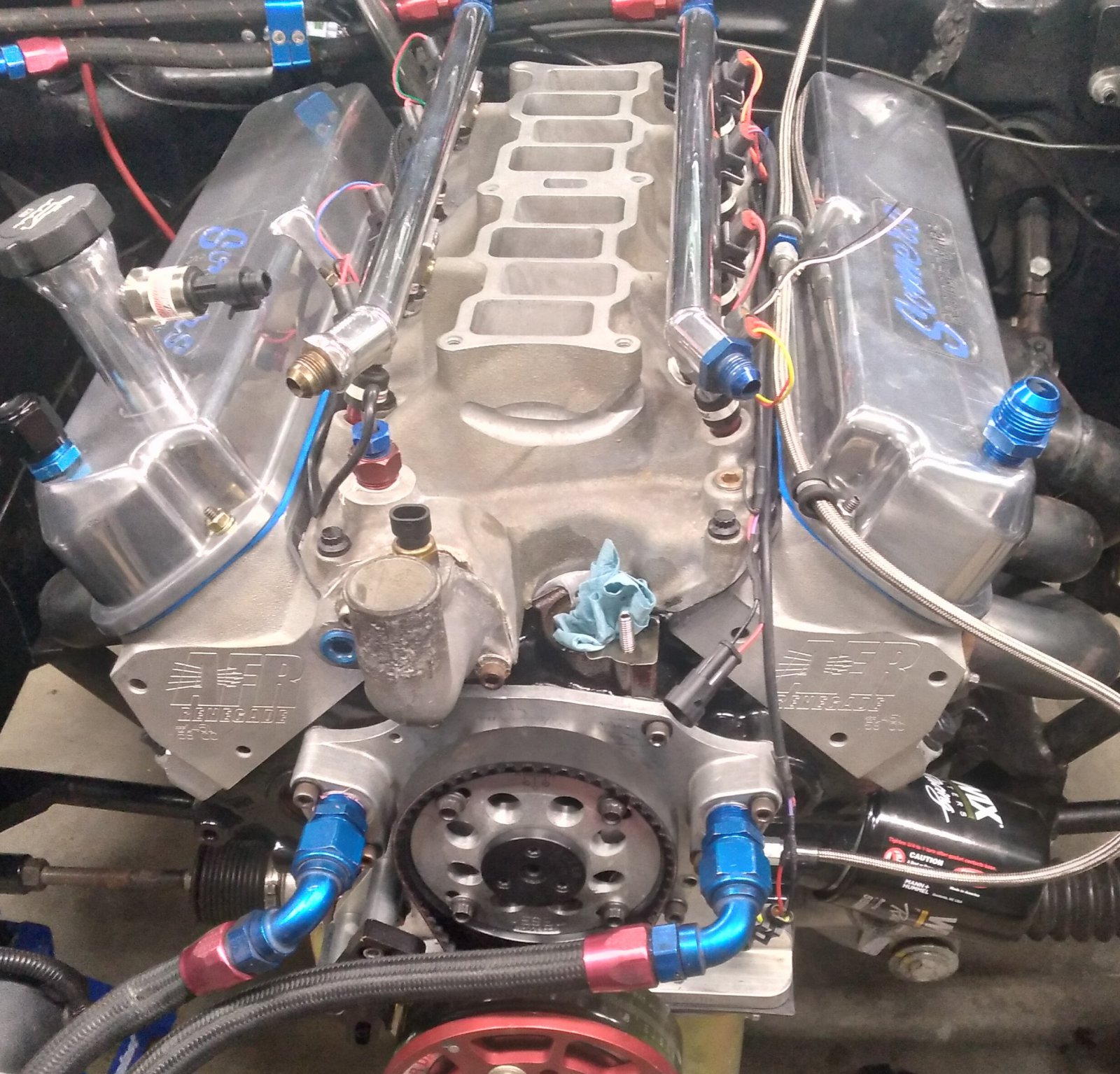 All of the wiring is done. Had to extend a couple of harnesses and change the connector ends on a few others. Turned the power on and everything works without catching on fire, so I call that a win!
I was able to install some of the front accessories drive. Still waiting on the S/C pulley to get done at the machine shop. 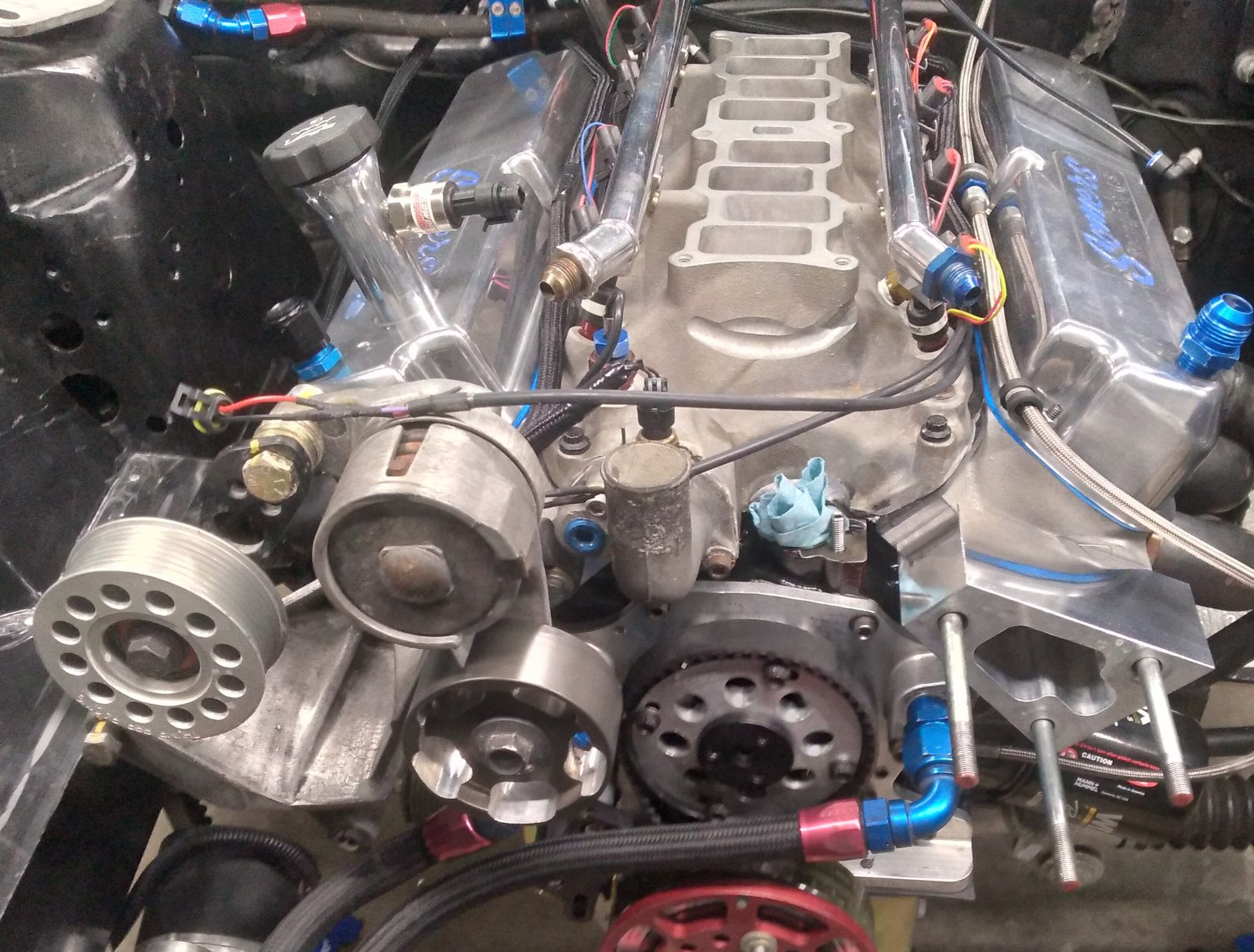 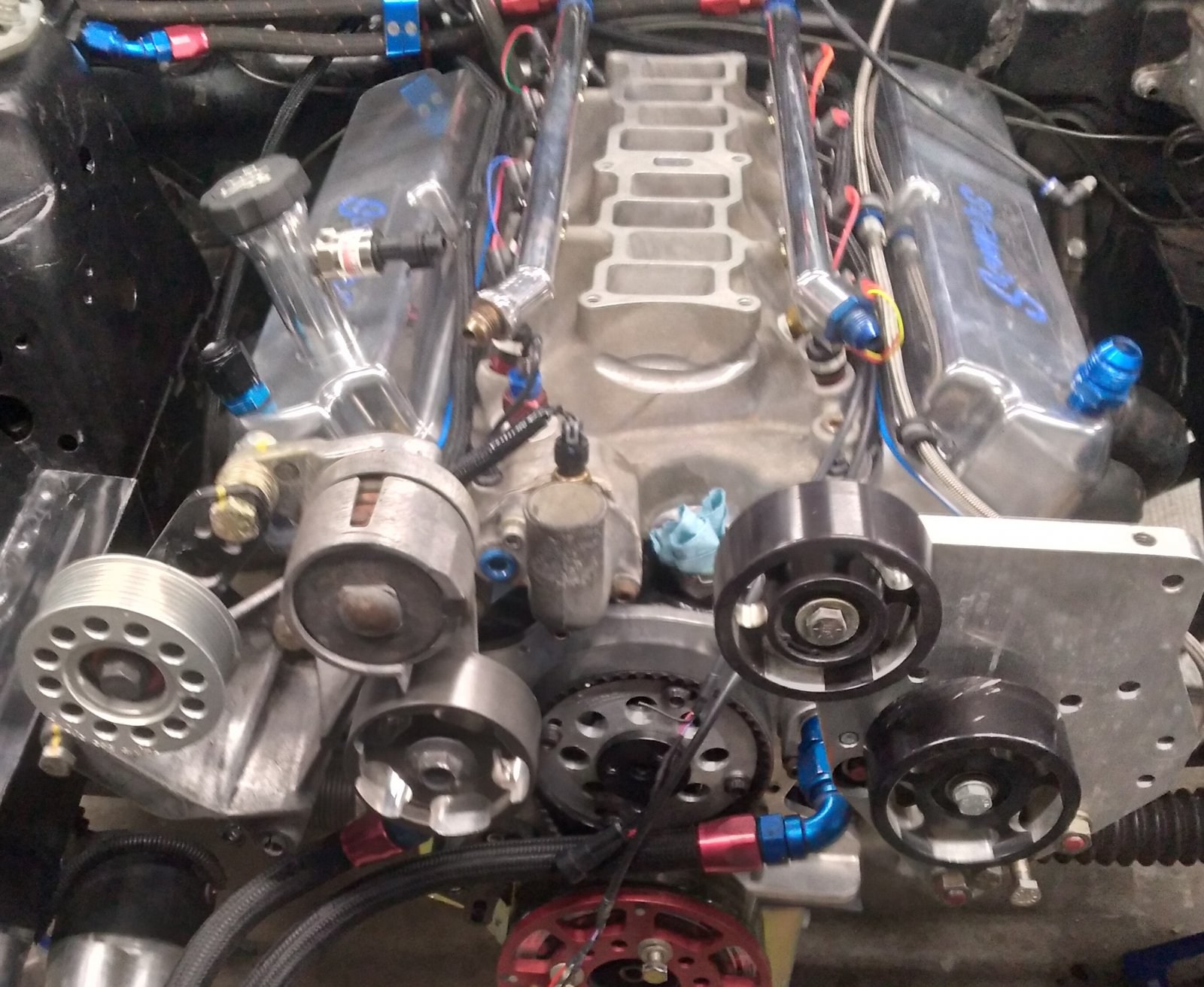 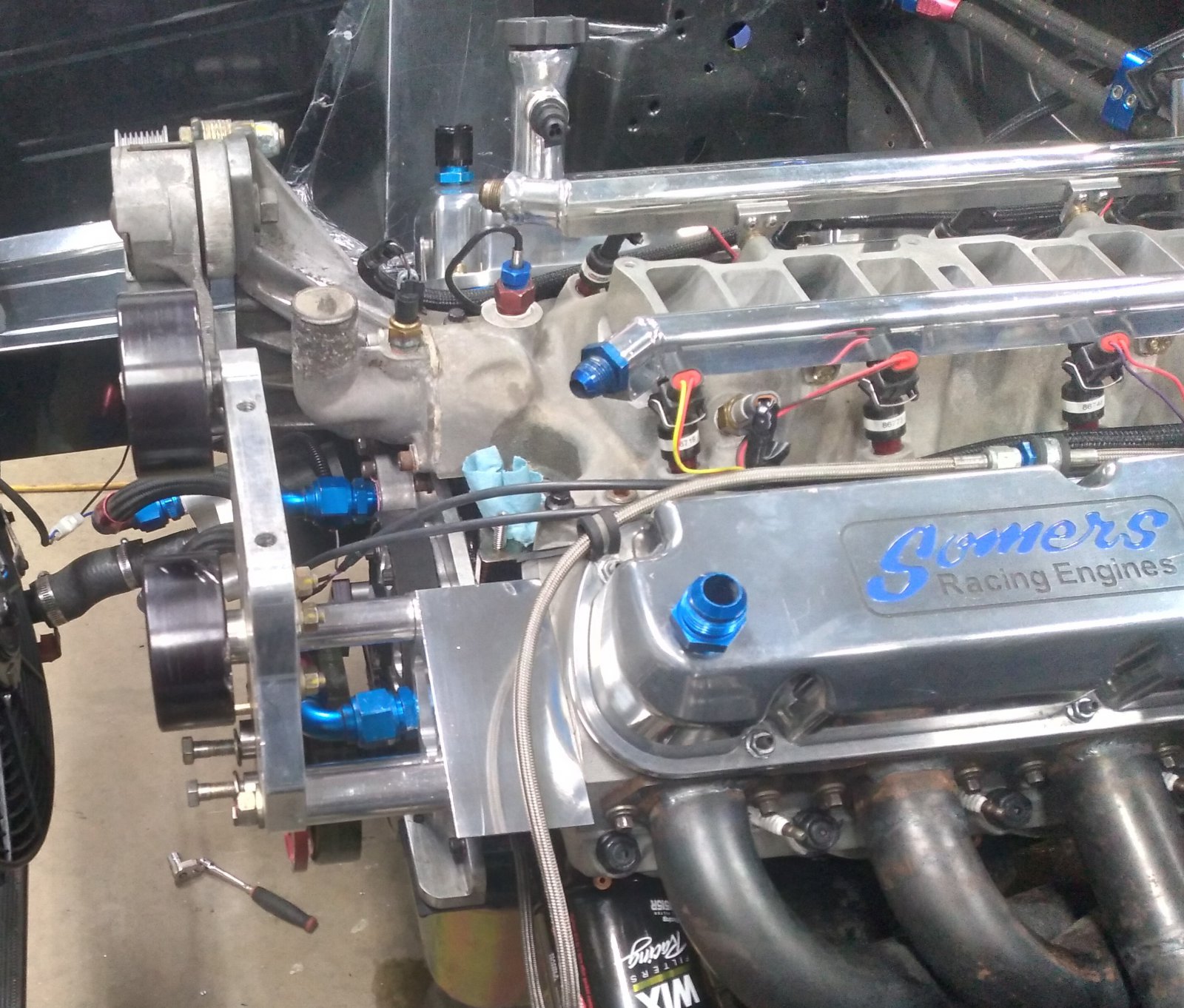 I got the laptop synced with the ECU tonight. Not much I can do as it wants to calibrate the TPS before anything else is really available for setting a base tune.
But I managed to get the upper intake on. Starting to get interesting. 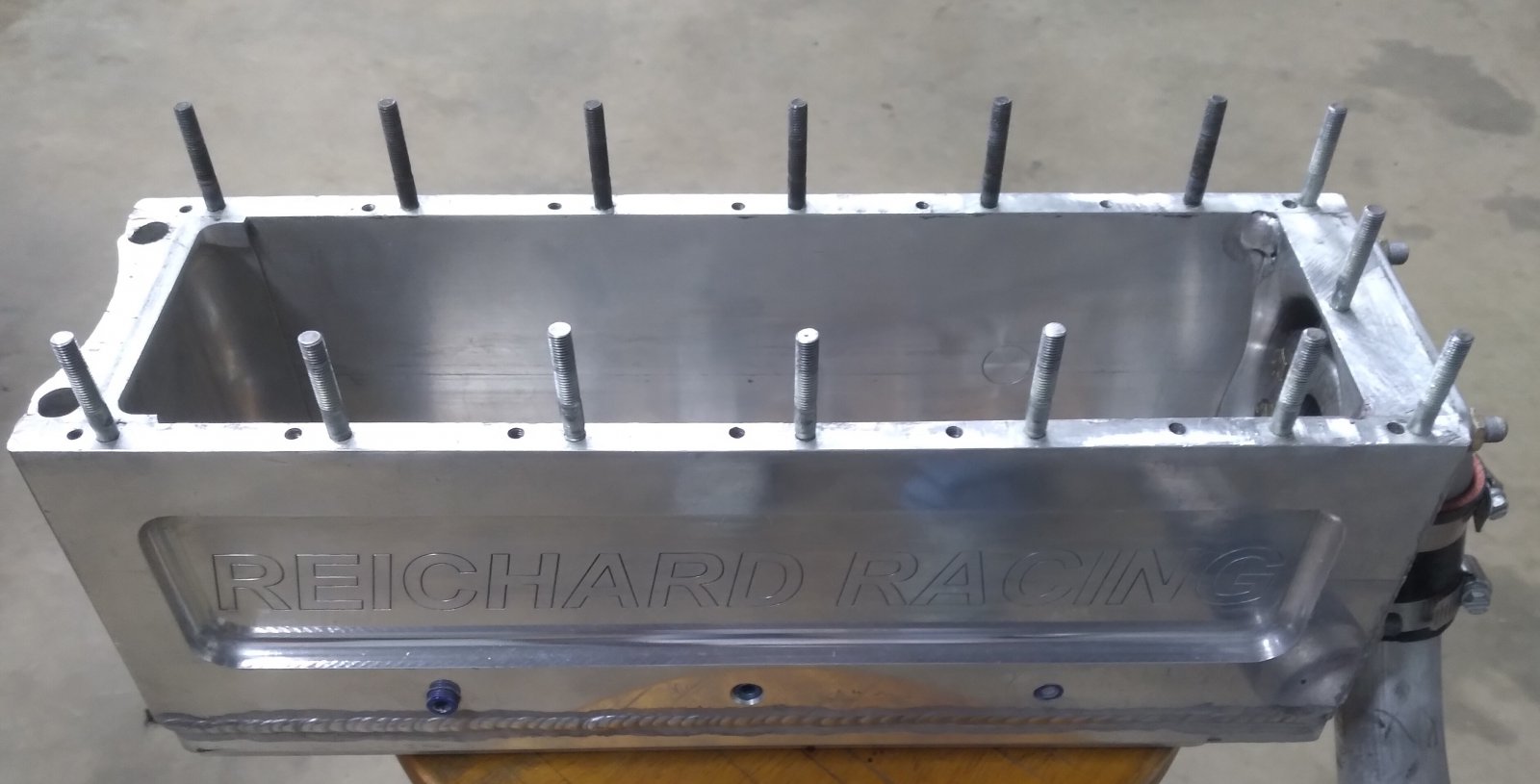 This is what goes inside that upper intake. 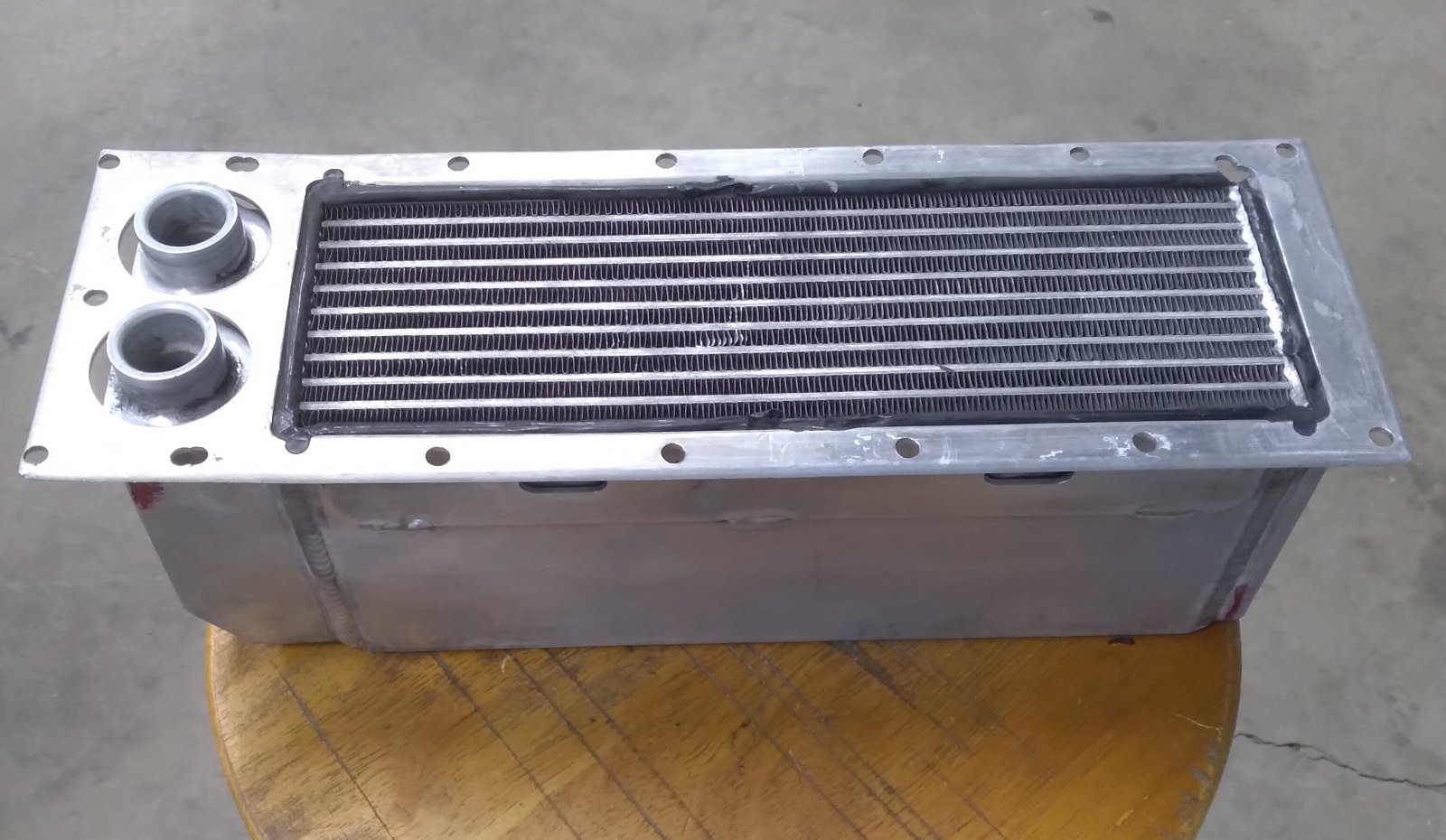 How it sits on the engine. 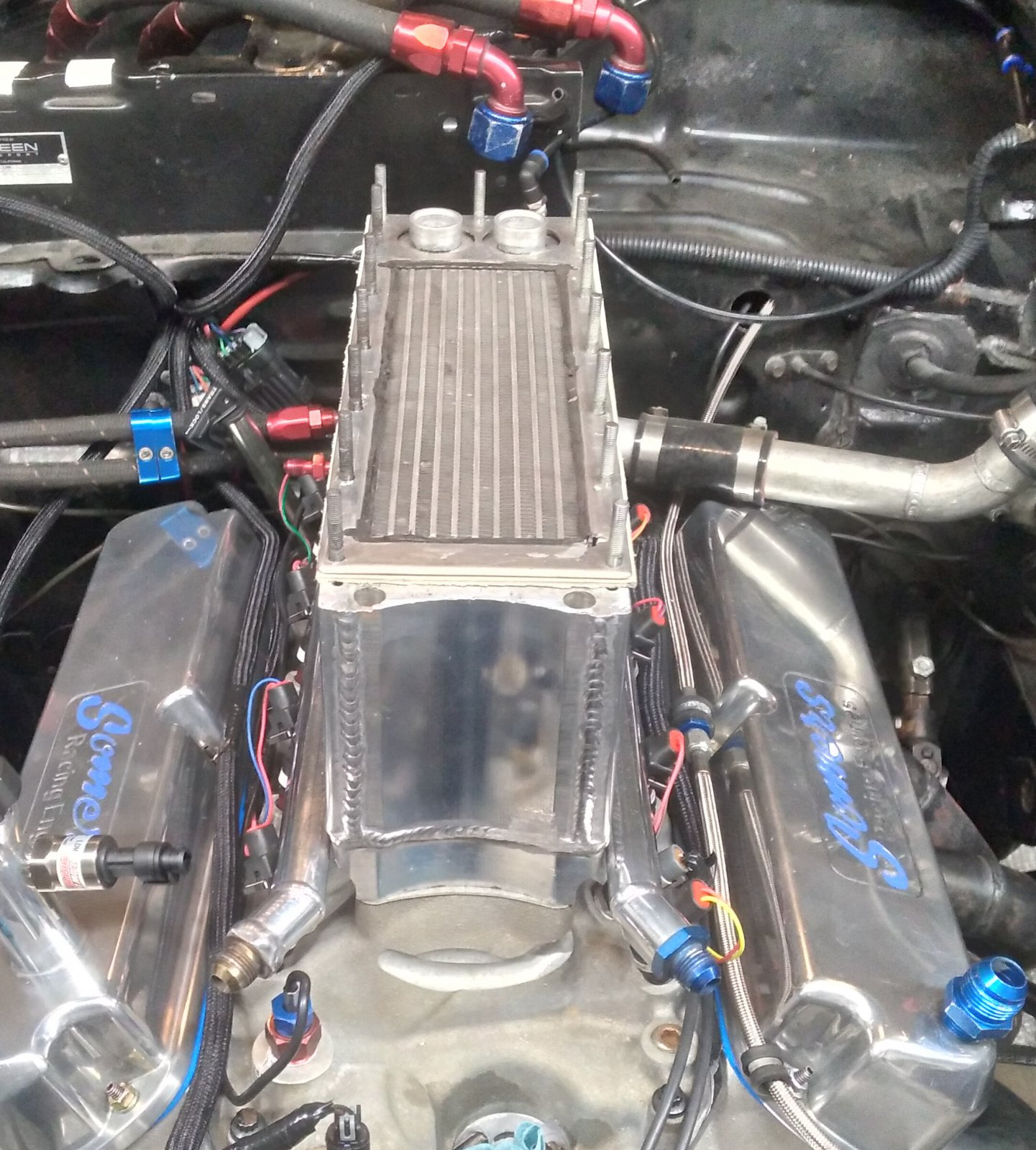 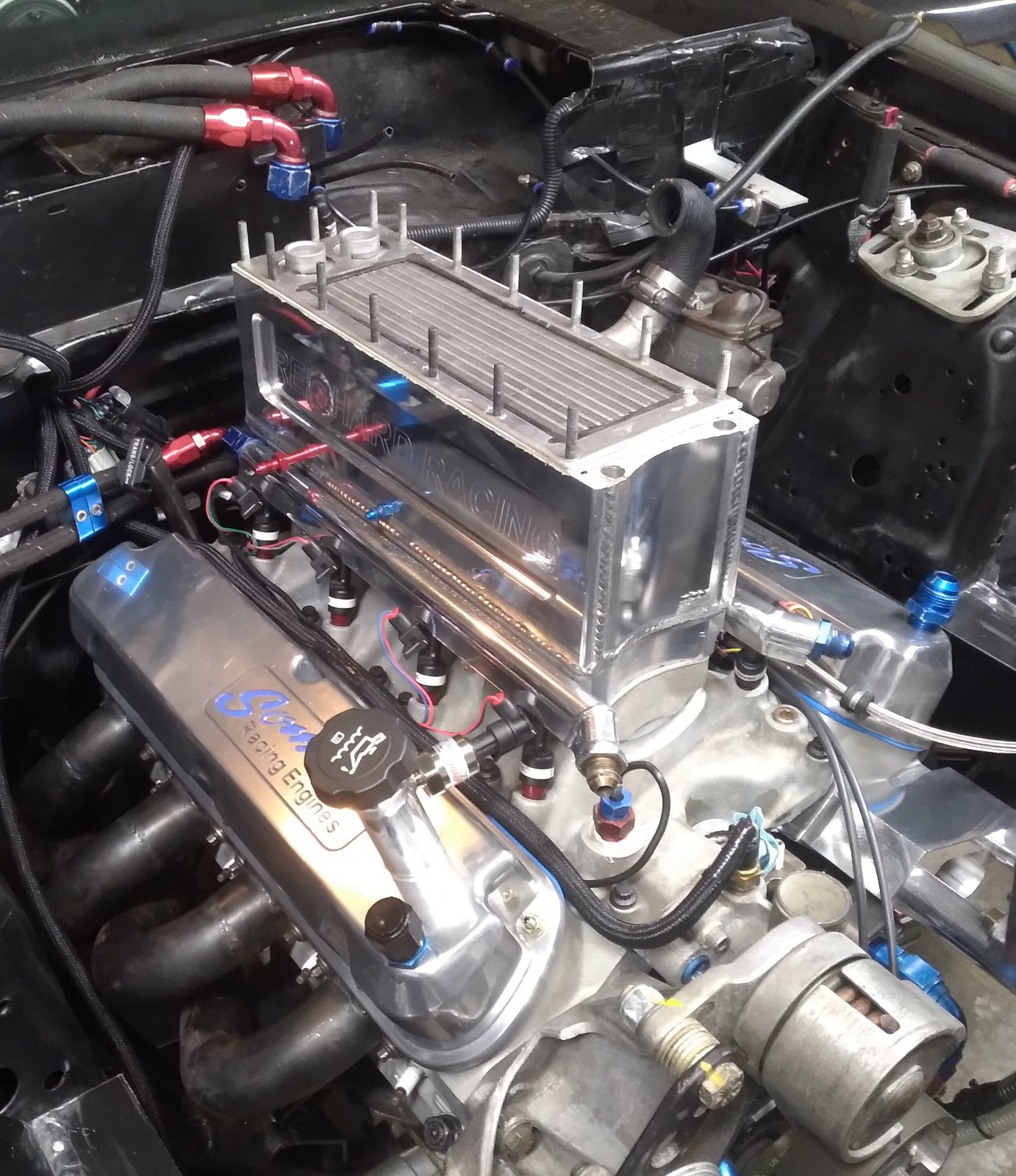 Very cool.
Looking forward to your feedback on the Holley after coming from FAST XFI.
Any way to measure boost and temp above/below that cooler brick?
Looks very similar to mod motor/4.6/5.4 combos.
-J

biminiLX said:
Very cool.
Looking forward to your feedback on the Holley after coming from FAST XFI.
Any way to measure boost and temp above/below that cooler brick?
Looks very similar to mod motor/4.6/5.4 combos.
-J
Click to expand...

I had previously logged pre I/C temps while on a dyno. The GM air charge temp sensor got pegged at around 290*F and would not register any higher. I was spinning the S/C 6K higher than recommended at the time.
I always data-log the outlet side air charge temps as that is what the ECU uses in the tune. I usually have 75-80*F temps at the start of a pass and it will finish at about 90*F or so.
Also the boost pressure drop across the I/C core is only about 1.5-2.0 psi on average. At least on a chassis dyno. I have never logged pre I/C during a pass.

That is good on the temps and better than I expected on the pressure drop.
Do you expect to have it on track this year?
-J

Yes, if all goes well. Don't see any reason for not getting out. Would take something unexpected.

Yes, if all goes well. Don't see any reason for not getting out. Would take something unexpected.

Well, it has been 2 months since the last update. I ended up sending the S/C back to Kenne Bell to get re-built as I did not like the occasional "ting" out of the S/C when I spun it over by hand. This of course happened right as I was getting ready to install the S/C on the engine. It had been sitting on a shelf for 2 plus years and you would think that I would have checked that out a long time ago and addressed it then. But nope. My dumb ass let it sit there thinking there was nothing wrong with it, after all it was working just fine when I pulled it off the car 2 plus years ago.
So I mailed it off and Kenne Bell said that it would take 4-5 weeks before they could get to it. That was a bummer. Anyway, during that 6 weeks my kids came out from the West Coast and spent 2 weeks visiting, which was great. Might as well get that done while the car is sitting.
Now that I have the S/C back, it is time to get re-started on this build.

The S/C had been stripped down to just the case when I sent it off. No need to send my custom made inlet and outlet manifolds or the custom S/C snout when they just needed to re-build the case/screws.
Here is the re-built unit I got back just this last Tuesday. 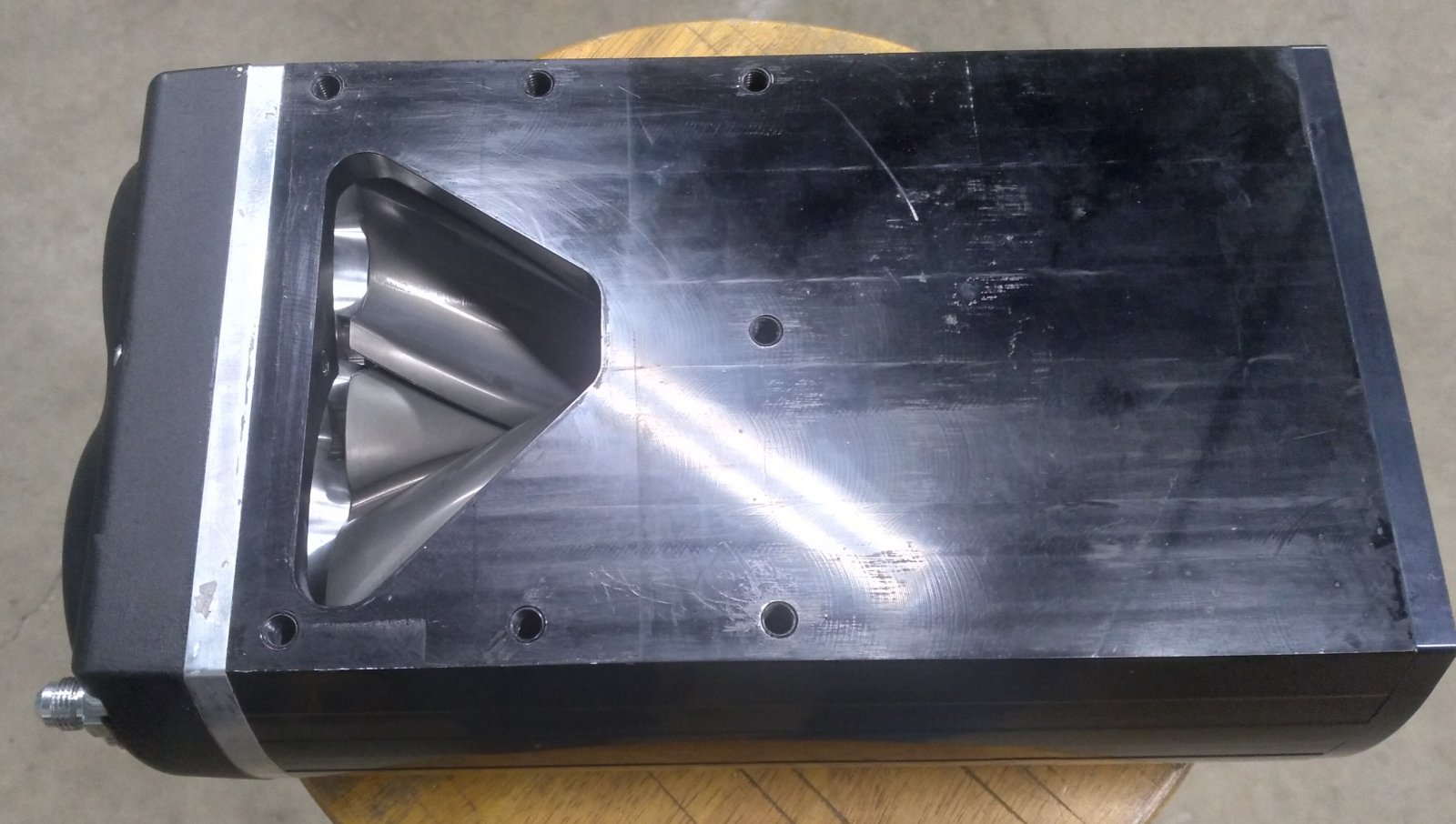