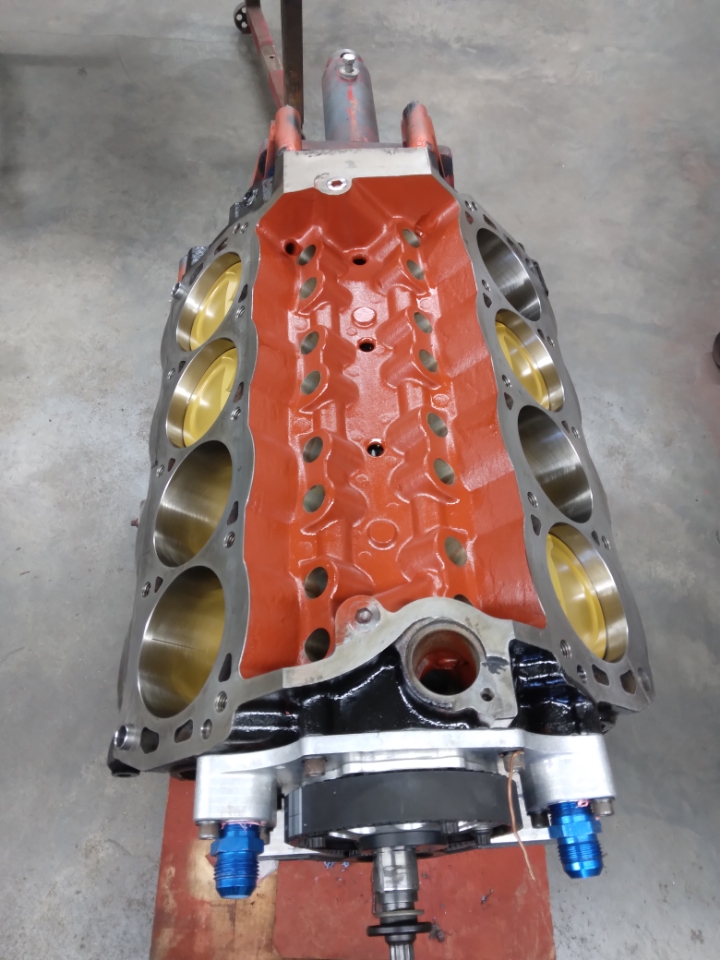 Yes Sir.
It has been a 2 1/2 year journey.
It should have been a 3-4 month journey, but the first machine shop screwed up the re-fresh and then Covid hit and it has been a nightmare getting this thing built the way it was supposed to be built.
Paying twice for the re-fresh was a massive downer.

What is your goal, time wise, for getting it back on the track?

CobraBob said:
What is your goal, time wise, for getting it back on the track?
Click to expand...

I hope to have it on the track this year. If everything goes as planned it will be end of July/first of August. Not only does the engine need to get put in the car and everything hooked back up, I need to replace the engine management system. Currently running a Fast XFI 2.0 but the last time I had the car out in 2019 the system quit data-logging. I tried everything that everyone recommended, outside of sending the ECU in for inspection to get it to work, but it will not data-log unless the laptop is hardwired to the ECU.
It is mandatory for me to see data logs with the re-fresh. I am switching to a Holley Dominator ECU. The engine has gone from 4.090 to 4.135 on the bore and the compression has gone from 9.2:1 up to 11.0:1
I am switching from Renegade Fuels E85 to One Ethanol E85 that is rated at 117 Octane.
The rear differential now has 4.30 rear gears down from the 4.10 gears. There has been about 50 lbs or so taken out of the car as well.
Lots of changes.
Excited to hear it roar again.

Holy "lots of changes", sir! Smart switch to the Holley Dominator ECU. Just curious, what octane was the Renegade Fuels E85 rated at?

That's great news. Sounds like you are back to making progress.
We need more pics!

More pics will happen when the engine makes it home. I am waiting for the Machine shop to tell me how much cash to bring, since they don't take CC or DC or checks. Once he sends me an invoice I will take a morning off work and drive down (55 miles) and load everything up.
The heads are also done, but will not be on the short block due to header install. Can't get the headers in if the heads are on the engine. 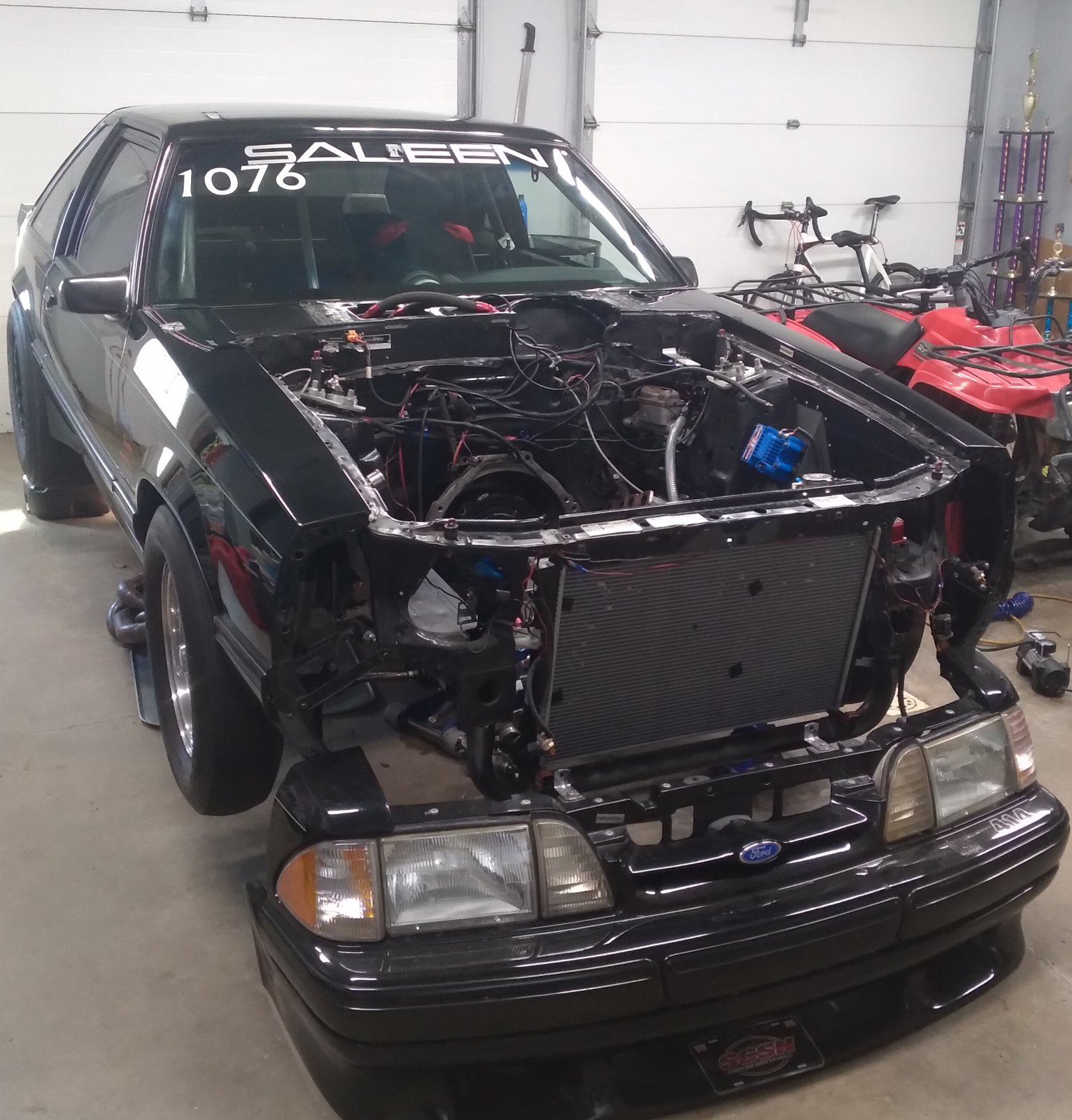 The way the car is now.

For some reason, I have to crop the hell out of the picture so it will post.

Back in Nov of 2019 I took the engine out for a re-fresh to a local Machine Shop. They are 3 miles from my house. I figured this would work out well because they are so close, what could go wrong.
Well, let me tell you.
Everything.
I dropped the engine off, along with $2,000 cash so the re-build would not be held up because of needing money for parts.
I brought a list of things I wanted done, everything itemized, all caps, double spaced.
I let it be known that if he needed money, just call/text.
I let it be known that if he was looking at something and "thought" it would be "OK" then just buy new and replace it. Period. I did not want any questionable parts being used at all. They were fine with that.
4 weeks later I dropped off another $1,500 cash to make sure they were not wanting for money to get the job done.
8 weeks after that they called and said it was ready to go. I go to pick it up and asked what the final compression was (I specifically asked for 11.0:1 +/- .1) they told me 10.6:1 I was like WTF? I asked for 11.0:1, they said that it would have taken 3 more weeks to get the pistons...
Listen dude, I live 3 miles away, you have my cell number and my E-mail address and my physical address, you could have asked.
I was loading everything up and asked where my new flexplate was. (that I had specifically asked for)
They said they could not find one. I get home and Google SBF zero balance flexplate, 157 tooth and in .376 of a second get dozens of possible buying sources. (Summit, Jegs, ect ect)
Yikes!
Gotta take the dogs for a walk, the story continues later.

Anyway, frustrated I finish loading up the short block and cyl heads and pay the final bill, another $2,700 in cash.
I get the engine home, get the short block bolted in the car and get ready to install the heads. They are AFR 220 Renegade heads and use Jesel shaft mount rockers. I need to set up the rocker pedestals on the heads and shim them before they go on the engine. I set a clean fluffy towel on the workbench to protect the freshly machined head surface and go about setting up the Jesel pedestals. I pick up the head off of the towel after I am done and there are piles of sand on the towel. I was "WTF"?
I go back to the machine shop with the heads and ask what the hell was that about. He tells me that they sandblasted the heads to clean them up and appently did not get all of the sand out. I told him that if I had installed the heads on the engine before setting up the pedestals and sand got in my engine, that he and I would be having a very different type of "conversation". He apologized... They clean out the heads and I go home to install them on the short block.

BTW, the build at that point was a 363, 4.125 bore by 3.4" stroke. The prevbious build from 5 years before was a 9.2:1 358 cid (4.090 bore) That long block cost just over $25K and ran great for over 4 years.
Back to the story/tragedy...
I set the heads on the shortblock and start installing the head studs. I get done with the passenger side, and am installing the studs on the drivers side, get all the way to the last one, bottom/rear and find out the stud will only go in halfway. So I swap it out with a different stud, inspect the threads on both studs and still, only halfway. Another WTF? Pull all of the studs out, remove the cylinder head and inspect the bolt hole and son-of-a-bitch, the bolt hole is stripped out of that hole. I am pretty pissed off at this point. Pull the engine back out and take it to the machine shop and said WTF? They instantly said "it was like that when you brought it in". I said, no it was not, and even if it was...Why TF did you not address the issue? "we forgot". BS, utter BS. They ended up heli-coiling that hole. It took them 3 days to get the right heli-coil and then I watched them do the repair.
Get the repaired block back to the house and install it back in the car and get ready to install the heads and I just sit there staring at the engine wondering WTF else did they screw up.
I got the invoice and really gave it a good look over and noticed that there was no oil pump billed. Again, I specifically asked for a new oil pump, I did not want a pump with 4+ seasons of racing on it re-used. I pull the engine back out of the car, pull the pan off, and sure as shit, the old oil pump is installed on my fresh rebuild.

It so hard to find a good shop. That is terrible. I don’t know why things can’t just get done right. This is the new trend these days.

Last part of the story for today.
I spend 2-3 weeks trying to find a reputable shop in the area. Mind you, when this story first started, I had only been in Maine for just over a year. I knew no one in the area and all of the good builds at the local racetrack had all sent their engines to North Carolina or some such. I was really tempted to send the engine all the way back to the Seattle area to the original builder, but the cost in shipping and the possibility of something happening to the engine going back and forth from Maine to Washington was a gamble I did not want to take.
I finally found a machine shop 50 or so miles away that specialized in Fords. Talked to the owner and got good vibes. Dropped the engine off in May of 2020 right at the start of "Covid", local track was shut down for the year, so told the guy, no hurry, gave him the background on the engine and told him to go over it with a fine tooth comb. What he found pisses me off to this day. The cylinders are not true, there is a lot of taper, the piston is tight at the bottom of the bore and loose at the top. The so called "valve grind" on the heads that I paid $450 for a "competition" valve grind had run out on all of the seats averaging around .006 which is horrible. Should be within .0005.
The valves needed to be replaced due to the fact that they were at the end of their service life.
Turns out the previous "machine shop" did not bore and hone the block with torque plates like I asked.
So now the engine needed to be bored out an additional .010 to 4.135 from the 4.125. So it is now 365 cid. Prices have gone up since this all started. The JE pistons I paid for on the 363 build were $1,500 with the thermal barrier coating on top and anti-friction coating on the skirts. The new pistons (finally at 11.0:1) also with the coatings, now cost $2,000
The stainless intake and Inconel exhaust valves came in at just over $1,000.
The current machine shop is also double pining the camshaft and providing a new oil pump and head gaskets.
It has not been all peaches and cream at this shop as the engine has been there for just over 2 years at this point.
That is a different story.
Grrrrrr.

Going down Friday morning to pick the engine up. Pics to follow.

I have new JE pistons for a 363 SBF. 4.125 bore. For Sale.
Thermal barrier coating on top and anti-friction coating on skirts.
10.5:1 compression with a 56/57 cc head.
If anyone is interested PM me.
I spent over $1,500 for these. They were installed in a short block, but the heads were never bolted down,
Full float piston/pin. 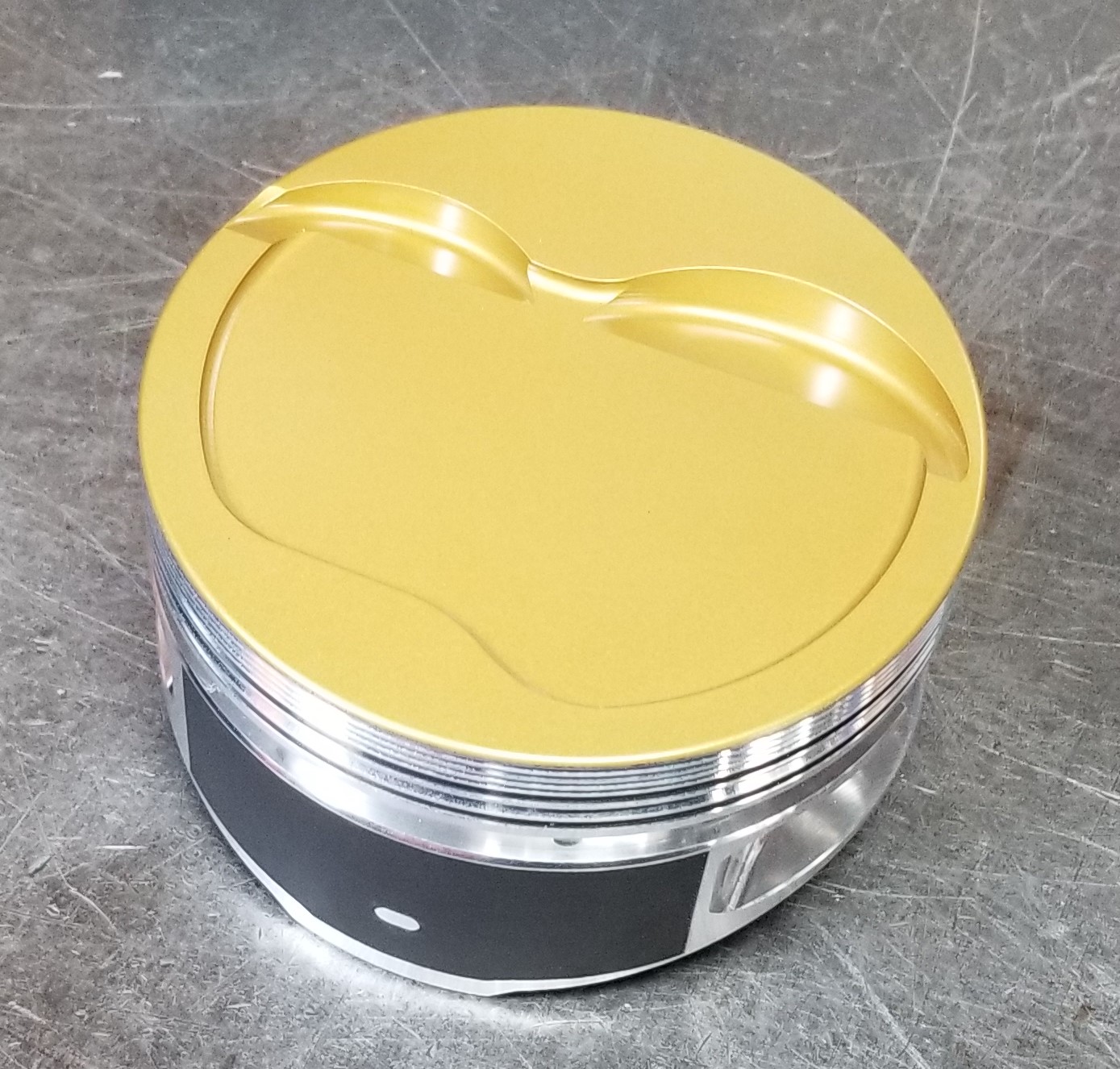 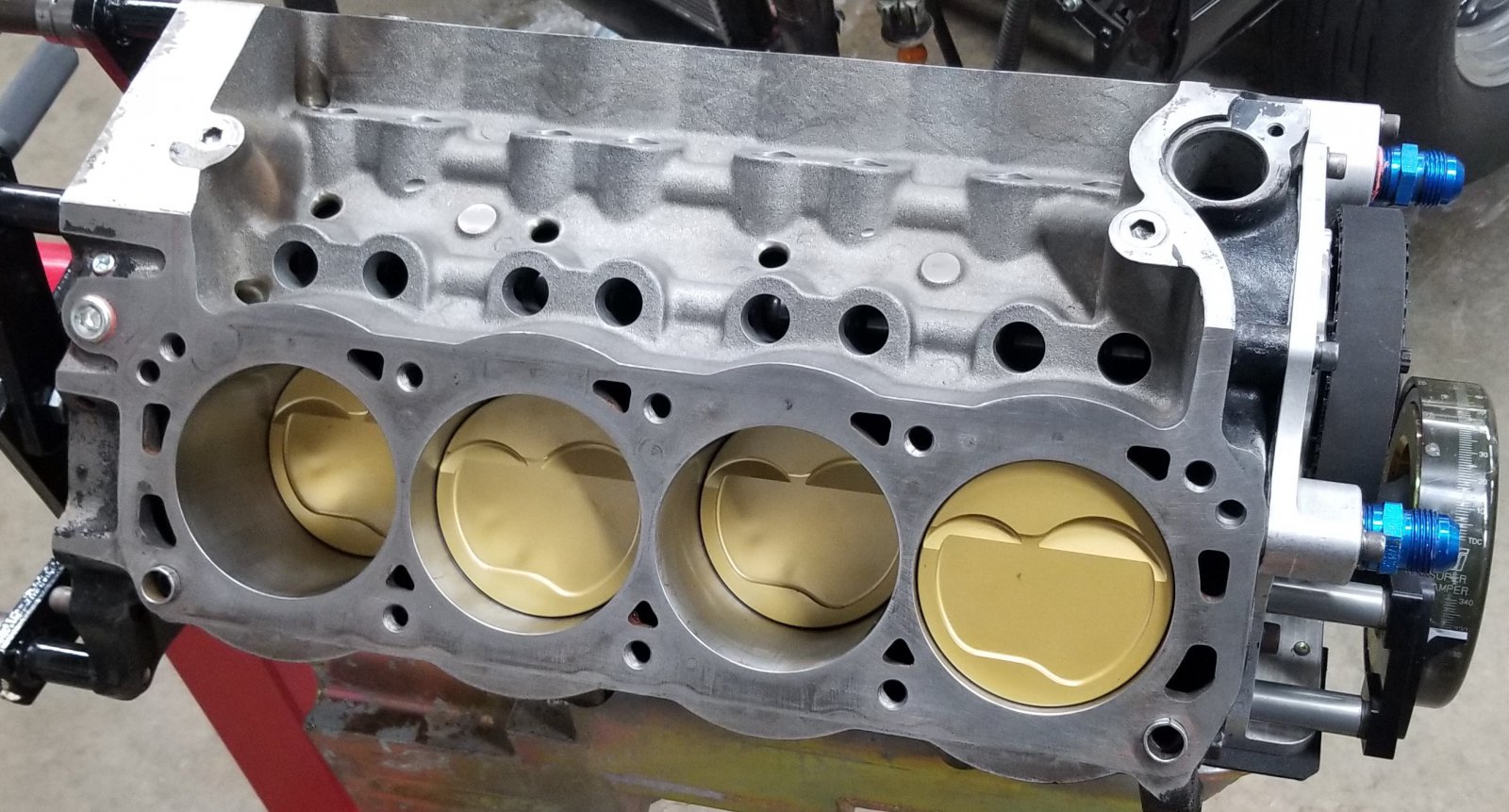