Viewing only articles categorized with "Tech".

A few months back we took a look under the hood of the 2019 Ford Ranger and found something that appeared to be a bit out of place. It appears that Ford Engineers found that the mid-size truck’s 2.3L EcoBoost engine required an EGR Cooler in order to meet modern emissions regulations. Turns out that EGR Coolers are finding their way onto all sorts of new Ford engines.

Recently, we were taking a look at a 2020 F-150 equipped with the 2.7L EcoBoost and tuned by 5-Star tuning. While it was an awesome little ride, we couldn’t help but notice that Ford had snuck an EGR Cooler under the hood. It appears that these direct-injected turbo engines may be a bit dirtier than their “Eco” name would lead you to believe. Considering that the dead-nuts simple 7.3L gas V8 gets by without the need for EGR at all (yes, I know emissions regs vary based on GVRW). Click Here to Continue Reading...
Continue...
Heavy Metal | F-350 Super Duty Odyssey Battery Install
6 3,642 by SID297 : Aug 11, 2020 at 11:36 AM

Sooner or later, the unending march of time is going to kill your factory flooded-cell batteries. Sure, you can prolong their life with proper storage and maintenance techniques; but in the end time always wins. That was the issue I found myself facing a few years back with the factory Motorcraft batteries in my 6.4L Powerstroke equipped 2009 F-350. After ~7 years of used the originals were showing the “Red Dot of Death”. All-in-all, they lived a good life. It’s hard to ask for more than service life they provided, but it was time for an upgrade.

Over years of motorsports and off-road/marine experience I’ve come to trust the Odyssey brand of AGM batteries. They can be somewhat expensive; but they deliver massive cranking amps, deep draw capabilities, can last over a decade, and are tougher than a $2 steak. I’ve been using one of their power sports batteries for well over 10 years in a Jet-ski and it has never let me down. So picking up a set of Odyssey AGMs for my Super Duty was a no-brainer. Click Here to Continue Reading...
Continue...
S&B Super Duty Cab Mounts | Never Install OEM Junk Again
23 8,458 by SID297 : Jul 8, 2020 at 1:48 PM

For over two decades the Ford Super Duty line of trucks have continued to raise the bar for heavy-duty work truck performance and comfort. And while there have been a few stumbling points along the way (6.0 cooling system and 6.4 flame thrower come to mind) the Duty has marched steadily towards higher levels of performance and quality throughout the years. Unfortunately, the issue that leads us to this review is one of those engineering quality missteps I mentioned. Thankfully, the guys at S&B have created the ultimate solution to this particular problem.

For the 2005 model year, Ford switch from using traditional rubber cab mounts to a new style made from urethane foam. The impetus from this change was the reduction of NVH, and while there may have been some nearly imperceptible benefits there were some seriously deleterious side-effects. The issue is these factory urethane foam bushings essentially disintegrate over time. I have heard that atmospheric ozone contributes to the deterioration, but no matter what they will fail over time. That was the situation I recently found myself in. Click Here to Continue Reading...
Continue...
S550 Supercharger Shakeup | From Edlebrock 2650 TVS to Whipple Gen 5 3.0L
17 6,709 by S550_Steve : Jun 17, 2020 at 11:30 AM 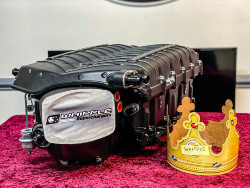 In case you guys missed it, let me catch you up. SVTP has been working with VMP Performance to test the performance increases we can squeeze out of the recently released 2020 Shelby GT500 Mustang with some typical bolt-on parts and tuning. After seeing some impressive stock boost level gains, both at the track and on the dyno, it was time to test out a classic Mustang mod; a JLT Cold Air Intake.

The SVTP community is well aware that a CAI is a member of the holy trinity of basic bolt-on mods for any car (intake, tune, and exhaust for the uninitiated). And for close to twenty years the folks at JLT have been churning out some of the Ford Performance Nation’s favorite kits. The styling and materials of the kits may have changed some over the years, but JLT’s share of the intake market continues to grow. Part of that growth is due to their commitment to performance and the speed at which they introduce kits. Modern 3D printing has cut design and production times significantly, which leads us to the star of this feature. Click Here to Continue Reading...
Continue...
2020 Shelby GT500 | Modding and Testing VMP's Project Snowbird
32 12,145 by SID297 : Feb 19, 2020 at 1:32 PM

I know you guys have been waiting for this. The 2020 GT500 has already proven to be a supremely impressive addition to Ford Performance family of vehicles. But this is SVTP, you know we never leave anything stock for long. So we teamed up with the supercharger experts at VMP Performance to cover some up the preliminary build up of their project Predator. When we arrived, the car was already equipped with a ported supercharger courtesy of Jokerz Performance. Other than the blower, the car was stock.

So the first order of business was to strap the Twister Orange Mustang to rollers and set a baseline. He above setup netted us 680 RWHP, but the interesting thing we noticed was the power starting to drop off once the engine reached 7,700 RPM. VMP’s Justin Starkey believed it was due to restriction in the suction side of the intake tract. We would soon find out just how true that theory was. We decided to ditch the factory airbox lid to see if that freed things up a bit. There’s been a rumor that opening things up could make things interesting. Check out this video: Click Here to Continue Reading...
Continue...
MT-82 Manual Transmission Oil Change | Amsoil MTF
13 5,640 by SID297 : Feb 5, 2020 at 10:40 AM

Love it or hate it, the MT-82 is the transmission that brought six gears to the masses in the Mustang market. Before it, buyers were required to step up to one of the halo performance model Pony cars in order to row through more than five speeds. The Getrag box has plenty of pluses, but it did get off to a bit of a rocky start. Thankfully, we like modding here on SVTP.

One of the biggest complaints the MT-82 received early on was sketchy gear engagement that differed based on temperature. It seemed that the factory synchros were particularly sensitive to oil viscosity, and Ford filled the MT-82 with a fairly lightweight oil from the factory. That was fine for cold weather and average daily driving. However; during hot summer months, and especially on the road track, the oil would get so thin that several shift issues would pop up.
Continue...
WTF??? | Ford EcoBoost Engines Now Have EGR Coolers
13 8,100 by SID297 : Jan 27, 2020 at 12:56 PM

Well this is a new one. We recently had a 2019 Ford Ranger FX4 in for testing. For those unfamiliar with the specs of Ford's reborn small'ish truck, it is currently only available with a 2.3L EcoBoost 4-Cylinder engine and the 10R80 10-Speed Auto. That mill has proven to be pretty stout in tuned Mustang application dating back to 2015, and there are a few guys turning them up in Rangers too.

However, as I was poking around under the hood of our test truck I noticed something odd. Ford is equipping the Ranger's 2.3L with an Exhaust Gas Recirculation ("EGR") system that also includes a tiny EGR Cooler. By now you probably know that clogged EGR Coolers have led to the early death of countless diesels over the years, and I've never seen one fitted to a Ford gas motor. Nonetheless, there it sits. I thought technology had progressed passed the need for EGR on gas motors in general. It appears I was wrong, and 'diesel like' emissions systems are now being fitted to gas motors. Let's hope we don't start seeing Gasoline Particulate Filters ("GPFs") next: Click Here to Continue Reading...
Continue...
Justin Starkey Fills Us in About VMP's Odin 2.65L TVS Supercharger
19 8,539 by SID297 : Dec 18, 2019 at 12:39 PM

We just got back from PRI 2019 and we have a lot of information to share with you. On top of Ford Performance releasing thier new 'Werewolf' Iron Coyote Block, this year's show was the first chance for many to lay eyes on @VMP Performance's 2.65L TVS Supercharger. We were on hand to get some pics of the blower from a few angles you may not have seen. Plus; the man behind the product, Justin Starkey, took the time to share some design details with us. If you like massive intercooler cores and serious power potential I think you'll be pleased. Check it out: Click Here to Continue Reading...
Continue...
Whipple or Kenne Bell? | What Are We Looking At?
16 5,631 by SID297 : Oct 10, 2019 at 11:05 AM

Whipple or Kenne Bell? | What Are We Looking At?

If you’ve been in the performance community for any decent period of time some things just become instantly recognizable. To a gearheads ears here’s no mistaking the sound of a blow-off valve bleeding off some boost pressure or the piercing tones of a Coyote powered Mustang with some Borla Stingers. Similarly, we all know that Kenne Bell blowers are massive blocks of billet aluminum bolted to your favorite engine, while a Whipple Supercharger features a ribbed cast aluminum case. And then there’s this:

No, your eyes are not deceiving you. What we have here is a relic of the past, from a time when Whipple and Kenne Bell were just starting in the supercharger business. A time when the two companies were more closely related than you might think. The founders of each company, Art Whipple and Jim Bell, we both prominent racers in the California performance scene throughout the 60s and 70s. Both had their own corners of the performance market, but both saw untapped potential in the aftermarket twin-screw supercharger business. Click Here to Continue Reading...
Continue...
Page 2 of 3