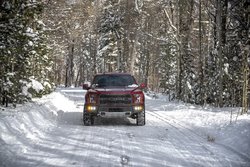 Winter is here, and there's no better way to enjoy some fresh powder than hitting the slopes in a new Ford F-150 Raptor. For one SVTP Member that means heading out to Lake Tahoe for some 4X4 Action in the snow. It looks like a great way to spend a cold afternoon. Click Here to Continue Reading...
Continue...
Ford Bronco Store Now Live on Amazon.com
15 1,894 by SID297 : Dec 2, 2019 at 2:01 PM

The all-new Ford Bronco isn’t slated to make its world premiere until next spring, but Bronco lovers don’t have to wait until then to find merchandise to celebrate the legendary off-road SUV.

In time for Cyber Monday and the heart of the holiday shopping season, the Ford Bronco store on Amazon.com is live with an assortment of Bronco-themed items ranging from apparel and novelties to toys, collectibles and some unique vintage Bronco parts.
Continue...
All Electric Mach-E SUV is Officially in the "Mustang Family"
131 8,441 by SID297 : Nov 14, 2019 at 8:05 AM

All Electric Mach-E SUV is Officially in the "Mustang Family"

Ford’s all-new, all-electric SUV will don the iconic pony badge and the name Mustang Mach-E when reservations for the vehicle open after it is revealed this Sunday.

The Mustang Mach-E will make its debut Nov. 17 at an event in Los Angeles that will be streamed on YouTube, Facebook, Twitter and Autohome (China). Special guest, actor Idris Elba, will help introduce the latest addition to the Mustang family. Immediately following the broadcast – which ends at approximately 6:30 p.m. PST (9:30 p.m. EST) – reservations will open for the Mustang Mach-E at Ford.com. Click Here to Continue Reading...
Continue...
Supply is Running Out | Go Buy a New Fiesta ST Now!!!
38 4,456 by SID297 : Nov 13, 2019 at 9:47 AM

I’m going to let you guys in on a little secret. The Ford Fiesta ST is dollar for dollar one of the most fun new cars you can buy today. However, that isn’t going to be true for much longer. The sad fact is that in a few short weeks the supply for brand new Fiesta STs on dealer lots in the US will be gone. According to SVTP Member @13COBRA, as of 11/12/19 there are only 195 new ones out there. In Ford’s infinite wisdom they have made the decision that the Stateside crowd will not be getting the updated 2020 Fiesta ST model with its heavily revamped interior. So if you want a new one, time is running out and here is why you should care.

“Life is too short to drive a car that sucks.” That simple maxim is just a fact. So why would you waste your time in something mundane when you could be driving a Ford Fiesta ST? The FiST, as owners have taken to calling it, is simply put has the best dollar-to-fun ratio on the market today. Don’t believe me? Just ask anyone who owns one, or take a look at this thread: Click Here to Continue Reading...
Continue...
Ford Drops the Prototype Bronco R Baja Race Truck
2 2,001 by SID297 : Nov 7, 2019 at 11:16 AM 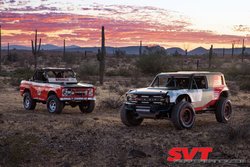 It was built for this, its engine roaring through the heat of the Mojave and its racing tires spraying desert sand. As the last grain settled, the vehicle that is all at once a tribute and a test and a tease, came in to focus. It was no mirage. Bronco – in the form of a race-inspired Bronco R prototype – is back.

As a tribute, it was appropriately parked alongside the Bronco that Rod Hall and Larry Minor famously drove to an overall win 50 years ago at the 1969 Baja 1000 – a victory that no other 4x4 has replicated. Featuring a race livery inspired by Hall’s winning vehicle, Bronco R passes the torch to off-road racer Shelby Hall, Rod’s granddaughter, who will drive it for portions of this year’s prestigious race in honor of her late grandfather. Click Here to Continue Reading...
Continue...
Two New Performance Ford Rangers from RTR Vehicles debut at SEMA 2019
6 1,621 by SID297 : Nov 7, 2019 at 10:55 AM 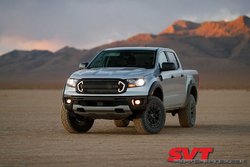 With the Ford Mustang RTR and F-150 RTR having solidified their place in the market, RTR Vehicles debuts the new 2020 Ford Ranger RTR, the second pickup truck offering and third Ford vehicle model available for purchase today on rtrvehicles.com and at select Ford dealers globally. The new Ranger RTR is able to be built on almost any Ranger trim level available through Ford and comes with RTR’s signature style and Tactical Performance Packages.

Entering the mid-size truck market for the first time, the Ranger RTR represents all of RTR Vehicles’ learnings from the F-150 RTR into a smaller, more nimble, and capable off-road package. The Ranger RTR is immediately recognized by its signature RTR grille with LED lighting, enhanced fender flares—the fronts, which include functional vents acting as intake induction points Click Here to Continue Reading...
Continue...
Ford Performance, SEMA, and Jay Leno Build a 5.2L Predator Powered RestoMod Bronco
10 1,704 by SID297 : Nov 7, 2019 at 10:41 AM 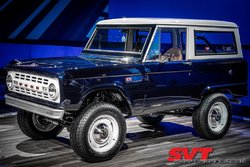 In terms of gag gifts, it was a good one – perfect, in fact, for a classic car enthusiast. Now years later, it will finally get the attention it deserves.

The 1968 Ford Bronco wagon was left for Jay Leno as a joke, arranged by fellow late-night TV host Craig Ferguson to be parked in Leno’s spot on the eve of his last taping. Ferguson was unaware of the iconic status of the Bronco – and had no idea how highly sought after these models are. But long-time car collector Leno knew. He happily accepted the gift which ended up sitting in his garage unrestored until recently. Click here to Continue Reading...
Continue...
Mod Nationals : A Race Weekend that Demands Attention
17 3,459 by SID297 : Nov 6, 2019 at 9:47 AM 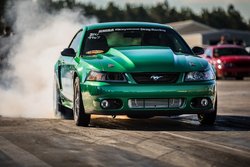 In 2016 Justin Young and Ozzy Moya set out to create a new Modular V8 based drag racing event to do one thing, take care of the racers. It’s been nearly 30 Years since Ford’s Modular Engine family made its inauspicious debut in the form of a 190HP Non-PI 2V 4.6L in a 1991 Lincoln Town Car. In that time it’s gone from being seen as poor follow-up to its pushrod predecessor to the preeminent bolt-on power production platform in modern Pony Cars. Still, modular powered cars are often underrepresented in other drag racing series. That’s what makes Modular Nationals different.

Justin and friends are Modular performance enthusiasts to the core. Like many of us older Millennials (Were you born in the early 80’s?) we grew up in a world of multi-port EFI and over-head-cams. These things were viewed by us as benefits, not hindrances. And let’s face it, there’s no domestic V8 engine platform out there that is more synonymous boosted performance than the Ford Modular. Just think about it, how many 800+ RWHP Coyotes are do you know about running around out there? Just how fast are those cars? How fast is yours? There’s one way to know, get out on to the track. Click here to Continue Reading...
Continue...
Full Electric Mustang is Closer Than You Think
41 4,684 by SID297 : Nov 6, 2019 at 9:12 AM 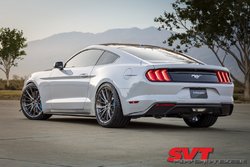 Full Electric Mustang is Closer Than You Think

Ford and Webasto today reveal Mustang Lithium, an ultra-high-performance battery electric Mustang fastback prototype. With more than 1,000 ft.-lbs. of torque and more than 900 horsepower instantaneously available, this Mustang amps muscle car performance to a new level and helps gauge the level of interest the next wave of performance customers have in lightning-quick performance that only fully electric powertrains can deliver.

The Mustang Lithium build is not only a one-off prototype to showcase electrification on the world’s best-selling sports car but also a testbed for battery and thermal management technologies Webasto and Ford are creating for the growing e-mobility automotive segment. Click here to Continue Reading...
Continue...
Custom Built F-150s and Mustangs Headed to SEMA 2019
0 1,717 by SID297 : Nov 1, 2019 at 11:24 AM

Ford F-150 and Mustang remain two of the most beloved nameplates on roads everywhere, including roads that lead to the annual Specialty Equipment Market Association show.

“It wouldn’t be a SEMA show without some F-150 and Mustang love from our builder partners,” said Eric Cin, global director, Ford Vehicle Personalization and Accessories. “These two iconic nameplates are always the most popular Ford vehicles throughout the show and each of these builds gives a refreshed glimpse at some of the latest trends in customization.” Click Here to Continue Reading...
Continue...
Page 2 of 68